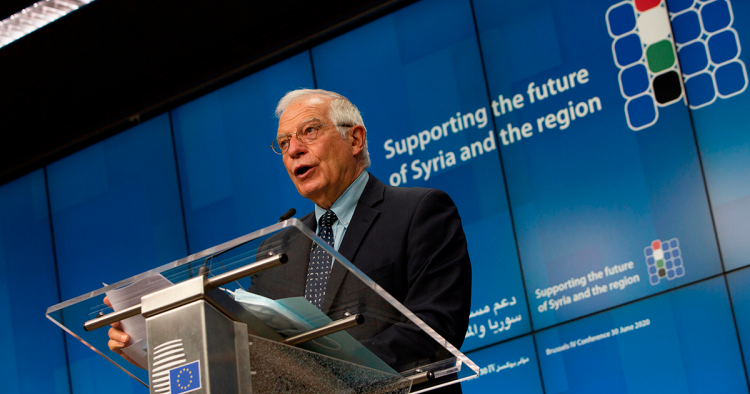 The conflict in Syria has been going on for over a decade. That is long enough for the international community to become desensitized to any negative news from the country. As has been the case for several years now, pro-government forces control most of the territory, aside from pockets of the north, and there are more and more questions about the future of the Syrian state and its relations with the rest of the world. This is as true for the European Union (EU) as it is for other major international actors.

EU institutions and individual member states remain committed to the peaceful settlement of the conflict, but after 10 years the question of what to do next seems most pressing. Will the EU be a passive bystander, idly watching the actions of other international players like Russia, China, Iran, or Saudi Arabia, or will it take on a more active role? And what would such a role look like? To answer these questions, it is worth analyzing the EU's current involvement in Syria and exploring what its leaders could do to make the EU’s stance more effective.

From a European point of view, the most important issue when it comes to Syria is security. This is not only about potential military or, more likely, terrorist threats, but also those related to population migration and the refugee crisis. Most European politicians treat refugees as a matter of concern, but at the same time EU institutions are doing everything they can to help them in the countries neighboring Syria, rather than permitting them to enter the EU itself. The agreement concluded between the EU and Turkey in June is the best example of this. The EU is even ready to turn a blind eye to the actions taken by President Recep Tayyip Erdoğan in Turkey if it helps keep the potential threat of another migration crisis away from its borders. However, it is worth emphasizing that as a result of this, the EU is the largest aid donor to those affected by the war. It has provided nearly €25 billion to support Syrians since 2011. Moreover, it has also organized annual conferences on “Supporting the future of Syria and the region” in Brussels since 2017. During the last one, in March of this year, the international community pledged €5.3 billion for Syria and the neighboring states hosting Syrian refugees.

The threat of a migration crisis does not change the fact that the EU continues to pay attention to potential terrorist threats. Attacks by militants linked to ISIS in years past left their mark on the actions and attitudes of leading EU politicians. In June 2021, Josep Borrell Fontelles, the high representative of the EU for foreign affairs and security policy, attended the Ministerial Meeting of the Global Coalition against Daesh, declaring with other ministers that “a comprehensive and collective effort remains necessary to achieve a full and enduring defeat of Daesh/ISIS worldwide.” Although ISIS has lost its territorial base in Syria and Iraq, the EU does not downplay the ongoing threat posed by this terrorist organization and is ready to cooperate with any entity that shares its position on the matter.

While EU countries have the necessary capital, experience, and human resources to be involved in Syria’s post-war reconstruction, as long as the country is ruled by President Bashar al-Assad, that seems unlikely to happen. It is difficult to imagine that Assad would allow European companies and social organizations to operate in Syria. He certainly remembers the clear commitment of some EU countries, especially France, to taking action against him. For its part, the EU does not intend to support the reconstruction process while Assad remains in power to avoid legitimizing his rule. In March 2021, on the occasion of the 10th anniversary of the outbreak of the conflict, Borrell made this clear in an article on his blog, writing, “There will be no end to sanctions, no normalization, no support for reconstruction until a political transition is underway. This is the long-standing position of the European Union.”

Despite the EU’s inability to engage in conflict resolution in Syria itself, EU institutions have not ignored the situation and they do try to actively support various projects and counter potential threats, such as another migration crisis or terrorist attacks. Of course, the question is whether more can be done. So far, the facts suggest that due to the lack of direct relations between the EU and President Assad and the dominant influence of countries like Russia and Iran in Syria, it is difficult to imagine that EU countries could do much more, especially in the political sphere.

Borrell remains of the position that only Syrians should negotiate the terms of a peace agreement and has come out against initiatives taken by other countries, especially those that try to bypass the United Nations. As the high representative wrote in his recently published book, “The future of Syria is for the Syrians to decide. The political negotiations on Syria’s future must be Syrian-owned and Syrian-led. How Syria will look like a year from now will depend on the commitment of the regime to the implementation of the UN Security Council Resolution 2254. Not for our benefit, not for theirs or their supporters’, but for the benefit of all Syrians” (Borrell, 2021: 195). However, one may wonder whether such a position is an expression of helplessness and awareness of the EU’s lack of influence on the course of events in Syria, or whether it results from Borrell’s own idealistic attitude. Despite the EU’s significant commitment to humanitarian aid, there are many indications that the former is closer to the truth. The EU is, at least for now, a passive bystander.

What can the EU do?

So what could European leaders do to make the EU’s stance more constructive and effective? The EU should seek an agreement with key external players supporting Assad to put more political pressure on him regarding respect for human rights and the formation of a compromise transitional government. This applies primarily to countries supporting the Astana peace process. In the case of Russia, this could only happen as part of a broader discussion on a number of contentious issues, in particular the situation in Ukraine. In the case of Iran, however, the EU has significant investment and economic leverage. Extending the negotiations on the nuclear program to include the issue of Iranian involvement in the conflicts in Syria and Yemen would be possible if the Iranians received EU support for their efforts to lift U.S. sanctions, along with clear declarations of planned investment inflows. If, at the same time, U.S. support for these initiatives could be obtained in exchange for security guarantees from Iran in the broader Middle East region, the EU could be the guarantor of such a regional compromise. The most serious obstacle, however, may be Assad's future. It is very unlikely that the EU will stop pushing for accountability for war crimes, human rights abuses, and violations of international humanitarian law, including the confirmed use of chemical weapons mentioned in its 2017 strategy on Syria. However, Assad’s foreign backers might not defend him if their broader geopolitical and economic interests were secured.