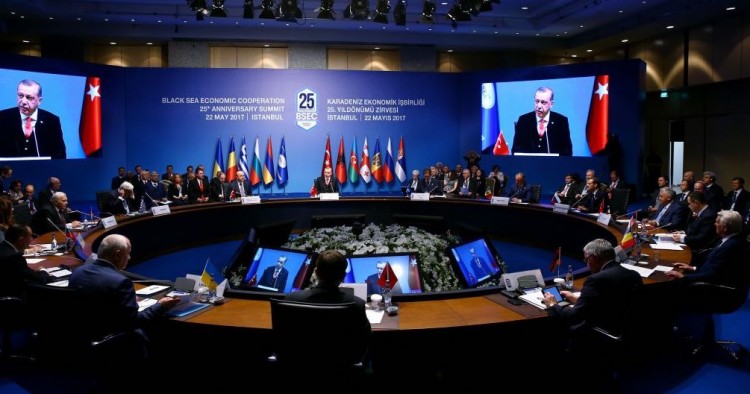 The European Union’s interest in the Black Sea is based mainly on the fact that two of its members, Romania and Bulgaria, are littoral states. However, the organization is also closely linked with other non-EU Black Sea states, be it economically or politically. Ukraine and Georgia aspire to be EU members while Russia and Turkey both have their own unique and difficult relationships with the EU.

The Black Sea is an important region for the EU for a variety of reasons, from economics and security to energy and transportation. Hundreds of miles of pipelines and fiber-optic cables crisscross the bed of the Black Sea. Major European ports are an important source of economic activity in the region. The largest port in the Black Sea, the Port of Constanța, is in Romania. The mouth of the Danube River, which for centuries has served as a key economic and trade artery for Central and Eastern Europe, is located in the Black Sea.

The Black Sea also serves as an important junction between Europe and Asia. As both continents try to interconnect more closely for economic and trade purposes, the Black Sea region will become more critical than ever.

The EU’s institutional relationships with countries in the Black Sea region are complicated. Relations with Ukraine and Georgia are carried out within the Eastern Partnership (EaP) framework. Created in 2009, the EaP governs the EU’s relationships with six post-Soviet states in Eastern Europe. Since Russia's annexation of Crimea in 2014, the EU’s relations with Russia have been fraught and increasingly defined by economic sanctions rather than regional cooperation. Meanwhile, Turkey and the EU have had a rollercoaster relationship in recent years. Although once promised EU membership, Turkey seems as distant as ever from this goal thanks to major policy differences on issues ranging from Syria and Cyprus to refugees and human rights.

In addition to the EU's institutional involvement in the region, there are also Black Sea subgroupings that  include EU member states but are not exclusive to the EU. For example, the Black Sea Euroregion and Black Sea Economic Cooperation (BSEC) Council.

Unlike the Euroregion, the BSCE is more regional and not limited to the EU. Founded in 1992 as a Turkish initiative, the Council currently has 11 full members and another 14 observers, including the United States. Three EU countries are full members (Greece, Romania, and Bulgaria) and another 10 are observers. Romania currently holds the six-month-long BSEC chairmanship.

Security and the Three Seas Initiative

There are two main issues in the Black Sea region that warrant closer EU attention.

The first is linked to security and Russia’s illegal occupations in the region. Since 2008, Russia has illegally occupied the Georgian region of Abkhazia, which has a long coastline on the Black Sea. Since 2014, it has also occupied the Ukrainian peninsula of Crimea, situated in the heart of the Black Sea. In total, Russia occupies approximately 13,000 square miles of territory — an area about the size of Maryland.

In the case of Crimea, Russia illegally annexed the territory and considers it part of the Russian Federation. Russia has recognized Abkhazia as an independent and sovereign state since 2008. The only other countries to do so are Syria, Nicaragua, Venezuela, and Nauru.

The EU’s approach to the illegal occupations in the Black Sea region has been a source of friction inside the organization. Sadly, other than promoting a non-recognition policy regarding Abkhazia, the EU does very little to change the situation on the ground. In response to the Crimean crisis, Brussels has been able to maintain support for economic sanctions against Russia, but it is beginning to waver in some EU countries.

The second issue of focus is the Three Seas Initiative (3SI). Launched in 2016, the 3SI’s main purpose is to strengthen trade, infrastructure, energy, and political cooperation among EU countries bordering the Adriatic Sea, the Baltic Sea, and the Black Sea.

In terms of infrastructure, the region lags behind Western Europe. Moreover, a legacy of the Cold War and the Soviet-dominated Warsaw Pact is that infrastructure runs east to west, which stymies greater regional interconnectedness.

This is why the 3SI is focused on developing north-south connections, such as pipelines, roads, railways, and electrical grids. It is hoped that this will spur economic growth, prosperity, and security. Under the right circumstances, this north-south corridor in Eastern Europe could one day become the backbone of Europe.

Currently, only EU members are part of the 3SI, but this will eventually need to change. It is inconceivable that Central and Eastern Europe could improve its interconnectivity without the full involvement of Black Sea countries like Georgia or Ukraine. This is especially true when considering cross-Black Sea projects.

The current U.S. administration has been a strong backer of the 3SI. In 2017, President Donald Trump became the first U.S. president to attend a 3SI meeting. And, at the recent Munich Security Conference, Secretary of State Mike Pompeo announced an American commitment of $1 billion to the Three Seas Investment Fund.

The EU must now step up to the plate. In the early days of the 3SI, Brussels was lukewarm about the idea because the EU is generally against regional groupings on the continent convening outside its institutional framework. However, the EU has recently shown more support for the initiative and Brussels should match, if not exceed, the U.S. financial commitment.

The EU has policy competence on issues of energy, trade, and the environment — not military issues. Therefore, one policy area in the Black Sea the EU should stay clear of is hard security. The maritime security and military matters pertaining to the region are best left to NATO or individual member states. Thankfully, the EU seems to understand this limitation. Although the official Black Sea Synergy Initiative strategy document mentions the issue of security, it is relegated to only one paragraph and is within the context of Crimea and the importance of territorial integrity.

The Black Sea will remain an important region for the EU for the foreseeable future. This is why continued European unity on the issue of maintaining Russian sanctions, improving regional economic and infrastructure projects, and building relations with friendly countries like Georgia and Ukraine is so important.

Ultimately, if the Black Sea is safe, secure, and prosperous, Europe will be too.