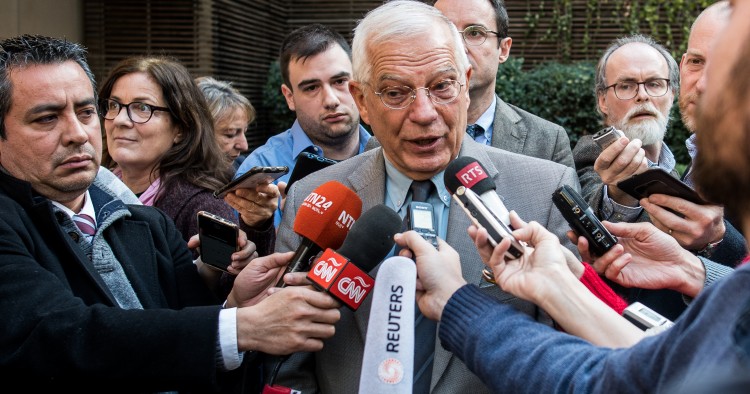 Spain’s foreign minister, Josep Borrell Fontelles, became the EU’s high representative for foreign affairs and security policy on Dec. 1. His appointment by the incoming president of the European Commission, Ursula von der Leyen, was among the most surprising nominations. Borrell’s comments on EU foreign policy have often been controversial, and he has been highly critical of the union’s diplomatic actions in the past. Now that the Spaniard has replaced Federica Mogherini, what might this mean for EU-MENA affairs? What are Borrell’s views on key regional issues, such as the Israeli-Palestinian conflict, relations with Iran, the situation in Syria, and migration?

Borrell replaces Mogherini as the EU’s representative in the Middle East Quartet. Although this forum has been somewhat ineffective so far, he could try to resume constructive cooperation with the other partners, namely the UN, the U.S., and Russia. The Israeli-Palestinian conflict will likely constitute one of the main diplomatic challenges for the new high representative. During a European Parliament hearing in October, Borrell confirmed the EU’s support for a two-state solution and said that he does not consider such a position to be anti-Israeli or anti-Semitic. It was a very direct declaration that the EU will continue its support for the peace process. Although a two-state solution is not in line with Israel’s expectations, there is nothing to indicate that the incoming commissioner will modify this position, and the reason is obvious: There is still no consensus among member states on the issue.

Borrell was skeptical about the role the EU played in the Iran nuclear deal talks in 2015. In his opinion, “the nuclear agreement with Iran was the work of four countries. Even though the top EU representative was there, it was not, institutionally, a European operation.” However, contrary to the position of the Trump administration, Borrell fully supports the implementation of the nuclear-related provisions of the Joint Comprehensive Plan of Action (JCPOA), as the Iran nuclear deal is officially known. “It is important for us to keep Iran fully compliant with its commitments under the JCPOA,” he said in June 2019. “We will continue to work in this direction with our member states and with the rest of the international community.” Borrell’s past comments on Iran created controversies in both the U.S. and Europe. For instance, in February he praised the Iranian revolution on its 40th anniversary for bringing about improvements in literacy and education for women. He also said that Iran had played an “essential role” in stabilization in Syria.

By this, he probably meant that the EU has been a peripheral actor in the Syrian conflict since 2011. Although the union was engaged in diplomatic efforts, such as co-chairing the third conference on “Supporting the Future of Syria and the Region” in February 2019, such limited actions have not resulted in any political breakthroughs. The new commissioner will have a chance to change this. He has already shown that he is ready to take action and make the union’s voice heard. For instance, Borrell criticized the Turkish military intervention in northern Syria in October 2019. He also advocated actions to stop the sale of arms to Turkey. Yet one should bear in mind as well that he once praised the Turkish authorities and the role they played in the search for a political solution to the conflict in Syria. It is therefore very likely that Borrell — similarly to Mogherini — will try to address Turkey’s security concerns through diplomatic means. The EU undoubtedly still needs Ankara’s assistance in controlling the influx of immigrants.

Borrell’s opinions on immigration to Europe are firm. He recognizes the importance of interdependence between internal and external processes. In this context, the migration flows from MENA countries to the EU still pose a significant challenge to most member states, especially Greece and Spain. Yet Borrell does not only focus on the consequences of migration; he also values the EU’s cooperation with other countries in this field. In April 2019 he said, “The people who were trying to reach Italy are now trying to come to Spain — the fact that there are not more coming is due to the partnership with Morocco, which is much more collaborative than what we could expect from the Libyans.” This demonstrates that Borrell is aware of the significance of EU cooperation with MENA countries on migration issues, which could be good news for major transit states such as Morocco, Lebanon, Libya, and Turkey.

Most of Borrell’s actions and declarations indicate that he will attempt to continue the policies of Mogherini. Yet he may also try to strengthen European independence from current U.S. policy in the region. In September he wrote that “the ‘America First’ posture of the Trump administration has overturned this central feature of the multilateral rules-based international order and the EU must now develop its own strategic autonomy and strategic culture.” Might this hint at a significant change in the EU’s foreign policy? Taking into account Brussels’ potential cooperation with the U.S. in the MENA region, it is more likely that the new commissioner will wait for the outcome of the U.S. presidential election in November 2020. If Donald Trump is re-elected, the difference in positions on various international issues will remain. Meanwhile, Borrell will do his best to save the nuclear deal with Iran, promote a two-state solution to the Israeli-Palestinian issue, look for a systemic response to the problem of migration, and pursue his own vision for the political future of Syria.