Explaining the Military's Ruling Ambition in Egypt and Thailand 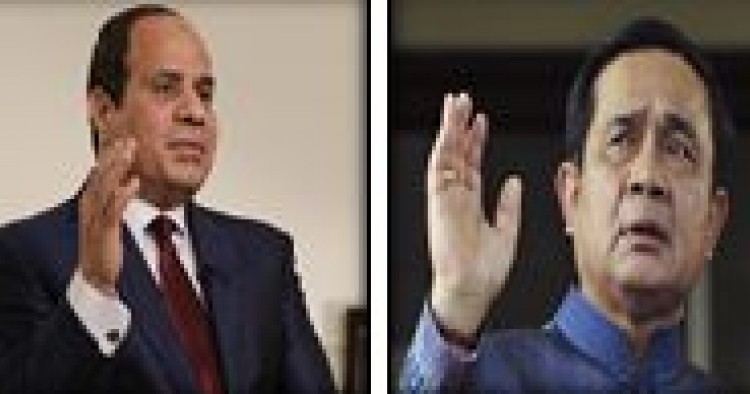 The military took advantage of political crisis to remove civilian governments in Egypt in 2013 and Thailand in 2014. These coups underscored three important features of the political systems in both countries. First, these systems could not provide a strong foundation to resolve conflict among elites, and between elites and grassroots. Second, even though societies in both countries generally have evolved economically and politically, elites in those countries refused to change their perspectives in dealing with political competition and political crisis. Third, since the old regimes were toppled, the society became more politically active in overseeing the role of government.

Among the elites that play critical roles in Egypt and Thailand, the military has emerged as the ‘winner’ among all other institutions in governing the two countries. Its status in this regard is due to its capability as a coercive apparatus in returning order either by supporting the old regime or by siding with mass protests.[1] Thus, the question arises as to why the military’s ruling ambition is so pervasive in Egypt and Thailand.

Three factors have combined to explain the persistence of the military ruling ambition (MRA) in Thailand and Egypt: a lack of external pressure, a fragmented civil society, and an absence of strong internal challenges against politically oriented officers.

The MRA is the desire and capacity that drives the military to engage in multiple spheres of society, particularly in the political sphere. The desire to play the dominant role or to highly influence policies—and even to overthrow sitting governments—can stem either from the armed forces as an institution or from individual officers.[2] Two facts illustrate the desire and capacity of the militaries in both countries to rule. First, both armies have seriously challenged the government by launching coups. Initially, the armies wanted only to return order and stability. However, once they had the opportunity, they consolidated their hold on the state. Second, the armies in both countries set up new constitutions,[3] which arrogated to the army self-management and ruled out civilian oversight of their budget and actions.

In Thailand, the military started to display its ambition to rule the country when it seized the government from the elected civilian prime minister in 1947, subsequently installing Field Marshall Plaek Phibunsongkhram as Premier—a position he had held a decade earlier. In Egypt, the MRA arose after the Free Officers, led by Gamal Abdel Nasser, overthrew the monarchy in 1952 and instituted their military-led rule. In both countries, the militaries institutionalized themselves as the self-described guardians of the state and nation. This perception emerged after the militaries succeeded in overthrowing the monarchies, and was amplified by their proclaimed role as agents of modernization.[4]

In both countries, a distinctive form of the MRA involving middle and high ranking officers has dominated the political arena. In Thailand since the early 2000s, the army has been politicized by three important figures, first was former General Prem Tinsulanonda, Chair of the Privy Council, a monarchy-affiliated group. Second among the important figures was Thaksin Shinawatra and his allies, who built their own support base within the military, depending on Class 21 which consisted mainly of a small portion of low-ranking officers.[5] The final important militaristic figure is the current leader of the junta, Prayuth Chan-ocha, who controls the most powerful faction in the Thai military, the Eastern Tigers, also known as the Queen’s Guard (ETQG).

However, once the officers took control of the government, the personal ruling ambition was transformed into the institutional interest of the military. In Thailand, shortly after toppling Thaksin’s regime in 2006, the army created the Council for National Security (CNS); in 2014, it created the National Council for Peace and Order (NCPO), led by General Prayuth Chan-ocha. In Egypt, the Supreme Council of the Armed Forces (SCAF) took over control of the country after President Mubarak was forced to resign—by popular protest as well as by the military top brass—in February of 2011. They handed over power to President Mohammad Morsy after his election in 2012.  But public protests and another military intervention—this time, when Morsy did not heed the warnings of the military top brass to resign, they staged a direct coup—led to the ouster of Morsy.  Authority was not returned to the SCAF, but to a civilian interim president and government, albeit directly backed by the military.  The defense minister who had led the military intervention against Morsy, Field Marshal Abdel-Fattah al-Sisi, resigned his military rank and ran for president in 2014. The interests of the military in Thailand are well represented by the NCPO; in Egypt, they were represented by the SCAF and now by the President who hails from the military institution.

In Thailand, the military and the monarchy have formed strong ties in order to maintain their dominant positions within society.[6] In Egypt, the military has been a powerful political actor ever since the Nasser regime.

External pressure, such as from the U.S. government, has done little to change the domestic direction of the military in either country. Shortly after the military sidelined the Morsi government, the White House imposed soft sanctions, such as a hold on $1.3 billion annual military aid.[7] In line with the case of Egypt, the U.S. government has levied limited sanctions against Thailand.[8] Initially, shortly after the coup in 2013, the United States placed restrictions on Egypt’s procurement of weapons. However, the United States lifted the hold in March 2015 and went ahead with transfer of weapons systems, including fighter jets, missiles, and military-grade mobile surveillance to the Egypt military.[9]

Likewise, immediately following the Thai military intervention in domestic politics in 2014, the U.S. government suspended $4.7 million in security assistance to Thailand.[10] Yet, the United States nonetheless has continued to participate in the annual Cobra Gold multinational military exercises hosted by Thailand.[11]

Both the Thai and Egyptian militaries have adopted nationalistic policies which stand against United States-led pressure. The military in both countries have no fear of being ignored by Western countries, since there are other major powers such as Russia and China—and in the case of Egypt, Saudi Arabia and other gulf countries--that appear ready to provide military and economic support. International sanctions have been seen as merely symbolic gestures by both militaries, in recognition of the fact that the United States can ill afford to overlook its national security interests in two crucial regions, the Middle East and Southeast Asia.

The extent to which the MRA remains in place also reflects the fragility of civil society groups to counter such intentions of the military. Accordingly, the solidarity of the groups could put some pressure on the regimes to negotiate crucial issues such as the role of civilians in governing and measures to reduce violence committed by officers. Initiatives to draft a constitution guaranteeing basic rights of citizens have similarly been pushed through by these groups. In Thailand, since the downfall of former Prime Ministers Thaksin Shinawatra in 2006 and his sister Yingluck Shinawatra in 2014, color-coded groups of their supporters and opponents have marked the Thai political dynamic. A prolonged political battle between the “yellow shirt” group and the “red shirt” group led to the absence of a controlling factor from civil society to constrain the military ambition to meddle in affairs of governance.[12] There are also other groups such as the New Democracy Movement (NDM), coordinated by students, as well as professional and business groups. However, these groups have been either the targets of a crackdown, as in the case of the NDM,[13] or co-opted, as in the case of professional groups. Similarly, the military in Egypt took advantage of divisions within the political sphere between the Muslim Brotherhood and an array of liberal, nationalist and leftist forces in order to stage its return into politics. Subsequently it declared the Muslim Brotherhood a terrorist organization and chased it underground, and it has turned against civil society and youth groups that challenge its power, sending hundreds of them to jail.

The unity of military leadership during periods of transition and consolidation highly determine the path of the MRA among officers to steer the country. One effective constraining factor in curbing the MRA is the internal challenge from some professional officers, which emphasizes the apolitical roles of the military, against those who seek active military roles in politics. As happened in South Korea and Indonesia, such officers who were trained overseas, returned home with some modern professional values not to intervene in daily politics. In sum, these professional officers initiated internal military reforms, such as abolishing political-related bodies and initiating a more transparent and accountable military budget. These acts, in turn curbed the MRA of some active high ranking officers who would otherwise seek political power or even seize office. In Thailand, the two competing military factions[14] have dominated the country during the last decade. Regardless of which group takes charge officers in both have been highly politicized to control the government.

In Egypt, the military has been effectively in office continuously since 1952.  President Mubarak’s suspected attempt to put his civilian son next in line for the presidency spurred the military into action in 2011.  And the Muslim Brotherhood’s perceived attempts in late 2012 to move against, and impose MB control over, the army spurred them into action in 2013. They are not likely to relinquish power anytime soon.

The absence of three constraining factors to tame the MRA as explained above underscore the extent to which the military can exert its powerful political influence across a country. Regardless of many differences between Thailand and Egypt, particularly the character and ideology of their regimes, this essay highlights their similar features and illuminates the motivation of their militaries to run the countries.

[2] Hipolitus Yolisandry Ringgi, “The Ruling Ambition of the Military in South Korea, Indonesia, and the Philippines during the Process of Democratic Consolidation,” Northwestern University EDGS Working Paper, 7 (2012).