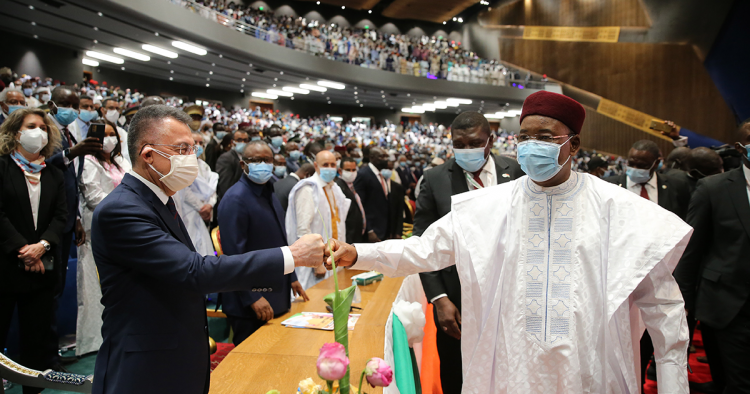 On April 2, Niger completed its first democratic transfer of power since obtaining its independence from France in 1960. Mohamed Bazoum, Niger’s minister of the interior from 2016 to 2020, was elected president due to his pledges to combat ISIS, tackle corruption, and promote gender equality. Although Bazoum withstood a coup attempt and a slew of terror attacks before taking office, Niger’s presidential transition compares favorably to the military’s recent seizures of power in Mali and Chad.

Due to its relatively stable political institutions, geographic proximity to Libya, and U.N. Security Council (UNSC) seat, regional powers in the Middle East are competing for influence in Niger. Egypt and the UAE are trying to counter Turkey’s growing economic and security cooperation with Niger, Saudi Arabia and Iran wish to leverage its UNSC voting power, and Israel is testing the waters for a potential normalization of diplomatic relations. These rivalries are poised to intensify, as the Sahel’s geostrategic significance continues to expand.

Turkey’s rivalry with Egypt and the UAE in Niger

Although Niger balances favorable relations with a diverse array of Middle Eastern regional powers, it has forged an especially strong partnership with Turkey. In January 2013, Turkish Prime Minister Recep Tayyip Erdoğan visited Niger as part of a three-country African tour that also included visits to Senegal and Gabon. During his trip, Erdoğan pledged to construct a 450-kilometer double-lane road from Niamey to Istanbulewa. Nigerien President Mahamadou Issoufou expressed his gratitude by praising Turkey as a “role model for the Islamic world” and as a representative of the “modernizing of Islam,” and awarding Erdoğan Niger’s order of state.

Erdoğan’s stopover in Niger facilitated Issoufou’s reciprocal March 2014 visit to Turkey and Nigerien Prime Minister Brigi Rafini’s January 2018 arrival in Ankara. While Turkey-Niger trade relations remained modest with total bilateral trade of $72 million in 2019, Ankara’s January 2020 military intervention on behalf of the Government of National Accord (GNA) in Libya prompted Turkey to strengthen its relationship with neighboring Niger. On Jan. 20, Turkey signed a mineral exploration deal with the country. During his July 2020 trip to Niger, Turkish Foreign Minister Mevlüt Çavuşoğlu signed a military agreement with President Issoufou. This agreement could help Turkey support a long-term military presence in Libya and counter a potential Egyptian military intervention in eastern Libya, which Cairo threatened in June 2020.

As Egypt and Turkey are competing for influence in the Sahel, Cairo has also taken steps to strengthen its partnership with Niger. In March, Gen. Abbas Kamel, the head of Egypt’s General Intelligence Directorate, visited Niger to pre-empt Turkey’s potential construction of a military base in the country. On April 21, Egyptian Foreign Minister Sameh Shoukry consulted with Bazoum about the Grand Ethiopian Renaissance Dam dispute, as Egypt sought to take the Nile Dam issue to the UNSC. Despite these consultations, the Egypt-Niger relationship lacks the economic depth to supersede the Turkey-Niger partnership.

The UAE is better equipped than Egypt to compete with Turkey for influence in Niger. Since 2014, the UAE has invested in Niger’s infrastructure as part of a $19 billion West African infrastructure modernization investment and helped the country to construct a thermal power plant. The UAE also supplied COVID-19-related medical assistance to Niger in May 2020, which helped 6,000 Nigerien public health personnel combat the virus. To show its solidarity with the UAE, Niger recalled its ambassador from Qatar in June 2017 over allegations that Doha sponsored Islamist militants and cooperated with Iran. In June 2019, the UAE reportedly asked Niger to establish a base that would support Libya National Army (LNA) chieftain Khalifa Hifter. While Hifter’s retreat from Tripoli last spring derailed this prospect, the UAE has the resources to outbid Turkey economically and exert meaningful leverage over Niger’s foreign policy.

Due to its UNSC seat, Niger has become a party to debates on sanctions against Iran. Niger’s involvement in these debates peaked in September 2020, as it chaired the UNSC meeting about U.S. attempts to impose snapback sanctions on Iran. Before the Sept. 10 UNSC vote, Iranian President Hassan Rouhani consulted with Issoufou on the Joint Comprehensive Plan of Action and appealed to Niger’s frustrations with U.S. unilateralism. This outreach also reflected the growth of Iran-Niger relations that followed President Mahmoud Ahmadinejad’s April 2013 Niamey trip. Ahmadinejad’s visit came one week after Iran’s announced that it would build two uranium mines, but Iranian media outlets rebutted Nigerien reports that uranium purchases were on the agenda. Iranian Foreign Minister Javad Zarif also met with senior Nigerien officials in October 2017 and May 2019 in an attempt to bolster bilateral trade.

To counter the growth of Niger-Iran relations, Saudi Arabia has expanded its investments in the Nigerien economy. Saudi Arabia’s investments in the Kandaji Dam project and construction of local primary schools are especially noteworthy contributions. There is also growing speculation that Niger could follow in Chad and Sudan’s footsteps by normalizing relations with Israel. After suspending relations with Israel during the 1973 war, Niger re-established diplomatic relations in 1996. However, in 2002, Niger became the first country to suspend diplomatic relations with Israel over its handling of the Second Intifada. Israeli Intelligence Minister Eli Cohen has urged Israel to re-establish diplomatic relations with Muslim countries in West Africa and regards a normalization with Niger, the largest predominantly Muslim country in the region, as an important step in this process. Niger’s role in communicating the Organization of Islamic Cooperation’s condemnations of Israeli conduct in the Gaza Strip to U.N. Secretary-General Antonio Guterres could slow this process, as Cohen’s statement factored in the softening of Niger’s pro-Palestinian position.

Although Niger ranks at the bottom of the Human Development Index and has been severely affected by the Sahel’s wave of terrorist attacks, Middle Eastern regional powers view the country as an increasingly important theater of geostrategic contestation. This trend will likely persist after Niger leaves the UNSC in December 2021, as securing influence in Niger could also further the ambitions of the Middle Eastern regional powers in Libya, Mali, and Chad.