The face of the Libyan Arab Spring, Mahmoud Jibril, felled by COVID-19 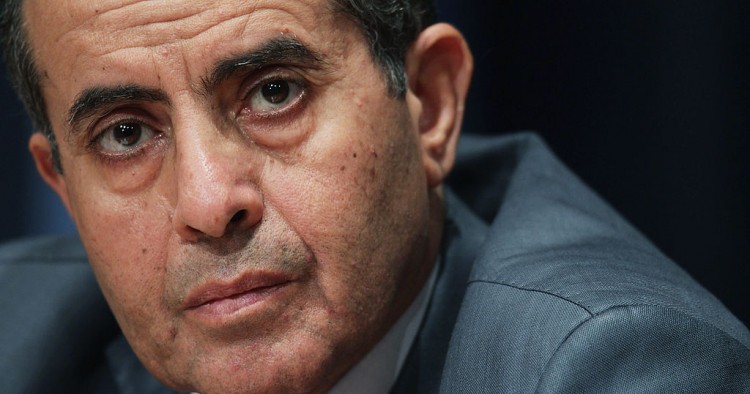 Pandemics don’t differentiate between pauper and prince. Yes, the world’s most vulnerable are generally the hardest hit, but so are a disproportionate number of its great statemen — likely due to their broad travels, wide social acquaintance, and advanced ages. A largely forgotten fact about the Versailles Conference is that the world’s three most powerful leaders (Woodrow Wilson, David Lloyd George, and George Clemenceau) all contracted Spanish flu during the talks. Many historians feel that their illnesses meaningfully affected the outcome of the negotiations.

Today, the COVID-19 pandemic is already changing the course of global politics and cutting down major world figures in their prime — with British Prime Minister Boris Johnson only just released from intensive care as we go to press. Last Sunday, the pandemic claimed the life of the most internationally prominent face of the Arab Spring in Libya. The tragic death of former Libyan Prime Minister Mahmoud Jibril in a Cairo hospital, at just 68 years of age, is in fact a fitting metaphor for the many stillborn aspects of Libya’s attempted political rebirth. Whether it was true or not, Jibril proclaimed that the 2011 Libyan Uprisings were meant to take the country from dictatorship to democracy. In reality, they have taken the country from Gadhafi to chaos, creating a multipolar civil war and humanitarian catastrophe, while largely bankrupting its once powerhouse economy.

We both feel that Jibril’s journey over the last 15 years elegantly mirrors the ups and downs of Libya’s political trajectory itself. We knew him personally. Back in the early years of this century, armed with his PhD from the University of Pittsburg and his obsession with international best business practices, he was seen as a wunderkind of planning and privatization. He was appointed head of the Economic Development Board — the body created by Western management consultants to ostensibly turn Libya into the Singapore of the Mediterranean. It failed to do for many reasons, but one of them was the old regime’s obsession with making sure to brand all reforms as results of the visionary leadership of Saif al-Islam Gadhafi — the Brother Leader’s second son and heir apparent.

Just as Jibril is inadvertently associated with the failure of the Gadhafian reform process, so too is he the posterchild of the post-Gadhafi descent into factional warfare among the victorious militias. No sooner was Libya’s last piece of territory liberated and Gadhafi killed in October 2011, then internecine fighting started pitting “Islamists” against “Anti-Islamists” and UAE-supported militias against those supported by Qatar and Turkey. Jibril was Libya’s first post-Gadhafi prime minister and it was during his tenure that the first shots of this first War of Post-Gadhafi Succession were fired. Unfortunately, he responded by appeasing all militias rather than attempting to cut them down to size.

And yet, even as he breathed his last breaths — and had largely vanished from the political scene into a self-imposed exile — certain Libyans still pinned their hopes that Jibril would somehow return to guide Libya out of its current quagmire, healing the divides between easterners and westerners. Jibril still enjoyed some of the popularity he had gained through his role as the driving force in securing Western recognition of the anti-Gadhafi rebels as Libya’s sovereign authorities. Libyans have not forgotten that it was his personal connections to Hillary Clinton, Bernard-Henri Lévy, and Nicolas Sarkozy that made all the difference in those crucial spring months in 2011. They also look back, maybe with somewhat rose-tinted spectacles, to Libya’s first post-Gadhafi parliamentary elections in July 2012, when Jibril’s National Forces Alliance (NFA) ran the tables.

Having taken place just nine months after Gadhafi’s death, the elections were instantly hailed as an extraordinary achievement and Jibril as their primary victor. Despite minor election day disruptions, the vast majority were able to cast their ballots, with international observers verifying the elections as free and fair. Indeed, Jibril’s NFA had received the vote of over 900,000 Libyans (in a country with less than three million registered voters) and had almost as many votes as all the other participating 130 parties combined. It took 39 of the 80 seats available to political parties in the 200-seat General National Congress (GNC), more than double the 17 seats won by its nearest rival, the Muslim Brotherhood’s Justice & Construction Party.

At the time, the result was considered as bucking the regional trend, as Muslim Brotherhood-backed parties had initially won elections in Egypt and Tunisia. In retrospect, and as many of us said at the time, these elections were held too early, without the construction of robust institutions. Hence, they facilitated polarization and a winner-take-all political climate.

The election result led to raised expectations as Libyans pinned their hopes on Jibril personally leading them out of Gadhafi-era repression into a kinder, freer, more generous Libya. Jibril was not ideological and decidedly not charismatic. He was a bespectacled technocrat and problem solver, at ease discussing macrofinance, procurement procedures, Western science, and global politics in either Arabic or English. Were he healthy, he would have been among the most capable Libyans to spearhead the technocratic aspect of the country’s coronavirus response. What an irony, then, that the disease claimed him as the first prominent Libyan to die.

He was a man with a high self-opinion who was eager to flatter Western leaders with grandiose and eloquent promises, but very quick to condescend to “ordinary” Libyans, as well as Western Libya experts. We both vividly recall a luncheon in the British House of Lords in late 2014 where Jibril was the guest of honor. The topic of discussion was how to do business in Libya in the wake of the recent fighting over Tripoli International Airport, which had caused the Western diplomatic community to flee the capital and had splintered the country into two rival political administrations.

As we ate, Jibril expostulated about the advantages of Sirte — inviting all the businessmen and British peers in attendance to join him in Sirte in the next year. He promised that mega construction contracts would be for those swashbucklers willing to make the trek to Libya’s central desert region and aid in its rebuilding. When asked about the threat of jihadis by a British businessperson, he brushed it off, saying the jihadis were only in Derna, Tripoli, and Benghazi, and furthermore that Sirte was a central location, neutral in the feud between east and west. Within a few months of Jibril’s nonchalant promise, Sirte would witness the beheadings of 21 Christian guest workers in orange jumpsuits; within a year it would become ISIS’s main territorial acquisition outside of the Levant.

Jibril also made major political miscalculations due to his unique form of hubris. His failure to grasp the implications of the transferable vote proportional representation system, which was chosen for Libya’s first democratic elections, was arguably the most significant failing of his political life. While Jibril and his NFA were lauded for winning 39 out of the 80 political party seats in Libya’s first post-Gadhafi election, they were criticized for focusing their electioneering on the political party candidates at the expense of the independent individual candidates. They put their eggs all in one basket, going for broke to win a majority of political party seats and not working to convince the 120 independent candidates to work with their movement. This signal failure ultimately cost Jibril the prime-ministership and his party control over Libya’s future.

It could be argued that the Muslim Brotherhood had grasped the technical implications of the electoral system far earlier. They had long cultivated the “so-called independents.” As such, they managed to turn around a humiliating loss in the elections to become the GNC’s kingmakers. Prime ministerial candidates had to deal with them as they were able to muster a much greater number of “independent” GNC members. Jibril and the NFA had failed miserably at horse-trading to persuade these independents. They had fallen just two votes short of making Jibril prime minister for a second term. Many argue that, from that point onwards, it was a downhill trajectory for Jibril, the NFA, and Libya.

This lack of control by a unifying leader or political movement, led to the subsequent dire performance of the GNC as a governing body. As the GNC and country fragmented, polarized, and then fell prey to rounds of civil war, even Jibril’s erstwhile supporters apportioned to him much of the blame. Somehow, he had snatched defeat out of the jaws of a potential resounding victory.

Ultimately, events on the ground in the nascent Libya simply moved too fast for Jibril’s technocratic step-by-step approach and long-term planning mentality. Claiming to “protect the revolution,” his opponents used force of arms to intimidate the GNC into passing the Political Isolation Law — a lustration law which excluded all holders of government positions in the former Gadhafi regime from leading roles in post-Gadhafi Libya.

With reformist technocrats including Jibril now sidelined, the GNC failed to control Libya’s emboldened and appeased militias, including their growing jihadist and Salafist strains. The specter of militias surrounding or storming the GNC to block legislation or appointments they opposed became a common occurrence. The militarization of Libya’s politics meant that Jibril and the NFA needed to be adopted by armed factions that opposed the Political Isolation Law. As such, they became increasingly associated with the Zintani militias.

Rather than healing divides, Jibril polarized them with his anti-Muslim Brotherhood rhetoric. After he lost power, Salafists destroyed Sufi shrines and bombs started to go off across the country. In Benghazi, political assassinations and the ensuing reprisals spiraled out of control, leading to the assassination of our friend U.S. Ambassador Chris Stevens on Sept. 11, 2012. The very Western powers that had helped Jibril ascend to power, now cut and ran. The new Libya, which they had helped to create, had become too dangerous for their envoys who sought to nurture its civil society.

End of an era

Jibril’s passing closes a particular chapter in Libya’s post-Gadhafi history. Libya is still looking for leadership to unite its myriad competing political factions. Yet, the coronavirus pandemic is likely to sow further divisions and facilitate an uptick in the country’s civil war, while the Western world’s attention is turned inwards on fighting the virus. Like so many countries today, Libya is in need of a unifier and not a divider. Study of Jibril’s checkered legacy should serve as a cautionary tale for all those whose hubris allows them to imagine governing without compromising.

Jason Pack is a Non-Resident Fellow at the Middle East Institute and the Founder of Libya-Analysis LLC. Sami Zaptia is the Editor-in-Chief of the Libya Herald. The views expressed in this article are their own.