The Ferghana Valley Railway Should Never Be Built 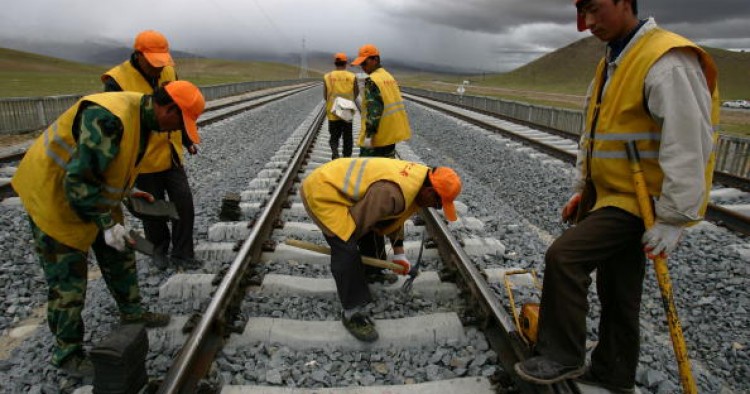 A planned Kashgar to Osh railway is part of China’s Eurasian Intercontinental CR Express rail freight policy. It would require a huge amount of new construction, massive public debt for Kyrgyzstan and would provide no clear economic benefit. The proposed line would also actually be longer than the existing route from Urumqi to Tashkent via Kazakhstan.

Dreams of a China–Kyrgyzstan–Uzbekistan railway project have been around since the independence of the Central Asian states, whose transport networks still invariably face Moscow rather than serve any national interest. As such, a Kashgar–Osh–Ferghana railway connection does have a lot of potential for regional economic integration. It would serve mostly as an important eastward gateway for Uzbekistan’s Ferghana valley, as currently the only railway connection from the capital Tashkent to the region is a dead end in Osh.

Ferghana was the landing point for Saudi Wahhabism in the 1990s and for its transmission into Afghanistan and Pakistan.[1] It is one of the most populated areas of Central Asia, pocketed with enclaves and exclaves of Kyrgyzstan, Tajikistan and Uzbekistan — an ethnically diverse region with great potential for economic development, against the backdrop of the continued risk of inter-ethnic violence.

The Ferghana Valley is also the historical fertility grounds of China’s Silk Road interaction with Central Asia. The valley was home to the stock of ‘heavenly horses’ that formed the Han dynasty cavalry and which became the genetic base for the horse’s more widespread use in China.[2]

China now hopes to construct a new economic transport link here in Ferghana — a rail freight line. On the Central Asia side, the Ferghana line currently terminates in the Kyrgyz city of Osh. China plans to connect this line by constructing new track from Osh to Kashgar in southern Xinjiang province.

The proposed rail link from Kashgar, across Kyrgyzstan, and into the Ferghana looks great on maps and in policy proposals, but lacks basic economic fundamentals. The 600 km rail line would be built through essentially unpopulated lands in Kyrgyzstan and China. Therefore, the local economic improvement potential for Kyrgyzstan is virtually non-existent.

Uzbekistan stands to benefit more from China opening market access via the line and has supported China’s plan from the outset. Whereas Kyrgyzstan’s position has been in limbo — the railway being a good proxy for the current domestic political impasse.[3] Kyrgyzstan in principle supports the project, but government knows that it cannot fund any part it.

The original 2012 cross-Kyrgyzstan plan was to build almost 50 tunnels and close to 100 bridges, with a total length of 50 km. The line would traverse mountainous terrain, some sections over 3,000 meters above sea-level, with new construction of approximately 280km of track in Kyrgyzstan and 180 km in China.

In 2012 costs were projected to be between $2.5-3 billion.[4] Given the realities of China’s construction projects, from Kenya to Montenegro, the real cost, if construction were to begin today, would certainly be much higher.

Kyrgyzstan’s total government debt is currently $4.7 billion, of which $1.8 billion is owed to China. If the debt-burden were carried by Kyrgyzstan then the project would push the debt ratio of the country to 86-92% of GDP on the 2012 cost estimates, and easily over 100% with more realistic current costs.

Kyrgyzstan is already one of the most vulnerable states in the region to foreign debt risks. The country has the highest ratio of government debt to GDP in the region. China’s Exim Bank currently holds 39% of the Kyrgyz Republic’s total foreign debt. And according to the Kiel Institute for the World Economy study involving sovereign risk guru Carmen Reinhardt, Kyrgyzstan is the fifth most indebted nation in the world to China measured against GDP, after Djibouti, Tonga, the Maldives and the Democratic Republic of Congo.[5]

Uzbekistan has a much lower and more manageable government debt stock, a larger population and thus wider consumer base, and more diversified industry than Kyrgyzstan. But China’s share of Uzbekistan’s foreign debt is also already around 40%. It is difficult to avoid the meme of debt-trap diplomacy.[6]

Figure 1. Regional public debt as a percentage of GDP and China’s share of debt.

Realities of railway construction and capacity

While the railway line connecting Uzbekistan through Kyrgyzstan via the Torugart Pass to China has been planned since 2012, the actual route of the line has never been finalized.

In fact, compared with the existing, more direct route from Tashkent to the China rail junction in Turpan via Khorgos in Kazakhstan, a new connection between Tashkent and Turpan via Kashgar would be around 50 kms longer.

Figure 2. The new railway is actually farther from the transport and logistics hub of Turpan, near Urumqi.

This 50 km is not particularly significant over a distance of around 2,000 kilometers. But there are also other limiting factors to the proposed Tashkent-Kashgar-Turpan line.

The Kashgar-Turpan line within China is a high-altitude railway that is only single-tracked and non-electrified (diesel only) on the China side, which significantly limits its capacities. The new rail line planned from the China border to Osh would also be single-tracked and diesel.

Therefore even if the line were built, its transport capacity potential would be much lower than the existing rail infrastructure connecting Uzbekistan to China via Kazakhstan on the northern route.

The new Ferghana to Kashgar line could possibly be justified if traffic volumes were high via the Kazakhstan crossings at Khorgos or Dostyk. But the Khorgos dry port — the overrated flagship BRI project — is highly underutilized.[7] According to our research, only 7 to 10 freight trains use the route daily in either direction. If additional capacity were needed, electrification of the Altynko-Almaty section in Kazakhstan would be a much cheaper and faster alternative than building a new line from Kashgar to Osh.

The gauge of the railway is also problematic: China wants to convince Kyrgyzstan to build it in standard gauge (1435 mm), while Kyrgyzstan and Uzbekistan’s national standard is broad gauge (1520 mm).

Why does China want this railway?

Central Asia and Caucasus states are linchpin economic allies for China’s Belt and Road Initiative (BRI). These ‘near abroad’ economies are the closest markets to China’s developing Western provinces, and are already reasonably well connected by road and rail to China. The proposed new railway would allow further deepening of China’s trade relationships with both Kyrgyzstan and Uzbekistan.

For the regional economies, the past decade saw substantial growth in trade with China. While the European Union (EU) is still the region’s largest aggregate trading partner, China overtook Russia in the aggregate, and also for many individual economies, China is now a major trading partner. For Kyrgyzstan and Uzbekistan, 52% and 23% of trade, respectively, is settled with China.

However, these economies individually are tiny markets for China. For example in 2018 China asked to import 400,000 tons of honey from Kyrgyzstan. The only problem was that Kyrgyzstan could only produce around 10,000 tons for export annually.[8]

China’s foreign policy goals in Belt and Road economies are not simply about building infrastructure or opening new markets. China’s Central Asian and Caucasus policy is inherently political. China’s goals with the Kyrgyz Republic-Uzbekistan rail link are also not limited to regional trade. Naturally it is a node in a wider geopolitical and geoeconomic policy agenda.

The West rail connections running through Central Asia mainly serve traffic destined to terminate within the region or to transit through to Europe, Turkey and to a lesser extent, Iran. The West 1 line exits from Xinjiang Alashankou (Dostyk)/Khorgos border stations, connecting to the Kazakhstan and Russia rail networks, passing through Belarus and entering the European Union in Poland.

The West 2 line exits Xinjiang, also at either of the Alashankou/Khorgos border stations, runs through Kazakhstan, Turkmenistan, Iran, Turkey and enters the EU in Bulgaria. These are already functioning lines, with over 90% of the China-Europe cargo volumes delivered through the West 1 line.

The West 3 line is the only line which is a planned new build. It would connect Kashgar to Osh through the Torugart pass between Kyrgyzstan and Uzbekistan, leading to Uzbekistan’s Ferghana Valley. China’s 2016 China-Europe intercontinental rail freight plan then has it passing through Uzbekistan, Turkmenistan and Iran, where it would join up with the West 2 line.

This West 3 line into the Ferghana Valley opens no new markets, and connects China to nowhere in Eurasia that is not already connected by other infrastructure. It is therefore purely a geopolitical infrastructure build, with zero immediate economic benefit for China.

Xinjiang also plays a very different policy role for China in the Belt and Road era than it had before. Northern Xinjiang has been effectively populated by Han Chinese, and integrated into the national economic development strategy. Southern Xinjiang, though, remains economically orphaned from coastal China, with a low population density, and a geographic isolation behind mountains and desert. Developing new transport and trade routes from South and Central Asia could become backbone infrastructure for the economic development of Southern Xinjiang, centered on Kashgar.

In geoeconomic development terms, southern Xinjiang is currently a transport dead-end. There are no modern, high-capacity road or rail connections to neighbouring countries. The even less likely railway line to Pakistan is also planned to terminate here.

Therefore, a new connection in to Central Asia would also strengthen China’s strategic hedging against both Kazakhstan and Russia.[11] The Kazakh West 1 and West 2 rail links, and the developing Middle Corridor Caspian Sea route all strategically cut out Russia from China’s geoeconomic transport calculus.[12] However there are currently no intercontinental land routes that isolate both Russia and Kazakhstan from China’s geopolitical risk.

The construction of the new line through Kyrgyzstan and Uzbekistan would also strengthen two developing ‘principal-agent’ relationships for China in the region. Kazakhstan, despite its multi-vector foreign policy, remains heavily a Russian Federation security stalwart.[13] Any Russia-Kazakhstan trade or security bloc would naturally undermine China’s longer term geoeconomic ambitions in the region.

Kyrgyzstan and Uzbekistan though, with greater trade dependence and greater sovereign debt owed directly to China, would become more easily co-opted into any future China geoeconomic policies in the region. This Kashgar to Tehran via Tashkent corridor then becomes much more than simply a transport link. The ability to then shift geotransport policy between the two corridors strengthens China’s regional position, strengthens the Iran-China corridor, and would safeguard the availability of multiple alternative routes.

Railway viable only if China pays

Kazakhstan Railways transported 283 million tons of freight in 2018, with the railways of Uzbekistan and Kyrgyzstan transporting only 95 and 7 million tons, respectively. China’s western rail freight links to Central Asian economies do have the potential to be hugely transformative and economically positive.

However, overall, the proposed railway line would primarily benefit China’s domestic Xinjiang economy, as well as China’s wider regional geopolitical and geoeconomic ambitions. But under the current model the financial costs, and financial risk, of a Kashgar to Osh railway, would fall mainly on Kyrgyzstan and Uzbekistan — whose economies would barely benefit from the line’s construction. For either country, there is no realistic reason to support China’s idea.

The distance, cost, capacity, and potential economic use of an Osh to Kashgar freight railway makes zero economic sense. And under the current model, the construction of the railway link would push a huge China policy bank debt burden on to Kyrgyzstan’s public finance architecture. As such, the railway cannot serve any economic goal, it can only serve a geopolitical one.

For Uzbekistan, its land-locked markets would be better serviced by the shorter and cheaper Kazakhstan route to China. For the Kyrgyz people, they should not have to shoulder the financial burden of China's political goals. If the only motivation is geopolitics, then China should pay for the Ferghana rail line to Kashgar.