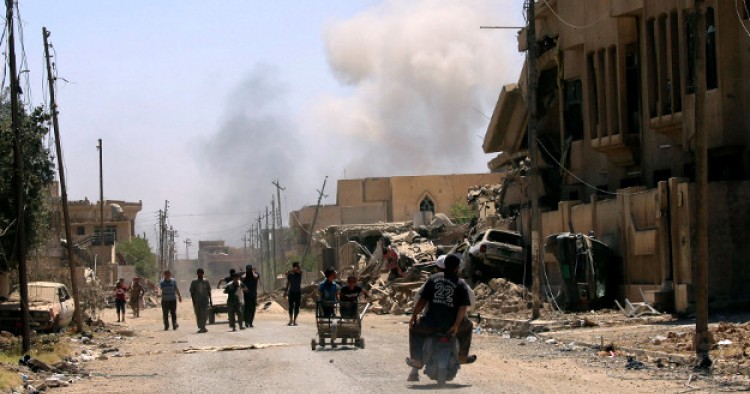 In this week's Briefing, MEI experts Charles Lister, Gonul Tol, and Gerald Feierstein provide analysis on recent and upcoming events including the beginning of the final phase of the battle to retake Mosul, Germany's consideration for withdrawing troops from Turkey, and Qatar's fragile relations within the G.C.C.

The final phase of the battle for Mosul is now underway, with five square miles of territory—encompassing the Old City and three adjoining districts—still under ISIS control. At least 150,000 civilians remain in this especially dense urban environment in which tanks, armored vehicles and even the most targeted airstrikes all hold less value than they’ve held until now. Iraqi military officials have confidently claimed that Mosul will be liberated by June 10 (the third anniversary of the city’s loss), but this is overly optimistic. The nature of the remaining terrain does not lend itself to such rapid advances. In fact, the Iraqi army remains 2km from the Old City, which is likely to prove the biggest challenge yet.

Retaking Mosul has proven an unrelenting challenge. In what has been Iraq’s largest military operation since the U.S. invasion in 2003, eight months of intensive operations have resulted in at least 1,000 Iraqi military fatalities and over 6,000 wounded. The sensitive issue of ‘collateral damage’ has soared in recent weeks, with reports that over 8,000 civilians have been killed or injured. One U.S. airstrike alone killed over 100 in March 2017. Such issues do little to weaken the narratives that gave way to ISIS’ advances in 2014; nor does Defense Secretary James Mattis’s recent claim to have embraced “annihilation tactics.”

The eventual liberation of Mosul will deal a great blow to ISIS in Iraq, but the jihadi group remains a potent terrorist force, as recent bombings in Baghdad underlined. The group is already attempting a comeback in several areas of Iraq, and Syria’s persistent instability will continue to provide openings for a group that feeds off of chaos and suffering. We may be winning against ISIS, but we’re not seeing its final days.

Turkish cooperation across a range of issues—from battling the Islamic State to holding back migrants from European shores—is seen as so important to the West that despite the constant tension, Western leaders appear willing to tolerate Turkey. This mood was at display at last week’s meeting between E.U. officials and Turkish President Recep Tayyip Erdogan. After months of strain in Turkey-E.U. ties, officials in Brussels said talks between the heads of E.U. institutions and Erdogan were held in a "good atmosphere."

But one E.U. member seems to be at the end of its rope. Germany, whose relations with Turkey have been strained by a series of rows, will decide within two weeks whether to withdraw its roughly 250 troops deployed at Turkey's Incirlik air force base to help in the fight against Islamic State militants. Germany is considering moving its soldiers from Incirlik to Jordan or another country in the region because the Turkish government refuses to grant German lawmakers access to the site. Despite harsh statements from both sides, neither party is likely to take a dramatic step.

Despite the mounting pressure on German Chancellor Angela Merkel by her coalition partners to withdraw from the base, Merkel wants to keep Erdogan onboard the deal regarding Syrian refugees, and is against a hasty decision on Incirlik. She prefers to wait for the outcome of the talks between the two sides. Erdogan does not want Germany to withdraw troops either. Incirlik remains one of the few leverages Erdogan has over the West, and if Germany decides to move the troops elsewhere, it might set a precedent for others, costing an important bargaining chip for Erdogan.

Comments attributed to Qatar’s emir, Sheikh Tamim bin Hamad, have revived simmering tensions with its Gulf partners, especially Saudi Arabia and the U.A.E. Tamim reportedly spoke at a ceremony for Qatari armed forces graduates praising Iran, speaking of warm relations with Israel, and castigating the Gulf states, including over their arms purchases. The Qataris initially denied that the emir had made the comments, and then insisted that they came from a hacked website belonging to the Qatar News Agency and did not reflect the views of Tamim or the Qatari government.

In private remarks, a senior Qatari official likened the episode to a famous “hot mike” incident when then-President Ronald Reagan remarked jokingly about a planned attack on the Soviet Union. The official noted that the Russians quickly accepted Reagan’s explanation that the comments were made in jest, and never pressed the issue. He expressed dismay that the Saudis and Emiratis had refused to accept the Qatari explanation, retaliating, instead, by blocking Qatari print and broadcast media access.

This latest contretemps places new strains on Qatar’s relations with its G.C.C. partners only days after their show of solidarity during President Donald Trump’s visit. It also reinforces that Qatar’s overall relations within the G.C.C. remain fragile, despite Tamim’s efforts to repair the damage from earlier clashes over Qatar’s relations with the Muslim Brotherhood, and support for the Morsi government in Egypt. In the earlier instance, the differences led to a break in diplomatic relations lasting several months.