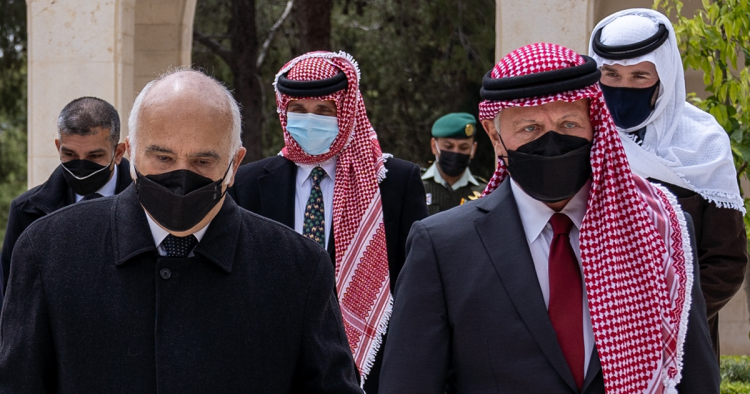 April 11, 2021 was to be a day of celebration and national pride marking the kingdom of Jordan’s centenary as a state — a geopolitical feat in itself few thought was possible a century ago. But instead of pomp and ceremony the festivities were overshadowed by stark events that took place a week before when the government unveiled a “plot” to destabilize the country involving a senior member of the royal family, a close former palace aide, and “outside entities.” This was an unprecedented development in the history of the kingdom and ruling monarchy. The implication of Prince Hamzah, the former crown prince and half-brother of King Abdullah, in a fuzzy conspiracy that is tantamount to a coup has shocked Jordanians from all walks of life.

Former Crown Prince Hamzah, the eldest son of the late King Hussein and his American-born wife Queen Noor, has denied the allegations against him in leaked videos and voice messages. His confrontation on April 10 with the chief of the army, who had visited him at home and asked him to limit his public activities to meeting close family members only, had gone viral when an audio recording was released on social media, apparently by Hamzah.

It took few days before King Abdullah addressed a deeply divided nation in a written statement announcing that the “sedition was nipped in the bud” and that the issue of Prince Hamzah will be resolved within the Hashemite family after the prince had pledged fealty to the king and his son, Crown Prince Hussein. Hamzah had been heir to the throne — in line with his father’s dying wishes — between 1999 and 2004 before he was relieved by King Abdullah.

But the crisis was not over. While the local media was slapped with a gag order, foreign news outlets spoke of a deep rift within the royal family and a wider conspiracy involving the prince and a former close aide to King Abdullah, Bassem Awadallah, who was now an adviser to Saudi Arabia’s Crown Prince Mohammed bin Salman. The government was silent, but rumors and uncorroborated reports filled social media platforms. On Twitter Jordanians launched hashtags praising Prince Hamzah and denouncing attempts to silence him. This has become a national crisis and the biggest challenge to date to the 59-year-old King Abdullah, who has ruled the country, unopposed, since 1999.

It will take weeks and months before Jordanians are given the facts, and even then many questions will remain unanswered. The government alleged that a complicit Hamzah wanted to offer himself as an alternative to the king. Many Jordanians don’t buy into the sketchy official version of events, but the crisis has turned attention to the dire state of the kingdom as it marked 100 years of existence. Prince Hamzah had talked about years of rampant corruption, public mismanagement, and harassment of vocal critics. His words resonated with a majority of Jordanians, especially a disgruntled youth.

A dire state of affairs

A year of fighting the coronavirus pandemic had taken its toll on an already struggling economy. Repeated lockdowns had hurt private businesses and exacerbated social conditions. The official unemployment rate had shot to 23%, reaching almost 50% among youth. The GDP per capita had actually shrunk over the past decade to about $3,000 by 2020. The government was accused of mismanaging its response to the pandemic as Jordan, a country of 10 million, registered the highest infection and mortality rates in the eastern Mediterranean region in recent weeks.

Moreover, the government had imposed a Defense Law in March 2020, which gave it broad executive powers to amend and suspend laws without oversight. Under this emergency law the government issued a series of orders, some of which are now being blamed for hurting the private sector and worsening the living conditions of millions of Jordanians. But perhaps more importantly, the government used the Defense Law to silence critics and the opposition through its security apparatus.

Most notably, the gap between the regime and its subjects had widened to dangerous levels. Since the Arab Spring protests, which Jordan handled carefully and peacefully, much promised political reforms had wavered. Two legislative elections were held under variants of the controversial single vote system, which weakened political parties, deepened intra-tribal competition, and produced rubber-stamp legislatures. Voter turnout in urban areas dipped to unprecedented levels, reflecting growing apathy.

The failure by successive governments, appointed by the king, to carry out much needed economic reforms — with the objective of ending the existing rentier system — had overburdened the national treasury and led to a whopping $45 billion in foreign and national debts. The failing socio-economic conditions had driven military retirees and young Jordanians, the majority of East Bank stock, to become openly critical of the system. Hamzah was accused of saying nothing when tribal heads he often visited crossed the red lines in their criticism of the regime.

Over the past years the regime had chosen to tighten its grip over political life in Jordan through pure security measures and options. The traditional opposition, led by the Islamists, had been meticulously dismantled with the aid of the judiciary. That left a loose coalition of young Jordanians, mainly from the tribes, to form what is now called the Hirak, or movement. In this latest crisis, the Hirakis, who a month earlier had failed to stage nation-wide protests to mark a decade since the Arab Spring, regrouped and waged cyber protests on Twitter demanding an end to corruption and genuine political reforms using Prince Hamzah as a symbolic figure.

Following the Arab Spring and between 2012 and 2017, King Abdullah published seven Royal Discussion Papers presenting his vision on the civil state, parliamentary government, rule of law, democratic empowerment, and sustainable democracy. These papers were received with enthusiasm by the country’s pundits when they were released. But in reality and on the ground the country was heading in a different direction altogether. The king was seen as relying on complacent aides and officials who resisted change. While more Jordanians demanded reforms, these aides resorted to the often used cliché that the time was not ripe.

A few weeks ago Freedom House changed Jordan’s status from “partially free” to “not free,” citing that “the parliament’s lower house is elected, but the electoral system continues to put the opposition at a disadvantage despite recent reforms, and the chamber wields little power in practice. The media and civil society groups are hampered by restrictive laws and government pressure. The judicial system is not independent and often fails to ensure due process.”

Could this be a turning point?

Now a growing number of Jordanians believe that this latest crisis presents a watershed and that the king must adopt a new trajectory in line with his previously declared vision. They believe he should turn this crisis into an opportunity to carry out much needed structural reforms. The coronavirus pandemic has exposed the corrosive condition that has hit the infrastructure of the modern Jordanian state, including health, education, media, civil society, political parties, and institutional bodies. In the view of pundits here the current situation is unsustainable and that for Jordan to survive the daunting geopolitical and domestic challenges it must change course through the adoption of a new deal between the monarchy and its subjects.

When the late King Hussein faced an uprising in 1989 in the wake of the collapse of the national currency and lifting of subsidies on bread, he chose to respond by restoring democratic life after more than 20 years of suspension. The protests were contained and fresh and free elections were held, putting the kingdom on a slow and often rigorous transition toward democracy. Thirty years on that transition appears to have stopped dead in its tracks. Young Jordanians, who make up the majority of the population, are pushing for more freedoms and new terms between the ruling monarchy and its citizens. The pressing question now is will King Abdullah take the initiative and use the latest crisis to put his country on a genuine democratic path?