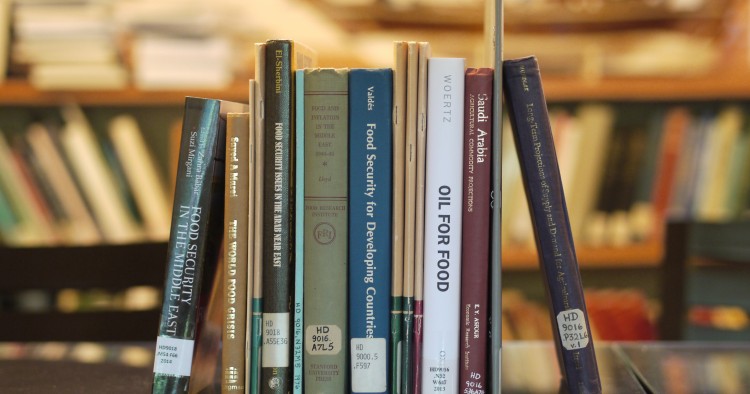 “[Food insecurity has] the potential to amplify destabilization, engender violence, and even accelerate state failure processes in an already geopolitically charged region”

– Andy Spiess in Food Security in the GCC Economies (2012)

In Food Problems and Prospects in the Middle East (1984), Alan Richards demonstrates the imbalance of supply and demand for food in the region such that the demand will continue to exceed the supply due to population growth, growth of incomes, and the income elasticity of the demand for food. He also addresses the supply response as well as its constraints. In Evolving Food Gaps in the Middle East/North Africa: Prospects and Policy Implications (1984), Nabil Khaldi also examines the widening gap between food supply and demand in the region as well as analyzes different trends and prospects of the region’s food security as well as the strategies needed to narrow the gap.

Lastly, in Food Security for Developing Countries (1981), Ahmed A. Goueli writes a chapter on the food security program in Egypt. Although the book is not specifically focused on the Middle East, it provides interesting comparisons in terms of how countries across the world have dealt with food insecurity from which important lessons can be drawn. For scholars who are interested in a particular country, there are also a number of country-specific books about food security at the Oman Library as follows:

Having once had one of the most extensive systems of food subsidies among developing countries, Egypt provides an interesting case study. In Government Policy and Food Imports: The Case of Wheat in Egypt (1981), Grant M. Scobie provides background into the Egyptian wheat policy and the developments in the Egyptian wheat sector under it. In Egypt’s Food Subsidy and Rationing System: A Description (1982), the authors give a comprehensive overview of the food subsidy and rationing system in Egypt, looking at its scope, structure, decision-making, and effects. Finally, in Food Subsidies in Egypt: Their Impact on Foreign Exchange and Trade (1983), Grant M. Scobie analyzes the monetary and real consequences of food subsidies in Egypt, arguing that the country’s food subsidies not only affected the inflation rate, the balance of payments and the exchange rate, but also destabilized industrial output and investment.

The Gulf region is quite interesting when it comes to the topic of food security. Although the region is well-endowed with oil and gas from which it derives its wealth, the Gulf is far from immune from the problem of food insecurity. Eckart Woertz examines the history, political economy, and geopolitics of food security in the Gulf region and looks at the more recent trends of international agro-investments in Oil for Food: The Global Food Crisis and the Middle East (2013)

Another country of interest is Saudi Arabia. The country has only 1.7 percent arable land, but it was at one point growing so much wheat that it became the sixth largest wheat exporter in the world as part of its attempt to achieve food security. The Saudi wheat production policy was, however, generally seen as a failure because it unnecessarily cost the country billions of dollars and only diminished the already little supply of water there is in the country. In Saudi Arabia: Long-Term Projections of Supply of and Demand for Agricultural Products (1965), Edmond Y. Asfour examines the demand for and the domestic supply of agricultural commodities as well as the imports demand for them, providing interesting figures and statistics.

Although more than half of the country is desert, Israel’s agricultural industry has been highly developed thanks to the country’s superb agricultural technologies. Thus, Israel provides another interesting case study for those interested in food security in the Middle East. In Long-Term Projects of Supply and Demand for Agricultural Products in Israel (1964), the authors look at major trends in agriculture, projections of supply and demand for 1965 and 1975, and projections of population and income for the same years in Israel.

Food security, according to the definition adopted by the United Nations Food and Agricultural Organization (UNFAO) “exists when all people, at all times, have physical and economic access to sufficient, safe and nutritious food that meets their dietary needs and food preferences for an active and healthy life.” In the Middle East, the problem of food insecurity is very real and will have more urgency in the future when the demand for food continues to grow while supply dwindles. To tackle the issue, collective action within the international community together with local actors, civil societies, local communities, and individuals is imperative. Indeed, scholars can be of great assistance in this regard as they can help to raise awareness about the issue as well as to propose solutions to the problems with their writings and research.