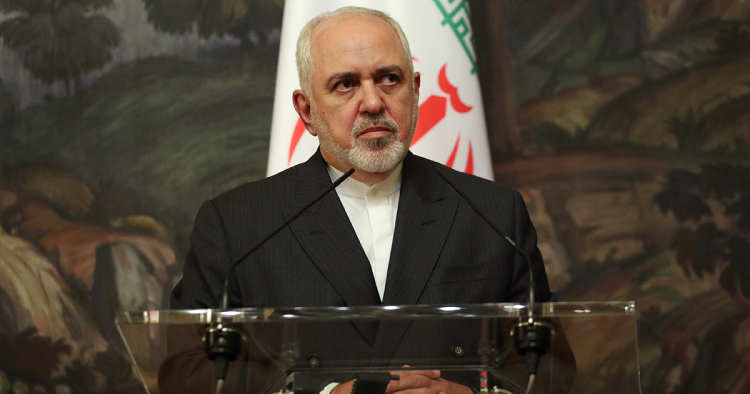 A leaked recording of Iranian Foreign Minister Mohammad Javad Zarif criticizing the role and influence of the regime’s ideological army, the Islamic Revolutionary Guard Corps (IRGC), and its late leader, Gen. Qassem Soleimani, has been making the rounds in international and Iranian media. For Zarif, the Islamic Republic’s shrewdest political mind, who once said he “ensures the details of private meetings are not disclosed,” the recording,  of a three-hour interview in March with the journalist Saeed Leylaz, was extremely frank and generous in detail. The timing of the leak also appears to be key.

The recording was released just days before the next round of nuclear talks in Vienna was set to begin — probably one of the last opportunities to get sanctions lifted prior to Iran’s June presidential elections — and two to three weeks before the May 11 deadline for candidates to register. Given the all-too-perfect timing and the clerical regime’s 42-year track record of lying and cover-ups, of which the denial over shooting down the Ukrainian airline last January was perhaps the best example, it is hardly surprising that the Iranian people are not buying into this story. The “leak” could very well be aimed at “pre-heating the election oven” (garm kardan-e tanoor-e entekhabaat, in Farsi) and a last-ditch attempt to pressure the U.S. into lifting sanctions before the presidential election, on the premise that it would strengthen the hand of Zarif and the “reformists.”

The criticism of Soleimani and the IRGC has certainly worked up the regime’s ideologically hardline hezbollahi support base and invigorated the so-called “reformist” elite inside the Islamic Republic. At the same time, progress in the nuclear talks in Vienna and the issue of lifting sanctions before Iran’s elections seem to be more on the agenda than ever before.

Against this backdrop, there is a strong possibility that the “leak” was in fact carefully coordinated, quite possibly by Zarif himself, albeit with the green-light from Supreme Leader Ayatollah Ali Khamenei. But moving forward what does the future hold for Zarif? Would he really stand a chance at qualifying as a candidate for the election after all this noise? Is Khamenei really prepared to put aside the well-polished, English-speaking diplomat, who has been able to defend the Islamic Republic’s ugliest policies with a smile and degree of charm so as to preserve the regime’s image abroad? The short answer is no. Moving forward there appear to be two likely scenarios for Zarif, both of which lead to the same carefully constructed end — and the West should be wary.

The first scenario is contingent on whether the U.S. lifts sanctions before Iran’s June elections. If this happens, we will likely see Zarif mount an unsuccessful bid for the presidency — his candidacy will either be rejected by the Guardian Council or he will lose the “vote.” Why is this the case? The answer is simple: Khamenei has to ensure the next president is a hardline hezbollahi to keep his basij support base and the regime’s security forces satisfied. This is all the more important for two key reasons. The first is that it is highly likely that the Islamic Republic will be faced with post-pandemic nationwide unrest in the coming years — something even regime insiders concede. Given that the basij and the hezbollahi camp are the regime’s foot soldiers and key to suppressing protests, the supreme leader needs to keep them happy. In addition, the 82-year-old ayatollah is laying the foundations for the future of the Islamic Republic after his eventual passing with the goal of ensuring the continuation of his hardline Islamist vision, something outlined in the supreme leader’s “Second Phase of the Islamic Revolution” (gaam-e dovom-e enghlab) manifesto. To achieve this, Khamenei has been awarding key government positions to his closest clerical proteges and members of the IRGC. Once a “young and hezbollahi” president takes office after the regime’s rubber-stamp election, expect to see accusations of “espionage” levelled against Zarif and lots of noise calling for his punishment — something we’re already been hearing from this camp. This is where scenario one morphs into scenario two with the goal of manufacturing Khamenei’s desired outcome.

In the second scenario, if sanctions are not lifted before the June elections (or after his failed attempt at the presidency, as above), Zarif will likely claim that the IRGC is “after him” and make out that his life is in danger as a way to seek exile abroad. Having achieved this, the smiling diplomat will then serve Khamenei by becoming the regime’s mouthpiece abroad and lead propagandist. While this may seem like a stretch to many Western readers, there is in fact a strong precedent for this. In 2009, the well-spoken, English-speaking Hossein Mousavian — Iran’s ambassador to Germany (1990-97), head of the Foreign Relations Committee of Iran’s National Security Council (1997-2005), and spokesman for the 2003-05 nuclear negotiations under “reformist” President Mohammad Khatami — was granted exile in the U.S. and made a “visiting” scholar at a prestigious U.S. university after claiming the IRGC had accused him of espionage. While Mousavian was sentenced to two years in jail for “endangering national security” in Iran, remarkably he was allowed to travel to the United States before he was imprisoned.

Once in “exile” Mousavian explicitly showed loyalty to the supreme leader and “continued to, and continues to, work hard for the system [of the Islamic Republic].” In fact, these were the words Zarif used to describe his good friend Mousavian in a March 2016 interview. Zarif said he did not believe the “accusations of espionage against him” and asserted that Mousavian is someone who “believes in, and is completely tied to, the system of the Islamic Republic and Iran.” He added that “in the U.S., Europe, and in international conferences, Mousavian beautifully defends the interests of the Islamic Republic” to the point where if official Iranian diplomats can’t participate in a conference abroad, he often fills the void. Mousavian is by no means the only example. Ataollah Mohajerani, the former minister of culture and Islamic guidance who justified Ayatollah Ruhollah Khomeini’s fatwa calling for the British-Indian author Salman Rushdie to be killed, now lives in exile in the U.K., allegedly because of an illegal affair in 2004, but continues to be the regime’s mouthpiece abroad.

A new role for Zarif?

This is precisely the role Khamenei has envisaged for Zarif and the “leaked” recording has put this well in sight. For Khamenei, it is clear that the manufactured “reformist-hardliner” political game to fool the Iranian population into backing the system no longer has buy-in internally in Iran, with approximately 78% of Iranians set to boycott the June elections, according to a recent poll by the Group for Analyzing and Measuring Attitudes in Iran (GAMAAN). As the militarization of the regime continues, the ageing ayatollah also appears to have come to the conclusion that preserving his hardline support base is enough to maintain the authoritarian regime. But where the so-called “reformists” can play a key role for Khamenei is overseas as a way to defend the regime’s interests, fueling the Islamic Republic’s lobbying efforts abroad and influencing Western policy toward the clerical regime. To have Zarif — who is without a doubt Tehran’s greatest asset in this regard — playing such a role would be invaluable. Indeed, we have seen the smiling diplomat use his perfect English and charm to defend the most horrific aspects of the regime’s ideology, all while retaining his popularity abroad: from justifying the execution of homosexuals in Iran on “moral principles” to defending the clerical regime’s policy of wiping the “Zionist regime” (Israel) off the map. As a senior International Atomic Energy Agency official who had negotiated with Zarif once told me, “Zarif was a highly brilliant diplomat and so able that one had to be really careful not to be tricked by him.” This is precisely what Khamenei wants from him. To have Zarif abroad is far more useful for the Islamic Republic than to have him in Iran. In fact, a closer examination of the recording reveals that, if anything, Zarif is just as much of an ideologue as the others in the system, insistent that he is firmly devoted to Khamenei and a believer in the fundamentals of the Islamic Revolution.

Both scenarios laid out above therefore lead to the same outcome: Zarif departing Iran for “exile” abroad to carry another mission assigned to him by Khamenei, similar to Mousavian and Mohajerani. Regardless of whether one believes this “leak” was intentional or not, given that the outcome — namely, Zarif seeking “exile” abroad — is a highly likely scenario, the West should carefully consider the implications of granting Zarif residency.

At a time when ordinary Iranians with family in the U.S. and Europe have been refused tourist visas and barred from entering the West, to grant Zarif — the man who has defended the oppression of the Iranian people and has propagated the Islamic Republic’s hateful ideology — residency on Western soil would send a terrible message to the Iranian population. The West must be careful not to fall into this trap.

Kasra Aarabi is a non-resident scholar with MEI's Iran Program and an analyst in the Extremism Policy Unit at the Tony Blair Institute for Global Change, where he works on Iran and Shi'a Islamist extremism. The views expressed in this piece are his own.