The Future of Regional and International Dynamics in the Middle East 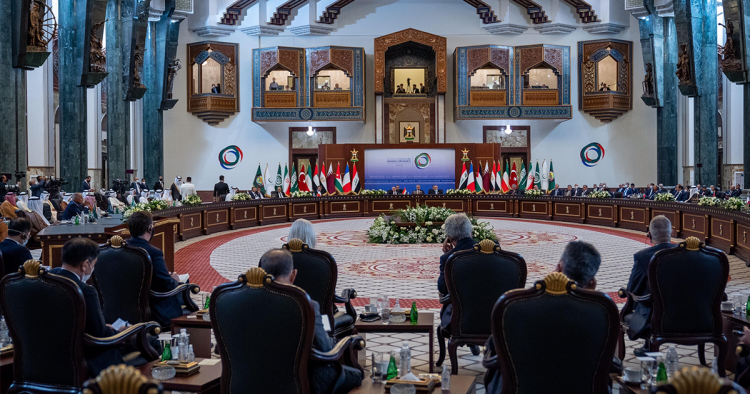 Amid the troubling imagery of a Taliban victory in Afghanistan, teetering governments in Lebanon and Iraq, and ongoing civil wars in Syria, Yemen, and Libya, it is hard to defend the view that the future of the Middle East will be better than the present. Pessimism about the region’s future has become accepted as a truism among those of us who observe and analyze this troubled part of the world.

But pessimistic projections that the region will remain mired in its current state of turmoil cloud our ability to properly analyze the future as much as, or even more than, naïve and gratuitous optimism. American baseball star Yogi Berra summed it up when he said, “It’s tough to make predictions, especially about the future.” When tempted to accept either wildly optimistic or excessively pessimistic views of the future of the Middle East, we should bear this quote in mind.

But being humble about our ability to ponder the future of the Middle East shouldn’t blind us to some of trendlines that give us a glimpse of what the future might hold. The region is currently undergoing some transformations that are likely to leave an indelible imprint on it going forward.

While unexpected jolts can always render any trend ephemeral, there is one ineluctable trend underfoot that is likely to endure and be a feature in the medium and long term. The Middle East is undergoing a profound transformation from a region shaped by outside powers to one taking shape according to its own internal political logic. The European colonial powers in the late 19th and early 20th centuries divided up the region according to their own agendas and exigencies. And later during the Cold War the United States and Soviet Union imposed their rivalry onto a Middle East just emerging from the yoke of European colonialism.

But today, as bloody and unstable as the Middle East is, the catalysts for change aren’t external powers, but rather the local civil wars in Syria, Yemen, and Libya and the regional rivalry between Iran, Saudi Arabia, Turkey, and Israel. While this shift of the Middle East being more sensitive to regional and local drivers than global dynamics has been ongoing for several decades, the civil wars and state failures in the region have created a tipping point in this regard that is likely irreversible.

The civil wars have become engines of this enduring transformation in several ways. First, while the civil wars were spawned by local grievances against autocratic leaders, looking at them from the regional level we see these conflicts collectively represent a struggle for what the basis of political identity, community, and governance will be in the Middle East. How will the state fare as an organizing principal for the region and as a receptacle for the political, social, and economic ambitions of a young and increasingly restive population? What role will regional institutions like the Gulf Cooperation Council and Arab League play in the Middle East in the future? And what will the role of non-state actors be? The outcome of the civil wars in Syria, Libya, and Yemen will help determine the answers to these questions.

Second, the civil wars have created a large, hollowed-out political vacuum across the Middle East, which has drawn in the regional powerhouses of Iran, Saudi Arabia, the UAE, Turkey, and Israel. Because of this, there is a tendency to see the civil wars in Yemen, Syria, and Libya as proxy battles. While this dynamic is an important feature of the civil wars, a preoccupation with the proxy involvement obscures the bigger picture of these country-level civil wars having spawned a broader regional civil war involving Iran, Saudi Arabia, Turkey, and Israel. It is a battle, not for territory, but rather for regional influence and power. In other words, while the major regional powers are pulling the strings in the country-level civil wars, they have also become victims of a regional civil war, which is being waged over the future of the Middle East.

What we can’t posit with any degree of confidence is which country, if any, will rise above the others in this regional rivalry. This will depend on several factors. One is the state of leadership in each of these countries. How long will President Recep Tayyip Erdogan dominate the political landscape in Turkey? Who will succeed Iranian Supreme Leader Ayatollah Ali Khamenei? What path will Saudi Arabia take under the strong but oft erratic leadership of Mohammed bin Salman? And what will the composition of the governing coalition in Israel look like? Also, how will the leaderships in these countries respond to the cascading pressures of COVID, climate change, economic dislocation, and empowered youth populations?

"The Middle East is undergoing a profound transformation from a region shaped by outside powers to one taking shape according to its own internal political logic."

There is an overriding fear that Iran’s growing regional footprint presages it becoming the dominant player in the Middle East. While this is one possible scenario, we should temper a rush to judgement with an understanding that Iran’s current regional influence is largely a function of its ability to project power into failing states. Should the civil wars wind down, and resistance in Iraq and Lebanon to Iran’s heavy hand increase, Tehran’s capacity to project power could become significantly attenuated. The wildcard will be whether Iran can transition to a new set of capabilities that allows it to thrive in a more normalized region. This sets up a strategic paradox for the Islamic Republic, the outcome of which we cannot predict. While Iran (like all regional powers) can only thrive long term in a more normalized region, its shorter-term fortunes may depend on its ability to act as a spoiler, perpetuating the current status quo of regional instability.

Another hedge against a dominant-Iran scenario is that the Middle East doesn’t have the characteristics of a hegemonic system, but will more likely evolve into a region defined by balance-of-power politics. The current civil wars and state weakness may mask this reality, but a strong Turkey and perhaps even a revitalized Arab world could eventually contain any Iranian expansionist ambitions. Unlike in East Asia, where China dominates, there is no such counterpart in the Middle East. While Iran may appear to be a dominant power in a collapsed regional system, this could prove ephemeral should the civil wars wind down.

What trends can we see entailing the global powers in the Middle East? While during previous eras, it was the international players that were the disrupters on the local scene, now the roles have reversed somewhat, with the Middle East acting as a disruptor of the international political order. In other words, what starts in the Middle East doesn’t stay there; rather it globalizes. Over the past decade, refugee flows, the specter of terrorism, disruptions to oil supplies, and energy price gyrations, have roiled the international system, shaping the political discourse in Europe and the United States. This is likely to intensify with the collapse of the Afghan government, the resurgence of the Taliban, and the possible boon this could provide to al-Qaeda and even ISIS.

In the future the global powers will likely continue using the Middle East as an arena of great power competition. But the past patterns of global powers shaping the region in their own image, such as during the Great Game of the 19th century, the Cold War of the 20th century, and the Pax Americana of the 21st century, are unlikely to be repeated. In order for the global powers to serve their own interests and to mitigate the disruptive effects of the Middle East on the international political order, relationships with regional actors will likely be based more on partnerships than the principal-client relationships of the past. For sure, the global powers boast military and economic superiority over the region. But for the security and economic interests of the global powers to be served, they will need to take account of the strategies and plans of the major regional players.

More specifically, for the United States the current strategic paradox is likely to endure into the future. At a time when the case is being made that Washington has few vital interests in the Middle East to defend, the region has the greatest potential to disrupt the international political order. How the United States manages this paradox will determine how it fares in the region generally, and in its competition in the Middle East with Russia and China more specifically.

We don’t know the specifics of what the future will bring for the Middle East or the role the global powers will play in this critical region. But the fact that the Middle East is being transformed from within, with great powers being able to influence, but not shape the region, suggests an ineluctable trend. The specific shape of the region is hard to envisage and impossible to predict but like at the end of the bloody Thirty Years’ War in Europe in the 17th century, we can be reasonably certain that the turmoil of today will create a lasting legacy for the future, and that it will be mostly the regional powers that will determine that future, with the global powers as supporting actors.

Ross Harrison is a senior fellow and director of research at the Middle East Institute.