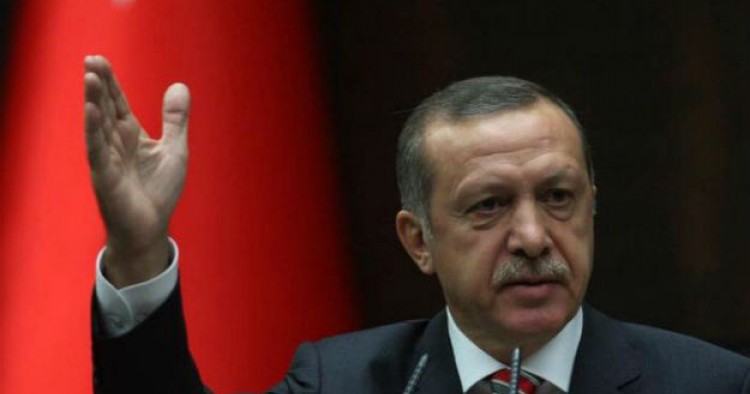 The Israeli incursion into Gaza and the ensuing diplomatic efforts to end the violence have revealed Turkey’s waning influence in the region.

The Turkish government has been promoting itself as a potential mediator between Israel and Hamas.  The latter’s rejection of an Egyptian ceasefire in mid-July bolstered Turkey’s hopes of playing a key role, as did its inclusion in this past weekend’s Paris summit hosted by U.S. Secretary of State John Kerry.

Capitalizing on his close ties to Hamas leader Khaled Meshaal, Erdogan had been hoping to assume the role played by ousted Egyptian president Mohammed Morsi in securing the cease-fire between Hamas and Israel in November 2012.

Though highly unlikely under current circumstances, a Turkish-brokered cease-fire ending civilian deaths and violence would yield three benefits: it would increase Erdogan’s standing among the Turkish electorate ahead of presidential elections in August (and the public is united in condemning Israel for the Palestinian deaths); it would divert attention away from the highly contentious domestic agenda; and it would restore Turkey to the regional stage as a decisive player.

However, Turkish ambitions to orchestrate the peace talks between Hamas and Israel (as Morsi did successfully in 2012) are complicated by regional events of the past two years.

In 2012, Morsi pursued a balanced approach that was both pragmatic and principled: to deliver the cease-fire and to stand in support of the Palestinians. He engaged Hamas, expressing his strong support for the Palestinian cause, recalling his ambassador from Israel, and dispatching his prime minister to Gaza in a show of solidarity with Gazans.  At the same time, Egyptian security officials met an Israeli envoy who flew secretly to Cairo for talks. Morsi held talks with Turkey's prime minister and the emir of Qatar, and a host of top Arab officials to get them behind his mediation. Although he disagreed with Obama over whom to blame for the violence in Gaza, he worked with the United States to halt it.

Erdogan is in no position to lead the diplomatic efforts to end the crisis and build a consensus among the major stakeholders. Except for Qatar and Hamas, Turkey’s relationship with the relevant actors -- Egypt, Saudi Arabia, the United Arab Emirates, the United States, and Israel -- has taken several blows over the last years. The Fatah-led Palestinian Authority of Mahmoud Abbas opposes a major Turkish involvement in the matter due to what he sees as overly friendly relations between Hamas and Turkey at the expense of the PA, dashing Erdogan’s hopes to reclaim Turkey’s leadership role in the region by brokering a cease-fire in the Gaza conflict.[1]

After-effects of the Arab uprisings in Egypt dealt another blow to Turkey’s ties to several regional actors.

Turkey has been a staunch supporter of the Muslim Brotherhood in the region and had been particularly close to Egyptian President Morsi and Hamas leader Meshaal. When the Egyptian army toppled the Muslim Brotherhood-led government in Egypt, Turkey found itself at odds with Saudi Arabia, which provided political and financial support to coup leaders. The rift between Turkey and Saudi Arabia and Egypt became more prominent after Egypt banned Hamas, a Muslim Brotherhood offshoot, and Erdogan became more vocal in his criticism of Sisi and his supporters. Saudi Arabia, Bahrain, and the United Arab Emirates withdrew their ambassadors from Qatar due to its backing for the Brotherhood, which only added to Turkey’s regional isolation.

Turkey’s relationship with Israel remains strained since 2010, when nine Turks and one Turkish-American citizen were killed during an Israeli assault on a flotilla in international waters, en route to the Hamas-controlled Gaza Strip to deliver humanitarian supplies. After the incident, Turkey downgraded diplomatic ties with Israel and said it would not restore them until Israel formally apologized and paid compensation. Under a U.S.-led effort, Israel issued an apology and the two sides were getting ready to sign a compensation deal for families of the Turkish victims. But the most recent Israeli attack against Gaza seems to have halted the normalization process between the former allies. In a recent statement, Erdogan said, “All possible steps towards the normalization of relations with Israel have been locked in a box because of the recent Israeli atrocities in Palestine.”[2] Israel, on the other hand, strongly opposes any major Turkish role in the talks with Hamas.

Turkey-US relations also have been rocky in the past year. Ankara was critical of Washington’s stance on the coup in Egypt and its failure to pursue a more forceful Syria policy; the White House is displeased with Turkey's stance on Egypt and its tacit approval of weapons transfers from its territory to Al-Qaeda linked groups in Syria, and the government’s meddling in freedom of speech and media. The bilateral relations hit a new low when Erdogan unsuccessfully urged President Obama to extradite the Pennsylvania based Islamic preacher Fethullah Gulen who he accused of creating a “parallel state” and attempting to topple Erdogan’s elected government.[3]

Egyptian efforts to broker a deal between Israel and Hamas seem to be deepening the rift between Cairo and Ankara. In a recent statement, an infuriated Erdogan accused Sisi of using the crisis in Gaza and his role as mediator to legitimize his rule and called him a "tyrant" who could not be trusted to broker a cease-fire agreement. Sisi charged Turkey and Qatar with sabotaging the cease-fire proposal Cairo drafted after Hamas rejected the Egyptian initiative. Hamas is adamant that Turkey and Qatar lead the cease-fire talks, but the US, Israel, and PA President Mahmoud Abbas insist that Egypt orchestrate the talks.[4]

As the civilian death toll soars and more and more Turks from all walks of life take to the streets in protest, Prime Minister Erdogan continues to lash out at Israel, the US and the Arab world for not doing enough to stop the bloodshed. This will win him favorable views among the Turkish electorate ahead of presidential elections in August. His effort to promote Turkey to broker a cease-fire, however, is increasingly a long shot considering the opposition from the Saudis, UAE, Israel, Egypt, and the US.

Marginalized and isolated in regional affairs four years after the start of the Arab uprisings, Turkey will have to settle for a secondary role in the Hamas-Israeli conflict. Prime Minister Erdogan might pressure Hamas leader Meshaal to agree to an immediate truce before negotiating the terms of the deal. This might help Turkey break out of its regional isolation, restore its broken image in Washington and alleviate the pressure on the government brought about by its highly criticized regional policy.