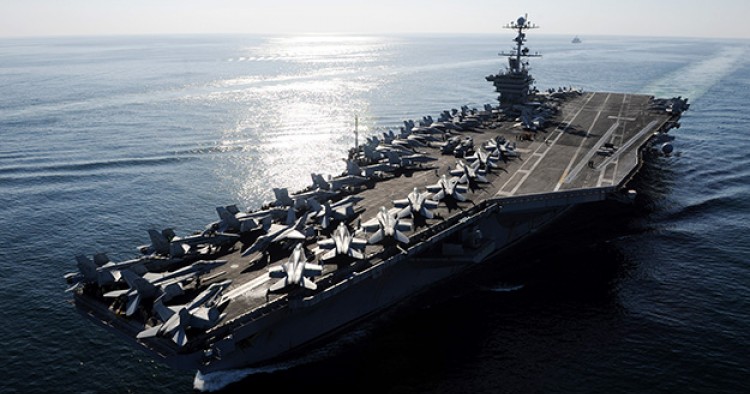 The term “strategic partnership” has been increasingly used in GCC circles to signify that relations with China are important and worthy of long-term investment. In a March 14, 2014 speech during his visit to Beijing, Saudi Arabia’s then Crown Prince Salman announced that “we are witnessing the transformation of the relationship with China to one of strategic partnership with broad dimensions, to the benefit of both our countries.”[1] Saudi Arabia’s position was echoed by the emir of Qatar during a 2014 visit to China in which issues of common concern to all GCC states, especially combating terrorism, were discussed.[2] Abdel-Aziz Aluwaisheg, GCC general assistant secretary for negotiations and strategic dialogue, has also noted that there is growing interest in the Gulf to develop a “strategic dialogue” with China.[3]

Despite this growing GCC recognition of China’s strategic role in the region, what exactly a “strategic partnership” or “strategic dialogue” would look like remains unclear. This essay discusses why officials in GCC member states might be hesitant to embrace the idea of China as a viable strategic military partner, while at the same time recognizing the need to further develop relations with China.

From the perspective of GCC leaders, the main military advantage of partnership with China is Beijing’s potential willingness to provide weapons that the United States is currently reluctant to sell. Given the United States’ lukewarm responses to recent regional unrest, the GCC countries are seeking to augment their independent capabilities, and China could be an important supplier, whether or not it is a full “strategic partner.”[4] These GCC views are based on the understanding that as economic interdependence grows, China might be more willing to provide advanced weapons systems in greater quantities. It is important to note that looking to China for arms sales is consistent with the GCC states’ broader strategy of expanding their network of suppliers.[5]

However, GCC leaders continue to assess the benefits of such an arrangement through the prism of their enduring relationship with the United States. This is largely due to historical momentum. GCC states have long procured most of their military hardware, training, intelligence systems, and combat systems directly from the U.S. government or from American businesses. In addition, the United States and its allies share GCC concerns about containing regional conflicts in Iraq and Syria, as well as the region-wide threat posed by al-Qa‘ida and its affiliates.[6] Furthermore, it seems that despite its reluctance to sell certain weapons directly to the GCC, the United States has tacitly approved GCC purchases of such weapons from China.[7] This balance―whereby the United States sells the GCC most of its conventional weapons systems, while GCC states purchase other approved weapons elsewhere―allows the GCC to accrue the benefits of remaining within the U.S. umbrella while also buttressing its defenses. Obtaining military hardware from China that the United States has not approved would involve an extremely delicate diplomatic game—one in which the GCC stands to lose more than it would currently gain.

Securing the Gulf and Confronting Iran

Despite the GCC states’ political disagreements, they concur that Iran remains a primary threat that must be contained and, if necessary, confronted. The United States has historically held a similar view. But tensions between Iran and the United States have recently eased, and their ongoing engagement leaves the GCC in a quandary. American support for a hard-line GCC position vis-à-vis Iran would likely wane if U.S.-Iran nuclear negotiations succeed.

However, China might not be a strong partner against Iran, either. China’s framing of its foreign policy as non-interventionist and respectful of national sovereignty has appealed to GCC states. Historically, China has supported Arab liberation, siding with the Palestinians in the Arab-Israeli conflict and waiting to establish diplomatic relations with Israel until 1992, following Arab-Israeli peace treaties. More recently, when the United States and its allies were critical of the GCC’s intervention in Bahrain, China remained largely mute on the subject, potentially signaling that it would be a more understanding partner than the United States regarding internal security threats. China’s abstention from a United Nations Security Council (UNSC) vote on intervention in Libya was interpreted in a similar vein.

GCC states’ perceptions of China’s neutrality, however, began to weaken with its veto, alongside Russia, of a 2012 UNSC resolution on Syria. The Chinese government sought to portray this vote as “impartial,”[8] but from a GCC perspective, China’s “impartiality” in regard to Syria represented a tacit alliance with Russia and, importantly, Iran. This indirect support for Iran on such a crucial issue as the Syrian conflict reminded the GCC states that China’s security and military relations with Iran are far clearer than the ties it has established—or has proposed to establish—with the GCC.[9] Close observers of the GCC believe that Iran has been able to maintain a belligerent position vis-à-vis the Gulf precisely because Iranian leaders feel protected by Russia and China. The potential for even closer ties between China and Iran is of great concern to the GCC.

Worries over China-Iran ties have been aggravated by issues pertaining to Gulf navigation and maritime security. It is not China’s sole responsibility to ensure Gulf maritime security; GCC leaders acknowledge that the United States, Europe, and Japan all have important roles to play in helping to secure trade routes. However, China’s massive energy trade with Gulf states means that it has a particular interest in securing regional pathways. By 2025, 75 percent of China’s trade will pass through the Strait of Malacca, one of the most important arteries of international trade for Asian, Gulf, and European economies.[10] In order to secure transport between the Gulf and the Strait, China has spent approximately $1 billion to develop the Pakistani port of Gwadar. China is also involved in counter-piracy measures in the Red Sea.[11]

Despite this convergence of interests on maritime security, China shied away from joining the Combined Task Forces responsible for monitoring and controlling shipping in the Red Sea, Gulf of Aden, Indian Ocean, and Gulf of Oman; from disrupting piracy in the Horn of Africa; and from ensuring maritime security in the Gulf.[12] China instead chose to establish its own naval presence in the Gulf of Aden in order to carry out counter-piracy missions (though the Chinese Navy has also been coordinating with present forces). In addition, China engages with Iran to monitor maritime security and to develop mutual military capacities.[13] Together, these moves are problematic for GCC leaders, who see China either acting alone or coordinating with Iran. Since GCC states see regional security through an Iran-centric prism, China’s “neutrality,” which appears to favor coordination with Iran, amplifies GCC apprehensions about accepting China as a viable military partner.

Securing the Levant and Containing Israel

Led by Saudi Arabia, the GCC proposed a peace plan for Israel/Palestine in 2002 that did not succeed, and since no state has been able to effectively deter or compel Israel, GCC states perceive parity with Israel as an important goal. Advanced military systems do not act solely as deterrents toward Israel but also allow GCC states greater maneuverability in other theaters. Given its own historical relationship with Israel, however, the United States’ selective arming of GCC states has pushed the balance to Israel’s favor.

Thus the GCC continues looking elsewhere for help in building its military capabilities. No indicators exist, however, that China would assist GCC states in achieving military parity with Israel.[14] It is important to note that Washington reportedly approved the often-discussed Chinese sale of ballistic missiles to Saudi Arabia in 2007 “on the condition that CIA technical experts could verify they were not designed to carry nuclear warheads.”[15]

Despite China’s heavy reliance on Gulf hydrocarbons, it is unlikely to risk disturbing its relations with Israel, which have expanded into such sectors as agriculture and the military.[16] Since a GCC-China strategic military partnership would thus not fulfill the goal of parity with Israel, it is less appealing to GCC leaders, and certainly not worth the risk of losing U.S. patronage.

The historical momentum of GCC-U.S. relations makes GCC states hesitant to develop a military partnership with China. As the United States reduces its military presence in the Gulf, parallel to its planned reduction in global security engagements,[17] the GCC’s reliance on the United States could also decrease. This would translate into more selective and assertive GCC foreign policies globally, including vis-à-vis China. In this scenario, opportunities for a “special” China-GCC relationships increase.[18] However, today, the GCC’s security framework is an extension of NATO,[19] which adds to the GCC states’ reluctance to embrace a partnership with China.[20]

The GCC states’ security concerns are predominantly regional, and their choice of a strategic partner reflects what they think such a partner can deliver on regional fronts. In concrete policy outcomes, China aligns with the United States on regional security issues of interest to GCC states (though of course the two states have different reasons for their policies). For example, GCC states prioritize containment of Iran, yet both the United States and China are defusing tensions with Iran. Moreover, China waited before establishing diplomatic ties with Israel, but now their partnership is solid. There is no convincing evidence that China would compromise that relationship with arms deals that permit the GCC to achieve parity with Israel. For its own reasons, the United States also resists attempts by Arab states, including the GCC, to achieve parity with Israel. China’s pro-Arab position in the conflict with Israel was special during the Cold War, but its current stance casts it as calculating, rather than pro-Arab, and its relations with Iran follow similar rationalist dictums. Hence, while GCC states might want more military support than the United States is willing to provide, under current circumstances it is not clear that a partnership with China would offer substantially different results.

The author thanks Zafer Alajmi, Naser al-Tamimi, and Joseph Kéchichian for their insights.

[3] Abdel-Aziz Aluwaisheg, “China-GCC Strategic Dialogue Resumes,” Arab News, January 19, 2014, http://www.arabnews.com/news/511401. Mechanisms for dialogue on cultural and social issues exist between China and Arab states, such as the China-Arab Cooperation Forum. China is interested in expanding the scope of these mechanisms, as expressed by Minister of Foreign Affairs Wang Yi at one such meeting. Wang Yi, “Upgrading China-Arab Relations,” China Daily, June 3, 2014, http://usa.chinadaily.com.cn/opinion/2014-06/03/content_17558051.htm.

[4] Saudi Arabia has reportedly acquired ballistic missiles from China that can reach Iran, Israel, and Iraq. Con Coughlin, “Saudi Arabia Throws Down a Gauntlet by Targeting Missiles at Iran and Israel,” The Telegraph, July 11, 2013, http://www.telegraph.co.uk/news/worldnews/middleeast/saudiarabia/10173776/Saudi-Arabia-throws-down-a-gauntlet-by-targeting-missiles-at-Iran-and-Israel.html.

[20] The GCC states’ reliance on a source other than the United States for protection is unlikely. Given GCC interests, however, military cooperation on tactical and logistic supplies might pave the way for a closer relationship with China. See Naser M. al-Tamimi, China-Saudi Arabia Relations, 1990-2012: Marriage of Convenience or Strategic Alliance? (Abingdon, UK: Routledge, 2013).