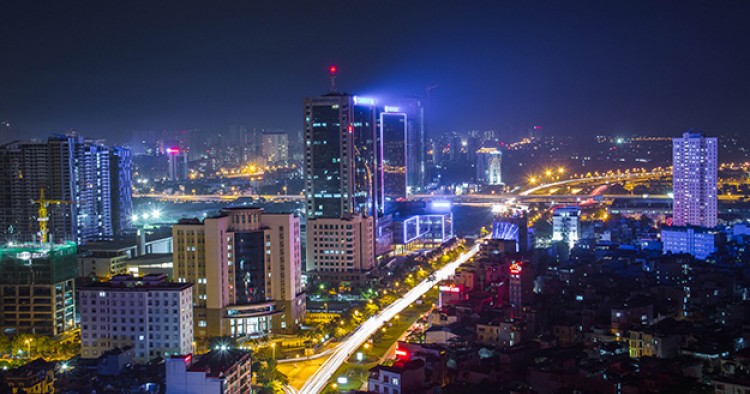 During the 1970s the Communist Party dominated almost all walks of life in Vietnam. This strict control, especially in regard to the economy, failed to achieve sustainable development. Vietnamese authorities then began to pursue a policy of openness to the outside world, and the Doi Moi, or “renovation,” was launched in 1986.[1] As a result of this and other gradual reforms, Vietnam has become one of the fastest-growing economies in Asia, with annual GDP growth averaging 7.1 percent between 2000 and 2012[2]—a rate that the country is expected to sustain over the next decade. In this context, Gulf Cooperation Council (GCC)-Vietnam relations are promising and may develop steadily over the coming years.

Since the 1990s, bilateral ties between the GCC countries and Vietnam have witnessed smooth and rapid development. Kuwait has set the pace. It was the first of the Gulf states to establish diplomatic ties with Hanoi (1976) and the first to host a Vietnamese embassy on its soil (2003).[3] Kuwait’s then-Prime Minister Nasser al-Mohammed al-Ahmed al-Sabah visited Hanoi in May 2007; it was the first visit to Vietnam by a Gulf leader.[4] Kuwait was also the first to engage in trade with Vietnam, to have a banking presence in the country, and to provide development aid, through the Kuwait Fund for Arab Economic Development.[5]

In 2010, during the visit of Vietnamese President Nguyen Minh Triet to Riyadh, King Abdullah of Saudi Arabia pledged to promote investments in Vietnam, not only in oil and gas but also in finance, banking, and industrial production. Saudi Arabia also agreed to help Vietnam develop infrastructure in rural and mountainous areas and improve the professional skills of Vietnamese guest workers.[6] The two countries have also signed a number of agreements to foster economic cooperation.

Ties between Vietnam and the UAE have also developed steadily over the past two decades. On August 1, 1993, the two countries established diplomatic relations.[7] Since then, high-level visits, including that of Sheikh Mohammed bin Rashid al-Maktoum, the Vice President and Prime Minister of the UAE (in September 2007), have cemented the bilateral relationship.[8]

In January 2012, the emir of Qatar, Sheikh Hamad bin Khalifa al-Thani, and Hanoi signed a Memorandum of Understanding (MOU) on cooperation in tertiary education, scientific research, banking, and investment.[9] The emir also expressed his country’s willingness to receive workers from Vietnam,[10] while his counterpart, President Truong Tan Sang, pledged to support Qatar’s efforts to set up a training and recruitment center in Vietnam and to establish a joint investment fund.[11]

Source: Compiled by the author from various media reports.

Today, the GCC countries are the most important trade partners for Vietnam in the MENA region. Since Vietnam joined the WTO in 2007, trade between Vietnam and the GCC has flourished, driven mainly by Vietnamese exports. According to the Vietnamese Ministry of Industry and Trade, two-way trade between Vietnam and the GCC has risen from $392.4 million in 2003 to $4.87 billion in 2012.[12] By the end of 2012, the GCC emerged as Vietnam’s thirteenth largest trading partner. The UAE continued to be the largest consumer of Vietnamese goods in the region, with imports reaching $2 billion.[13] In the first half of 2013, Vietnam’s exports to Saudi Arabia were $176.6 million and $15.7 million to Kuwait.[14] Vietnam’s exports to the GCC have a promising future, as the region is a huge potential market for Vietnamese farm produce, processed goods, and equipment.[15]

The UAE is currently Vietnam’s largest trade partner in MENA and its seventeenth largest export market overall. Emirati businesses have invested about $1.5 billion over the past decade in hotels and high-rise buildings in Vietnam, even though investments slowed during the global downturn.[16] Currently, nearly 70 Vietnamese businesses are engaged in exporting labor to the UAE, and about 7,200 Vietnamese work in the Emirates in fields such as construction, engineering, shipbuilding, hotels, refrigeration, plastics, textiles and garments, and security.[17]

In October 2009, the DP World Group and the Tan Thuan Industrial Promotion Company set up a joint venture to build the $360 million Saigon Premier Container Terminal (SPCT) on the Soai Rap River’s Hiep Phuoc Industrial Park. The terminal covers an area of ​​39.13 hectares with a design capacity of 1.5 million twenty foot equivalent units (TEUs) per year.[18]

In January 2013, Vietnam’s WorldTech Transfer Investment and the UAE-based Global Sphere started construction on a $300 million solar panel manufacturing plant in Vietnam’s central province. It is expected to be completed in mid-2015. Global Sphere also paired up with Vietnam Royal Group in February 2013 to launch a $30 billion mega real estate project in Vietnam dubbed “Hanoi Wall Street.”[19] The first phase is expected to be finished by 2020 at a cost of $10 billion,[20] and full completion is scheduled for 2030. The complex will accommodate between 300,000 and 400,000 residents.[21] Also, in September 2013, Emirates NBD Bank PJSC agreed to provide $200 million for luxury tourism and resort projects in Vietnam’s southern Khanh Hoa province.[22]

Between 2009 and 2012, Vietnam witnessed four important visits by Saudi ministers, including Minister of Finance Ibrahim al-Assaf. Saudi Arabia’s Minister of Petroleum and Mineral Resources, Ali Ibrahim al-Naimi, expressed interest in developing a strategic partnership between Saudi Aramco and the Vietnam National Oil and Gas Group (PVN) at a meeting with PVN leaders on June 10, 2009.[23] During a subsequent visit, al-Assaf signed loan agreements approved by the Saudi Arabia Development Fund to build two road projects.[24] Saudi Arabia also seeks to promote food security, and is looking to develop its relations with Vietnam in this area.

Industrial cooperation between Vietnam and Kuwait is mostly visible in the field of oil and gas.[25] Kuwait seeks to cultivate downstream interests in markets with high potential demand growth, specifically China, Vietnam, and Indonesia.[26]  Indeed, Kuwait Petroleum International (KPI) joined with PetroVietnam and Japanese Idemitsu in April 2008 to construct a refinery in Nghi Son, Vietnam. In October 2013, Kuwaiti Oil Minister Mustafa al-Shamali made an official visit to Vietnam during which he attended the groundbreaking ceremony of the refinery.[27] Construction is expected to be completed in the fourth quarter of 2016, and commercial operations are expected to commence in mid-2017 with a refining capacity of 200,000 barrels/day, equivalent to 10 million tons per year.[28]

Qatar Petroleum International (QPI) signed an agreement with Vietnam Oil and Gas Group to purchase a 25 percent share in the Long Son petrochemicals complex in Vietnam’s southern province of Ba Ria-Vung Tau.[29] The $4.5 billion project will be Vietnam’s first petrochemical complex in this industrial zone.[30] Tourism is another important area of cooperation between Qatar and Vietnam. Nguyen Quy Phuong, director general of the travel industry management department at the Vietnamese Ministry of Culture, Sports, and Tourism, told the Doha-based Gulf Times that his country has started work on a number of Qatar-backed tourism projects as part the Gulf state’s plans to invest up to $4 billion in the Far Eastern country.[31]

At present, Vietnam is an attractive destination for foreign investors and has long-term growth potential,[32] in large part owing to rising wages elsewhere in the region, particularly China.[33]  Vietnam has a large, skilled, and low-cost workforce, which has made the country attractive to foreign investors. Vietnam’s location—that is, its proximity to China and its position in Southeast Asia—coupled with its good sea links makes the country a good base for foreign companies to export to the rest of Asia and beyond.[34]  In addition, Vietnam is increasingly attracting investment from key Asian economies, such as Japan, South Korea, and Taiwan. This offers the possibility of the transfer of high-tech skills and know-how.[35] Deepak Mishra, until recently the World Bank’s lead economist in Vietnam, notes that some experts argue “that Vietnam’s manufacturing sector is perhaps at the stage where China was in the late 1990s, when high-tech exports suddenly took off.”[36] It isn’t just on the hardware side. A number of new tech start-ups are turning Vietnam into a player on the Asian software development scene.[37] The U.S. National Intelligence Council’s (NIC) latest report, “Global Trends 2030: Alternative Worlds,” predicts that Vietnam’s regional power will continue to grow.[38] Business Monitor International also predicts that Vietnam’s real GDP growth will average 6.6 percent over 2013-2022, and foresees a more stable economic environment.[39] Vietnam thus offers an opportunity for investment across a wide range of sectors for the governments and firms of the GCC.[40]

Against this optimistic backdrop, Vietnam’s economy still faces challenges that must be dealt with quickly and effectively. In its latest trade policy review for Vietnam (August 2013), the WTO Secretariat noted that significant weaknesses persist and pose risks to Vietnam’s immediate economic outlook, though action is being taken to address them.[41] These weaknesses relate to the relatively incomplete transition to a market economy, persistent macroeconomic instability, systemic risks facing the financial sector, and delays in state owned enterprises (SOE) reforms.[42] Vietnam must urgently engage in a second wave of reforms, including the large-scale privatization of state-owned companies as well as banking sector reform.[43] Indeed, the World Bank in its October 2013 “East Asia and Pacific Economic Update” warned that “if the implementation of structural reforms is delayed further, investor confidence would be undermined, further worsening growth prospects.”[44]

From a trade competitiveness perspective, the World Bank also noted that Vietnam’s growth potential is being constrained by weak transport infrastructure and services.[45] In addition, rising land and labor costs, skill shortages, and policy challenges have hampered investments.[46] Most importantly, Vietnam, as one of the world’s most corrupt countries, needs to tackle its limited governance and transparency. According to Transparency International’s 2012 Corruption Perceptions Index, Vietnam ranks 123 out of 176 countries.[47]

Nevertheless, it is clear that Vietnam’s economic relations with GCC countries have widened and deepened in recent years. While much has already been accomplished, there is great potential for further development.