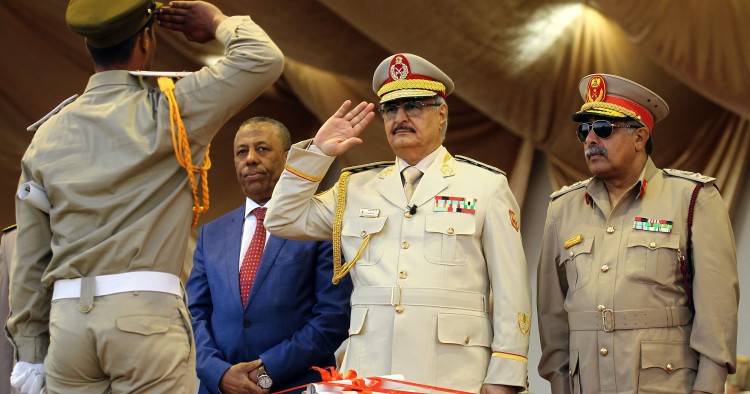 In January 2019, the Libyan National Army (LNA) loyal to General Khalifa Hifter launched a military operation to capture the Fezzan region in Libya’s southwest. The operation, which is supposedly aimed at combating terrorist and criminal groups, as well as restoring stability, will also help to consolidate the general’s control over the long-neglected region.

If successful, General Hifter’s campaign risks disrupting the negative peace between the country’s main antagonist factions. It could also reignite the inter-communal violence that plagued Fezzan in the years after the fall of the Gaddafi regime in 2011. So far, the international community been worryingly complacent, perhaps signaling this may be an interlude to an internationally-sanctioned recasting of Libya’s balance of power.

Fezzan’s vast and lawless desert, which links Sub-Saharan Africa to the shores of the Mediterranean, makes the region a hub for myriad illicit and terrorist activities. Smuggling of all sorts – people, oil, gold, weapons, and drugs – is rampant, while terrorist and militant groups from Libya and neighboring countries (especially Chad and Sudan) roam freely. The ripple effects from such an unstable and volatile environment have not only affected Libya’s neighbors, but have also become a major concern for Europe.

France, a strong backer of the LNA’s Fezzan operation, views Hifter’s advance as vital to enhancing its security and counterterrorism cooperation in the Sahel. In early February, the French Ministry of Foreign Affairs stated that “the recent operations of the Libyan National Army have eliminated important terrorist targets and could permanently hinder the activity of human traffickers that continue to plague this region.” Additionally, LNA attacks on Chadian rebels near Murzuq forced them to flee to northern Chad, where French jets targeted their convoys. This may signal a degree of coordination between the LNA and French forces in the region.

Irrespective of motives, many other countries also seem to favor the idea of having a single powerful interlocutor to rein in the “Libyan chaos.” As such, Hifter’s LNA enjoys the support of a number of international and regional backers, including the United Arab Emirates, Egypt, Saudi Arabia, and, to a lesser extent, Russia.

Furthermore, by continuing to create facts on the ground Hifter may be able to garner support outside of his traditional circle of international backers. Even the otherwise hostile Italy, which has lately taken an anti-French stance, has no incentive to oppose Hifter’s maneuvers in Fezzan. Rome may even be forced to reconsider its broader opposition to Hifter, partly to preserve Italian multinational oil and gas company ENI’s oil interests in the region, but also because of its obsession with deterring migration.

Controlling Fezzan will give Hifter the opportunity to monopolize most of Libya’s oil and water resources. In addition to cementing his position as an indispensable security partner, this will help undermine (and perhaps isolate) his weak, internationally recognized rival in Tripoli, the Government of National Accord (GNA). Consequently, Hifter may garner yet more support from the international community.

In order to consolidate control over the newly captured territories, Hifter has adapted a less aggressive modus operandi that contrasts with the systematic violence the LNA recently employed in the eastern city of Derna. The Fezzan operation is a chance to expand his social base while demonstrating his ability to navigate an intricate, multi-ethnic social context. He has also capitalized on the apparent institutional weakness of consecutive Libyan governments, and the inability of the GNA to provide security and governance.

The Fezzan region is home to not only Arabs, but also two other major ethnic groups, the Tubu and the Tuareg. Tensions and inter-communal conflict between these communities has become a common occurrence in Fezzan. Hifter launched the offensive under the banner of fighting “Chadian gangs,” which, along with Sudanese opposition groups, are indeed guilty of undermining stability in Fezzan. This created apprehension among the Libyan Tubu – which populate Fezzan as well as neighboring Chad, Niger, and Sudan – as they have often been depicted as “Chadians” due to their cross-border clan ties.

Instead of confronting them militarily, Hifter has focused on undermining their ties with their counterparts in neighboring countries by winning over influential Libyan Tubu patriarchs and elders. Hifter successfully employed this same strategy in 2016, instrumentalizing tribal ties to take control of vital areas, such as Libya’s oil crescent. Although violence was used against the Tubu in towns such as Murzuq, there is little risk that the Tubu alone could halt Hifter’s expansion. While Libyan Tubu can be negotiated with or (if need be) subjugated militarily, the Tubu groups focused on opposing Chad’s president, Idriss Déby, will likely flee to northern Chad rather than fight Hifter.

Hifter’s campaign began in Sebha, Fezzan’s most populous city, where inter-communal violence is commonplace. He struck a deal with local tribes and power brokers to hand over the city to the LNA. After taking control over key military locations and appearing to provide basic security, Hifter then focused on increasing his forces’ social legitimacy. Truck-loads of food and medicine poured in, and millions of dinars in Russian-printed banknotes were dispersed to help resolve a liquidity crisis. Although the latter is a national problem, it is more pronounced in the Fezzan region. These tactics aimed to garner the support of ambivalent locals by addressing their concerns.

This also demonstrates that Hifter is aware that, although capturing the city was straightforward, his progress is provisional. In a region where allegiances are fluid, his success will be contingent upon maintaining the alliances he has built, as well as containing hostile sentiments against his forces. Militarily speaking, the negotiated settlements Hifter has crafted expedite is goals and enable him to tactically co-opt pre-existing forces, leading ultimately to their inclusion in the LNA structure. This strategy has allowed him to, in a seemingly effortless way, take over the oilfields of Sharara and el-Feel, enabling him to secure control of most of Libya’s oil production facilities.

As Hifter advances in Fezzan, his forces are being stretched thin. As a result, he will need to not only acquire military support, but also leverage his victories to influence the political process and muster further international recognition. Hifter’s takeover of the oilfields was swiftly followed by a series of meetings in Abu Dhabi, one of which pressed the GNA and the National Oil Company to lift force majeure over the Hifter-controlled fields. This took effect  several days later. In practice, Hifter’s international legitimacy, especially among Western countries like France, has gradually increased as he has assumed control over key regions of the country, such as the oil crescent.

This suggests, tacitly or otherwise, that there is international backing for Hifter’s military operation, and a definite tilt toward accepting the legitimacy of military advances made under the auspices of preserving stability. It is debatable whether this approach aims to intentionally undermine the UN Support Mission in Libya’s dialogue-based political process. Nonetheless, it well may lead to a flashpoint that galvanizes the antagonists in the Libyan conflict into a military confrontation as they embrace politics by other means.

Against the backdrop of current developments, the international response should be focused on preventing the subversion of the UN process and avoiding escalation between parties. The recent meetings in Abu Dhabi, attended by Prime Minister Fayez al-Sarraj of the GNA, Hifter, foreign ambassadors, and UN Special Representative of the Secretary-General Ghassan Salamé made no actual mention of the UN’s Action Plan, which is supposed to be Libya’s roadmap toward transition. Although the strategy of leveraging Hifter’s military advances into political influence and a change in national power dynamics could be compelling, it would also have far-reaching consequences.

The current complacency on the part of the international community could result in escalation between antagonist factions and risk triggering a nation-wide conflict. Simultaneously, the credibility of mediators is also at stake as the lack of transparency about developments in the political process threatens to undermine diplomatic success. Efforts to resolve the Libyan conflict built around short-term pragmatism could easily be seen as ill-intentioned opportunism, in turn undermining the very stability those involved are trying to build.

Emadeddin Badi is a non-resident scholar at MEI, researcher, and political analyst who focuses on governance, conflict, and the political economy of Libya and the Sahel. The views expressed in this article are his own.