Geneva Talks Format Should be an Inclusive Roundtable 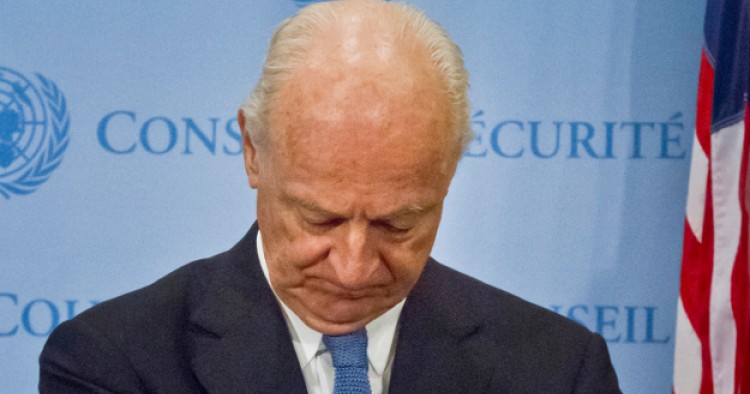 That the Syrian opposition took weeks to agree on a representative delegation hits at an essential problem with the Geneva process: its format. The Russian, American and U.N. architects of the process have retained a regime/opposition binary model that is no longer reflective of the multi-player conflict on the ground. Consequently, attempting to squeeze all non-government forces into a single delegation resulted in a bitter dispute that imperiled the talks before they began—as we saw in the lead-up in regards to which faction should or should not be part of the High Negotiations Committee (HNC). It also precluded from the talks important actors in the war that command significant territory and power, and are essential to a final political solution.

The conflict has evolved well beyond the narrative of 2011 of a people rising up against an autocratic government. The war today is characterized by multiple actors fighting for varied interests, backed by international powers who are also pursuing their own agendas. The beginning of the armed conflict saw a chaotic proliferation of hundreds of rebel groups and brigades focused on the fight against President Bashar al-Assad’s regime, and thus initially suggested the need for a clear, unified, rebel coalition that could engage the government both on the ground and on the negotiating table. This is no longer the case, as powerful groups have consolidated themselves and battle lines have been drawn not only between rebels and the regime, but among major rebel groups themselves. The diverse map of actors in the Syrian war today renders the regime/opposition binary, which is the platform for negotiations at Geneva III, outdated.

At present, and as all current maps of the war indicate, there are seven main military actors with the territory and power to affect change in the Syrian civil war: the Syrian government, the PYD, Ahrar al-Sham, Jaish al-Islam, the Free Syrian Army, ISIS and Jabhat al-Nusra.

Of the above, only three were present at the talks—and have yet to agree to talk to each other—the Syrian government; Jaish al-Islam; and the Free Syrian Army. The latter two are arguably the weakest of all the armed forces, but still capable enough to administer the areas they control. Granted that Jabhat al-Nusra, as an affiliate of al-Qaeda, and ISIS will never be accepted at the negotiating table, that leaves the PYD and Ahrar al-Sham crucially absent from the talks. Without the key viable actors present, what peace is being negotiated and how can it be expected that the current delegates in Geneva would be able to implement a deal over sufficient Syrian territory?

Opportunities are missed when the door to negotiations are slammed on those who seek it. Geneva III has already caused a rift within Ahrar al-Sham between moderates who advocate inclusion in the political process, and dismissive hardliners. Although Ahrar al-Sham’s Shura Council publically rejected the talks on December 10, its representative at the Riyadh conference, Labib Nahhas, proceeded to sign the HNC statement. Further emboldening the moderates within the group is the reported collapse of Ahrar al-Sham’s coalition with Jabhat al-Nusra. Tensions are rising between the two groups, which cooperated last year under the umbrella of Jaish al-Fatah, resulting in impressive gains in the country’s northwest. It was this offensive in March 2015 that prompted Russia’s direct intervention, which has focused its efforts on rolling back Jaish al-Fatah’s gains in the Latakia and Idlib provinces.

According to Reuters, leaders of Nusra and Ahrar al-Sham recently left a tense meeting on a proposed merger. Nusra had sought to bring Ahrar al-Sham into its fold, but the two disagreed on Nusra’s allegiance to al-Qaeda, which the affiliate refused to disavow at Ahrar al-Sham’s insistence. This should be welcome news to the United States and Russia as they look to weaken and ultimately destroy Nusra. Any such merger would have resulted in a major boost for al-Qaeda in Syria. To capitalize on such a development, organizers should include Ahrar al-Sham in the Geneva process, empowering its moderates who are ready for dialogue, and turning a potential adversary into an ally to defeat al-Qaeda’s Syria branch.

But including such actors requires a radically new approach to the Geneva talks. A more workable and realistic format would not have all actors sharing seats in a single opposition delegation, but rather representing their own factions at a roundtable—not too dissimilar from the several rounds of peace talks among warring factions during the Lebanese Civil War.

The entire notion of a peace process is that peace is negotiated between enemies party to a conflict. That nearly all actors, including foreign powers, reject the presence of their enemies at the table is not surprising, but all such requests should be dismissed by the U.N. conveners. The Syrian government, Russia and Iran continue to oppose any involvement of Ahrar al-Sham and Jaish al-Islam in talks. The latter, having made it to the table courtesy of Saudi insistence, has in turn rejected the inclusion of the PYD at the behest of their other regional backer, Turkey. Clearly, regional and international powers are angling for a political solution that best suits their own interests as well as those of their local proxies, rather than a genuine process aimed at reaching an inclusive compromise.

If a political solution is to be “Syrian-led,” as repeatedly stressed by the international community, then all key viable Syrian actors—with the obvious exclusion of al-Qaeda and ISIS—must have a seat at the table. The shared perception of a common enemy in al-Qaeda and ISIS suggests there is room for cooperation and a basis for which talks can be held. The platform for the Syrian peace process should be inclusive, not exclusive, to truly maximize the chances of a political solution, and that requires a seat for the PYD and Ahrar al-Sham at the table.