The Gulf states, the “deal of the century,” and the Iranian threat 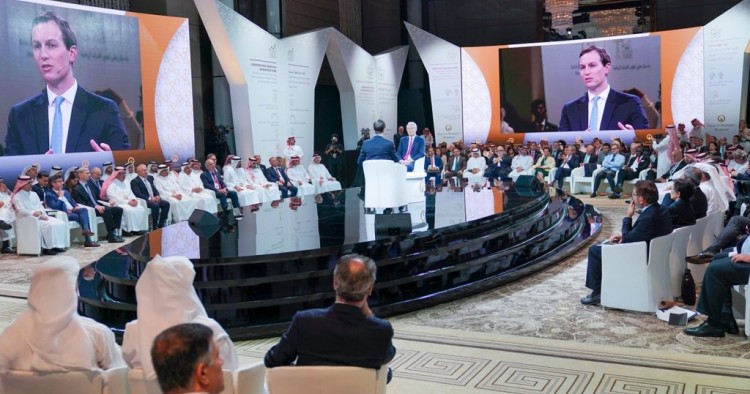 In recent months, the Israeli-Palestinian conflict has been the focus of renewed interest and attention, largely stemming from President Donald Trump’s promised “deal of the century” peace plan. Nearly two years after the idea first became public following Palestinian Authority (PA) President Mahmoud Abbas’ 2017 meeting with Trump at the UN General Assembly, the full details of the plan remain unclear. The economic elements were released in the run-up to the administration’s “economic workshop” in Bahrain in June, but the political components are still under wraps, and according to media reports, they may not be made public until after the Israeli elections in mid-September.

Many analysts have been dismissive of the plan’s prospects, but for Gulf states like Saudi Arabia, the UAE, and Bahrain, there’s at least one major reason to line up with Washington on the issue: Iran. While these countries seem interested in advancing the deal and appear willing to pay for it, it’s not clear whether they actually have the leverage to bring the two sides to the table. Despite the lack of optimism, they seem eager to do what they can, although this is driven more by a desire to curry favor with Washington and enhance their cooperation with Israel to counter Iran than anything else. Indeed, the Gulf states’ varying perceptions of the Iranian threat seem to be one of the major factors shaping their position on the Trump administration’s plan.

Where do the Gulf states stand?

The Gulf states can be divided into two main groups based on their approach to the initiative. Bahrain hosted the June “Peace to Prosperity Workshop” with the support of Saudi Arabia, which showed their agreement, at least in principle, to the plan. The UAE Ministry of Foreign Affairs laid out the Emirati position in a statement, saying, “The UAE supports all international efforts aimed at supporting economic progress and increasing opportunities in the region, and alleviating the suffering of people in the region, particularly our brothers in Palestine.”

By contrast, the Kuwaiti leadership decided to boycott the event, indicating its opposition to the proposed outline. As for Oman, one day after White House senior advisor Jared Kushner announced the date of the workshop, it put out a statement saying it planned to open an embassy in Ramallah. For its part, Qatar said that economic prosperity cannot be achieved without political solutions acceptable to the Palestinians.

At the heart of the divide between the two groups is the issue of Iran and the different perceptions of the threat it poses. For the UAE, Saudi Arabia, and Bahrain Iran is a major threat, and this has only been exacerbated by recent attacks on Gulf shipping and pipeline infrastructure thought to be carried out by the Islamic Republic or its proxies. This is not the case for Kuwait, Qatar, and Oman, however, and as a result they have less desire to deal with Iran and would prefer to remain focused on the long-standing Palestinian issue.

The Islamic Republic’s emergence as a common enemy has long driven closer Israel-Gulf ties, going as far back as the 1994 Israeli state visit to Oman. There is already limited cooperation between Israel and the Gulf states — although one can reasonably assume that at least some of it is not visible — but resolving the 70-year-old Israeli-Palestinian conflict could help strengthen that considerably. It would enable Israel and the Gulf states to present a unified front against Iran.

Iran has a particularly contentious relationship with the current U.S. administration and is acting more aggressively toward its neighbors, Israel, and the United States. Iranian-backed militias in Iraq, Syria, Lebanon, and Yemen are a growing concern for both Saudi Arabia and Israel. Recent events in the region have only increased the desire — and some would say the need — for cooperation between all countries threatened by Iran.

To tackle this challenge, the U.S., Israel, and the Gulf states have sought closer collaboration, in areas like intelligence sharing, economic monitoring, and presumably additional classified elements as well. Israel’s aim of loosening Iran’s growing hold over Syria is another shared interest, as neither the U.S. nor the Gulf states want to see a strengthened Iran dominant in Syria. The success of the U.S. peace initiative would allow the parties to build on this cooperation and expand it to additional fields.

On June 25, 2019, the Americans gathered international political and business leaders in Manama to discuss the economic part of the “deal of the century” and the promotion of an Israeli-Palestinian peace agreement. Key actors were missing, however. The PA boycotted the event, neither the Israelis nor the Palestinians were present at official levels, and only a few businessmen were in attendance.

Underlying the logic of ​​presenting the economic components of the plan before the political ones, according to the Trump administration, was the idea that laying out the economic benefits of peace would make it more likely that the Palestinians would come to the table. At the center of the plan is the establishment of a $50 billion investment fund, of which $28 billion would be invested in the West Bank and Gaza, and the rest in neighboring countries ($7.5 billion in Jordan, $9 billion in Egypt and $6.5 billion in Lebanon). The program deals with a variety of socio-economic issues such as health, law, education, employment, infrastructure, economic growth, and job creation.

Where do things go from here?

According to Kushner, the Trump administration is pleased with the way the workshop was conducted, but now must wait for the Israelis and the Palestinians to make progress toward joint talks. There has been no movement on that front since the workshop, however, and the main Gulf and Arab media coverage of the conference was pessimistic about the plan’s prospects.

The Trump administration, for its part, seems intent on moving forward. Kushner is set to travel to the region at the end of July, along with White House special envoy to the Middle East Jason Greenblatt and special envoy for Iran Brian Hook, to continue talks about the economic part of the plan, including the establishment of an multinational fund to support and oversee economic projects in Gaza and the West Bank, and will be stopping in Jordan, Egypt, Saudi Arabia, Qatar, and the UAE.

For now, the main Gulf states seem willing to keep talking, at least in the interest of their ties with Washington, but it remains to be seen if they will be able to convince the Palestinians to do the same. As for Israel, the deal hardly registers as a topic of discussion at the moment; the elections scheduled for mid-September are much more of a concern for both policymakers and the general public. Until the details of the political part of the plan are published, there will continue to be speculation about its content and the position of key Gulf states, so the follow-up from the Bahrain workshop will be a critical test of the way forward.

Facing a heightened threat from Iran, Saudi Arabia, the UAE, and Bahrain have a vested interest in supporting the Trump administration’s efforts to resolve the Israeli-Palestinian conflict, however long the odds of success might be. Even if the Palestinians hold firm in their opposition and the “deal of the century” comes up short, the Saudi-led bloc will have earned Washington’s favor and expanded their room for maneuver with the Palestinians, enabling them to move closer to Israel as they seek to confront their shared enemy and weather the current crisis in the Gulf.