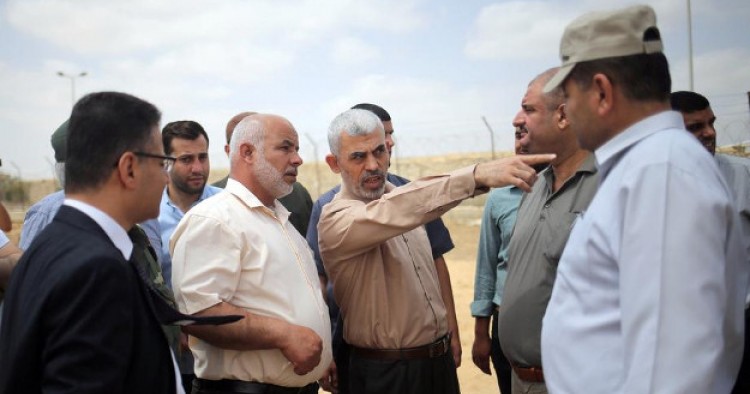 Jordan’s conspicuous silence over the unexpected trilateral rapprochement involving Hamas, Egypt, and former Fatah strongman Mohammad Dahlan does not mean that Amman is not keeping a close eye on recent developments. It is an unusual partnership that brings together once bitter foes, especially in the case of Dahlan and Hamas.

For Jordan, the fate of Gaza is linked to the future of the West Bank and the two-state solution that Amman strongly supports. Despite tense periods with Mahmoud Abbas, and frustration over his dithering and failure to end internal rifts within Fatah, Jordan continued to support the Palestinian leader. Amman was a member of the so-called Arab Quartet, including Egypt, Saudi Arabia, and the U.A.E., that sought to reconcile Dahlan and Abbas as a preliminary step toward ending inter-Palestinian rift.

But a recent reshuffle in Hamas’ leadership has changed the political dynamics in Gaza. Earlier this year, the head of the movement’s military wing, Yehya Sinwar, became the de facto prime minister of the Hamas-led government in Gaza. The 54-year-old leader was released in the 2011 Gilad Shalit deal between Hamas and Israel.

It was Sinwar’s election in February that triggered contacts with Egypt’s intelligence chiefs, and later with Dahlan’s lieutenants in Cairo. Hamas had altered its manifesto in May, where it accepted an independent Palestinian state on the June 4, 1967 borders, but without recognizing Israel.

It also broke historical ties with the Muslim Brotherhood. The move, while snubbed by Israel, is believed to have been taken to loosen political isolation and soften relations with Cairo. Since then, at least one meeting has taken place between Dahlan and Sinwar in Cairo. The latter also offered commitments to Egypt, including creating a buffer zone on Gaza’s side of the border with Sinai, and closing all underground tunnels. Egypt, on its part, began delivering much needed fuel to power Gaza’s only electricity plant, and promised to open the Rafah border crossing in both directions.

Egypt is reportedly mediating between Hamas and Israel to conclude a major prisoner swap that could include senior Fatah leader Marwan Barghouti. If this happens, it will be a major blow to Abbas, who has failed to convince Israel to release Palestinian prisoners—an issue of utmost importance to the Palestinian people.

Sinwar and Dahlan are said to have agreed to set up a joint committee to run Gaza, with Hamas focusing on security and local administration, and Dahlan’s group being responsible for external relations, including manning the border crossing. In addition, both sides agreed to create a fund to compensate families of those killed during the Hamas takeover of the Gaza Strip in 2007.

The majority of Palestinians believe Abbas had miscalculated by adopting a series of punitive measures against Gaza aimed at weakening Hamas. He initially slashed P.A. employee salaries in the Strip by half, then asked Israel to cut fuel supplies to Gaza, and more recently decided to retire thousands of P.A. staff associated with Hamas. These decisions weren’t welcomed by West Bankers, and they were especially denounced by economically embattled Gazans. If anything, they accelerated Hamas’ pivot toward Dahlan, but more dangerously, and this is what Jordan fears, the new reality could end up confirming the irreversible separate entity status of Gaza.

The recent Gulf spat has also played a part in hastening Hamas’ compromise with Egypt and Dahlan. Gaza has become a stage for a power struggle between Qatar, and the Egypt-Saudi Arabia-U.A.E. axis. This is one reason why Hamas did not feature on the list of terrorist organizations that Egypt and its Gulf partners had issued last month.

The new arrangement may work, at least for now, for Egypt, Hamas and Dahlan. Cairo wants to cut Qatar’s ties with Hamas and install security arrangements along the border with Gaza as it tries to quell the terrorist threat in northern Sinai. Hamas, on its part, wants to end its political isolation and break the economic stranglehold that Israel and Abbas had imposed.

It is not clear if Jordan was kept abreast of these developments by Egypt. Certainly “legitimizing” the separate status of Gaza weakens the already endangered two-state solution. Hardline Israeli officials have claimed repeatedly that there are two independent Palestinian states in existence—one in Gaza, and the other in Jordan.

To Jordan’s fears, a semi-autonomous Gaza opens the path to unilateral imposed arrangements by Israel regarding the future of the West Bank—Israeli control of the land with responsibility for the population assigned to Jordan through some sort of confederation. Amman could be pressured and enticed to accept such a deal. The caveats include giving up on Palestinian refugee rights, and awarding citizenships to most, which would upset Jordan’s current demographic balance.

All of these are considered existential threats to the kingdom, and they will be rejected by most Jordanians. Pundits here have referred to what the Trump administration and Israel could be working on discreetly as “the deal of the century”—one that promises to close the books on the Palestinian cause once and for all.

What that deal promises to deliver is not yet clear, but what’s happening in Gaza could be the tip of the iceberg.