Has Jordan Acquiesced to Assad Regime Offensive in Southern Syria? 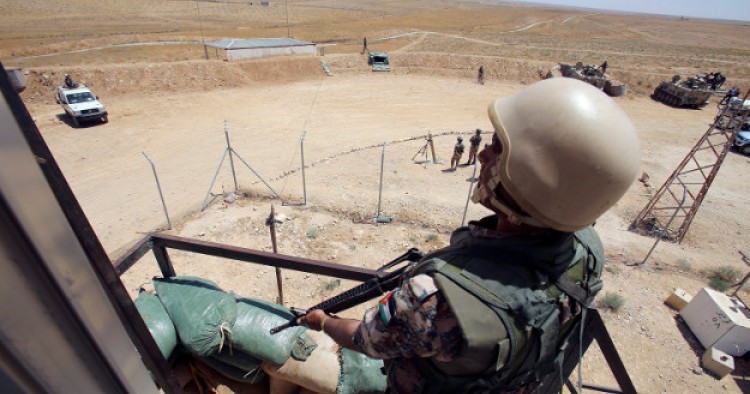 Jordan is yet to react publicly to a fresh land assault by Syrian regime forces, backed by Hezbollah and Iran’s Islamic Revolutionary Guard Corps fighters, against rebel-held towns in southern Syria. The land campaign was launched on December 28 with air support from Russian jets, and has been intensifying since. The governorate of Dara’a, and in particular the strategic town of Sheikh al-Maskeen, has been bombed by the Russian air force on a daily basis since the beginning of the year, in a bid to recapture territories from opposition forces in the south, along borders with Jordan, and in the southwest, close to the cease-fire lines with Israel.

The recent campaign aims at strengthening the bargaining position of the Damascus regime, and its Russian and Iranian allies, ahead of planned negotiations between the government and the opposition later this month.

Russia’s involvement in the campaign has raised questions about an earlier ‘understanding’ reached between King Abdullah of Jordan and President Vladimir Putin not to change the status quo in the south of Syria. The king had met Putin in Moscow on November 25, where it was reported that an agreement with the Kremlin was reached a month earlier to ensure “Russian bombing of targets in southern Syria, which borders the country, does not target Western-backed rebels known as the Southern Front—a grouping it supports as a buffer against the spread of hardline Islamist groups.”

That understanding was dubbed by Jordanian political analyst Mohammad Abu Rumman “a gentleman’s agreement.” He told this author that, according to that deal, Jordan had suspended the work of the Military Operations Command (MOC), an operations room staffed by Arab and Western military forces, including the United States, and “forced its biggest ally, the Southern Front, to halt all military actions.”

The Southern Front, which is largely made up of Free Syrian Army (FSA) fighters and other groups, including elements of Jabhat al-Nusra, had managed to push government forces back at least 30 miles to the north. Jordan has managed to build good working relations with the Southern Front in a bid to stem the flow of Syrian refugees and to create a buffer zone between the kingdom and Islamic State militants, also known as ISIS or Daesh.

The recent conflagration in Syria’s south may have triggered a fresh wave of refugees who are now stranded along the Jordan-Syria borders. Jordan’s State Minister for Information Mohammad al-Momani told AFP on January 11 that at least 16,000 Syrian refugees are now in make-shift camps near the border with Syria. Jordan has been criticized for not facilitating the passage of refugees, claiming that they have to go through security screening first.

Abu Rumman said that there are grounds for Jordan’s concerns regarding the latest military offensive in Dara’a. “There is clearly an Iranian-backed scheme to control southern Syria or at least the Houran plains, which could result in the fleeing of one million Syrians to Jordan,” he said. “Clearly this is a bold challenge to Jordan’s national security.” He added that Jordan’s silence reflects the state of confusion at the decision-making level.

But Sultan Hattab, a Jordanian political commentator, disagrees. He said that Jordan’s lack of response means that the kingdom has no problem with the government forces taking over the southern region. He said that “Jordan wants a safe zone in southern Syria and if the Syrian regime takes over then that goal will be met.” He added that such a development might even allow Syrian refugees in Jordan—numbering more than 1.5 million—to begin to return to Dara’a. “Jordan and Russia are coordinating and Amman must have been informed about the latest campaign,” Hattab said. The Russian intervention in Syria has changed Jordan’s perspective on developments inside that country, he added.

Fahd al-Khitan, a Jordanian political analyst, agreed with Hattab that Jordan and Russia are coordinating militarily, adding that Amman and Moscow “are in agreement over the future of southern Syria.” In his view, Jordan has no problem with the return of the regime to the south since “this could result in reconciliation between Amman and Damascus under Russian auspices.”Khitan added that Jordan must have received guarantees from Russia regarding possible changes in the balance of power in southern Syria.

But in spite of weeks of heavy bombing by Russia and bloody confrontations in Sheikh al-Maskeen, which lies on the Damascus-Amman highway, regime forces have not managed to expel opposition fighters or recapture the town. A spokesman for the Southern Front’s Seif al-Sham Brigades told the Financial Times on January 7 that southern Syria “was one of their last cards (MOC), the one area where there was still a functioning relationship between the rebels and the international community.”

Jordanian military expert Mazen al-Qadi blamed the Americans for “lacking a clear vision on Syria,” which has allowed the Russians to change the reality in southern Syria. He told the author that Jordan has managed its borders with Syria as best as it could—preventing the conflict from spreading into the kingdom and hosting hundreds of thousands of refugees at the same time. “But with the weakening of the U.S. position, which resulted in Washington halting weapons supplies from reaching the FSA, Jordan had to cope with such developments,” Qadi said. He said that the “rules of the game” have changed in Syria and it is Russia that is dictating the new rules.

The United States has not commented on the Russian-backed military offensive in southern Syria. King Abdullah, who is in Washington this week, has met with defense officials but news reports did not say if the latest developments in the south were discussed.

Abu Rumman said that Jordan’s perceptions of various aspects of the Syrian conflict have been pragmatic. “In all its dealings with the regime and some opposition groups, Amman maintained flexible relationships,” he said. “But all along it has kept a safety margin regarding its interests in southern Syria through alliances and understandings with the local community and the FSA. Now, with the latest offensives, such alliances and understandings are being tested,” he said.