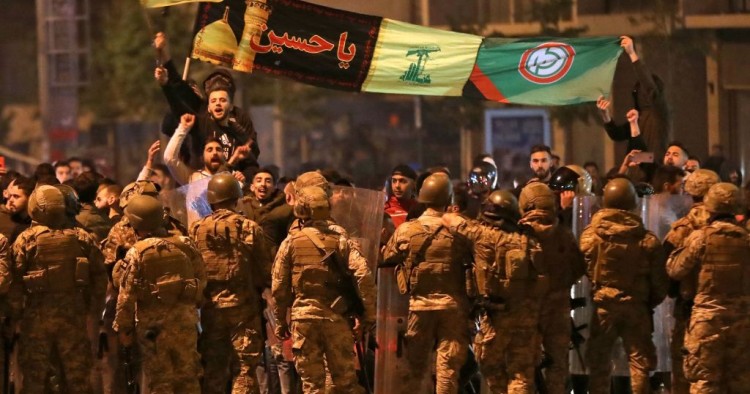 On Oct. 17, unprecedented nationwide protests began in Lebanon. After years of declining living standards, deteriorating public services, and mounting frustration with a nepotistic and self-serving ruling class, hundreds of thousands of citizens have taken to the streets, demanding an end to the country’s deeply entrenched sectarian system.

While Hezbollah has largely remained immune to criticism, owing to its widely perceived role as an effective resistance movement against Israeli aggression, the powerful Iran-backed Shi’a militia and political party is now viewed by many demonstrators as part of the corrupt and morally bankrupt political establishment that must be replaced.

Lebanon’s current political status quo is largely the result of a deal struck in 2006 between Hezbollah and Michel Aoun, who is now president. Aoun’s political party, the Free Patriotic Movement, has been handed over to his son-in-law, Gebran Bassil, who has been one of the protesters’ main targets. Hezbollah’s supporters have tried, time and again, to divert attention away from the political class and toward the Central Bank and its governor, Riad Salameh, blaming them for the country’s current economic and financial crisis.

Against this backdrop, supporters of Hezbollah and its Shi’a ally the Amal Movement have been quick to resort to violence. In recent weeks, they have attacked and intimidated demonstrators in various cities and, on multiple occasions during the first month of the protests, they rampaged through Downtown Beirut, beating protesters and setting temporary structures on fire.

Both groups continue using fear and violence to destabilize the protest movement. Alleging that the uprisings are part of a “foreign plot” against it, Hezbollah has leapt to the defense of Lebanon’s political establishment. Their violence has not just been limited to Beirut. They have attacked protesters in the Shi’a strongholds of Baalbek and Tyre as well.

This escalation in violence can be attributed to a number of factors, and threats by both groups to proceed along such a path come as little surprise to anyone familiar with their aims and objectives.

From the outset of the uprising, Hezbollah Secretary-General Hassan Nasrallah accused foreign powers of pulling the strings, even though a significant number of the group’s own supporters participated in the demonstrations. The protests in Lebanon coincided with those in Iraq and more recently in Iran. In Iraq, Reuters reported that Iran has intervened to slow the momentum of demonstrations targeting politicians backed by the Islamic Republic.

Nasrallah considers the protests in Lebanon to be an extension of a foreign plot that also involves the demonstrations in Baghdad and elsewhere in Iraq. Although it is clear that the protest movement in Lebanon is staunchly opposed to all forms of foreign intervention — including that of Saudi Arabia and Iran — Nasrallah has persisted in his efforts to convince Hezbollah supporters that the uprising aims to weaken the party.

Comments by U.S. officials, past and present, have also prompted reactions from Nasrallah and other high-ranking members of Hezbollah. As Naim Kassem, Nasrallah’s deputy, said during an interview on Nov. 22, the party is steadfast in its belief that Washington is deliberately impeding the formation of a new government in Lebanon.

Political bargaining over a new government

Following the resignation of Saad Hariri as prime minister on Oct. 29, Lebanon’s many political factions have failed to agree on a successor. While Hariri is the clear front-runner, he has said that he would not take the reins for a third time unless he is allowed to form a fully technocratic government, staffed by experts and free of career politicians. On Nov. 26, he withdrew his candidacy.

However, Hezbollah has vehemently rejected the idea of naming technocrats as its representatives in any future cabinet, despite Parliament Speaker Nabih Berri’s Amal Movement reportedly agreeing to do so. Sources within the party say there is no way they will give up “in times of peace, what we did not give up in times of war,” alluding to the July 2006 War between Hezbollah and Israel, during which attempts to eliminate the party’s guerrilla army failed.

Since its inception in 1982, Hezbollah has slowly increased its influence and participation in Lebanese politics. This process reached a peak during Hariri’s most recent government, within which the party had an unprecedented three ministers, alongside an equal number from the Amal Movement.

Now, as the protests enter their second month, thousands of people on Lebanon’s streets are demanding an independent government without any direct representatives of political parties — including Hezbollah. Accordingly, the recent and increasing violence, from which the two Shi’a parties have done nothing to distance themselves, is being deployed to mitigate pressure for change. Certainly, if there is less opposition on the streets of Beirut, and particularly in the Shi’a strongholds of south Lebanon and Baalbek, this will strengthen Hezbollah and Amal’s argument that their constituents are not all opposed to their presence in government.

In Beirut, Hezbollah supporters are spearheading counter-protests and pledging allegiance to Nasrallah. Amal is taking a similar approach, demanding that Berri not be targeted in chants or slogans. However, in Tyre and near Berri’s hometown of Tibnin, opposition has resurfaced after protesters were silenced by Amal henchmen in the early stages of the uprising.

Lebanon is currently one of the world’s most indebted countries, plagued by stagnant growth and high unemployment, and its already bleak fiscal and economic outlook continues to deteriorate. As the situation worsens and it appears more likely that President Aoun will call for binding parliamentary consultations to choose the next prime minister, Hezbollah and Amal will look to minimize widespread criticism against them to strengthen their position in government. Aoun has called for consultations to take place on Dec. 9.

Maintaining a duopoly of the Shi’a base

Unconfirmed but widely circulated reports suggest that death threats are being sent to Shi’a residents in various parts of the country participating in the protests and criticizing Hezbollah.

The groups are making a concerted effort to shore up support by reminding their constituents of the Israeli threat and its occupation of Lebanese territory. They are also to trying to convince supporters that pro-Saudi figures such as Samir Geagea — leader of the Lebanese Forces, a Christian party and key member of the political bloc opposed to Hezbollah and Amal — are also behind the uprising. Chants accusing Geagea of being a Zionist are common among Hezbollah and Amal supporters.

Both Shi’a groups are using the threat posed by Israel and claims that their opponents are in league with it to convince their constituents that the alternatives to them are worse.

Despite this, there is continued frustration and a growing belief among the Shi’a community that this argument will not work anymore. Protesters have repeatedly said that their demands are not directed at Hezbollah’s resistance to Israel, and many, both Shi’a and non-Shi’a alike, have clearly stated that they are against Israel. Yet, Hezbollah’s continuous use of violence against peaceful protesters is turning a growing number of sympathizers against the party.

The idea that an effective anti-Israeli stance can be taken without pledging allegiance to Hezbollah represents a grave threat to Iran’s influence in Lebanon — as well as that of Hezbollah itself. As Lebanese Shi’a see their coreligionists in Iran and Iraq protesting against Tehran’s theocratic regime, this will likely intensify Hezbollah’s use of fear and violence against its constituents. After all, making concessions to protesters, of whatever sect, would show that popular pressure can be exerted upon Hezbollah and ultimately weaken the party.

The Amal Movement, meanwhile, needs Hezbollah to maintain the two parties’ long-time political stranglehold on the Shi’a community. While Hezbollah supporters were reportedly initially among those protesting against Berri in south Lebanon, as the threat to both parties has become more apparent, their interests have converged. This means that their tactical shift toward street-level violence is likely to intensify if no political solution is reached soon.

And as this threat continues, all options are on the table for Hezbollah as per orders from Iran and what it sees as an expanding foreign plot against the “axis of resistance.”

Joseph Haboush is a Non-resident Scholar at MEI, the Lebanon and Online Desk Editor at The Daily Star, and a Middle East reporter for The Telegraph. The views expressed in this article are his own.