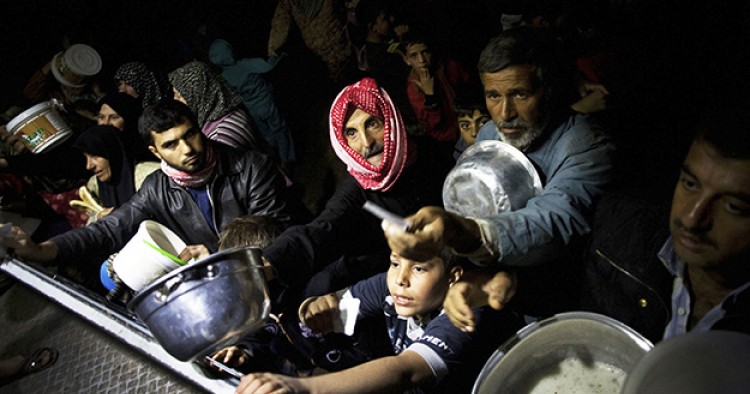 For decades, the idea of nongovernmental organizations (NGOs) in Syria had been a non-starter. Security services that were as efficient as they were invasive made sure that all areas of society were kept in check; organizations had to register every activity with the Ministry of Social Affairs and Labor.

In the first years of Bashar al-Assad’s presidency, in the early 2000s, the door opened up for civil society groups before being shut again, a period known as the “Damascus Spring.” This brief time was exemplified by private forums, such as one led by parliamentarian Riad Seif that discussed human rights, among other topics, and public statements, such as one by 99 Syrian public intellectuals that called for a freer and more just society. But the Assad regime grew uneasy about allowing such freedom of expression. Several activists were thrown in jail as burgeoning civil society organizations were seen as a threat to the regime, and in 2001 Minister of Information Adnan Omran labeled civil society “an American term.” From this time until the uprising and conflict, civil society organizations either worked underground or operated under the patronage of officials or figures such as Asma al-Assad, the president’s wife.

Now in the throes of violence and chaos, the central government has lost significant control over territory inside Syria, and as a result more space has again opened up for civil society organizations—both political and apolitical. These organizations, perhaps one of the only silver linings in the current situation, are helping the Syria of today to survive and are preparing to rebuild the Syria of tomorrow.

Humanitarian organizations working inside Syria usually try to remain apolitical. Walid Hafez, president of Aid All Syrians, notes that “in order to continue to do work, it is necessary to not get involved in politics. Otherwise, it might endanger your life.” Aid All Syrians has built two schools in the suburbs of Idlib and has opened eight clinics, including a maternity clinic, a pediatric clinic, and a dental clinic. “We employ local Syrian workers, and we use materials from Syria in order to stimulate the economy,” Hafez says.

The work of such groups in Syria proper is often done independently of international institutions, as it takes place in areas that are controlled by organizations like the Islamic State (ISIS), where Western governments have cut off aid. One such case is in northern Syria, where a hospital in an area controlled by ISIS needs $70,000 per month to operate. It is now about to close due to the area being inaccessible to funding from Western governments.

In such situations, local groups are coming up with ingenious strategies to protect citizens. Under intense shelling and a regime blockade, a women’s group in Eastern Ghouta, a suburb of Damascus, had to find a way to halt the starvation of people in the community. The regime was only allowing eggs into the area, not chickens, and so the women figured out how to incubate and hatch the eggs. Through this scheme, they were able to provide a more sustainable food source, independent of military developments.

Protection of citizens can even extend to those who have fought for the Syrian regime. In the village of Khirbet al-Jouz, near Idlib, government forces torched and looted every home. When local police captured and imprisoned the soldiers, the villagers shared their food with them, allowing those among them who hadn’t fired a shot to leave unimpeded. Those responsible for much of the wanton looting were held until they could be tried in a local civilian court. The Syrian Emergency Task Force (SETF) helped get funding to the newly liberated village. Electricity and infrastructure such as hospitals were restored not long after the villagers had returned.

As executive director of SETF, Mouaz Moustafa has seen how important local administrators have also been in staving off the proliferation of radical groups across the country: “Local civil society groups get a lot of respect from armed groups, and local councils are able to check military advances as they’re needed for local administrations.” The local councils are able to uphold civilian rule, as many military organizations do not have the ability to administer the territories they take over.

Politics for the Future

While many Syrian civil society organizations currently work outside of politics and principally on alleviating the suffering of Syrians both within and beyond the country’s borders, some are taking on the task of organizing for a post-war political future. Rafif Jouejati, director of the Foundation to Restore Equality and Education in Syria (FREE-Syria), spent the last few weeks of May promoting the Freedom Charter in Turkey and Europe. The result of interviews with over 50,000 Syrians, the charter calls for broad freedoms such as equality and democracy, and the organization hopes that it will be used as the basis of a future Syrian constitution.

The Day After (TDA) project is another example of an organization that is actively engaged in politics. TDA has worked closely with international organizations such as the Washington, D.C.-based United States Institute for Peace. According to TDA’s executive director, Wael Sawah, the organization has been digitizing hundreds of thousands of property records over the past three years in order to help protect Syrians’ property rights. Throughout Syria, TDA disseminates field guides to educate Syrians about the ideas of transitional justice, rule of law, the role of civil society, elections, and the role of the judiciary—all of which the organization hopes will be used effectively in Syria’s future.

NGOs have been as active as they have been necessary in Syria ever since Assad’s grip on the country was lessened in 2011. In areas outside of government control, these civil society groups have been absolutely vital. The examples in this article show the range of activities and operations that Syrians are carrying out, but they are not intended to be a representative sample. They do, however, reflect the importance of Syrian civil society voices.

Though Syrian civil society is expanding dramatically in an intensely restricted space, voices from the sector are often marginalized. According to Jouejati, the reason is because “weapons speak louder than words; military might is seen as more important.” Jouejati also expresses a common concern about political organizations such as the National Coalition of Syrian Revolution and Opposition Forces, known as ETILAF from the Arabic word for coalition.  “Politicians don’t understand that civil society is more than bake sales,” she says, implying that ETILAF doesn’t recognize the importance of civil society to a stable democracy. But she believes in civil society’s power to bring about positive change all the same: “Civil society will be the basis of a new Syria.”