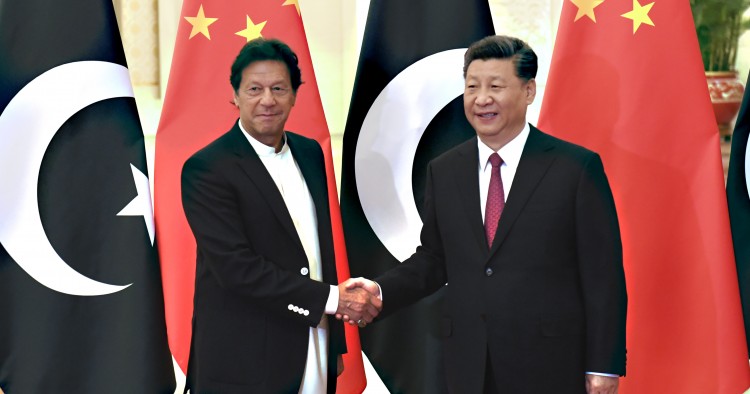 Pakistan's Prime Minister Imran Khan recently revealed that several countries are pressuring Islamabad to follow in the footsteps of the Gulf states by recognizing the state of Israel. Khan, however, expressed opposition to this idea, at least until there is a political settlement that meets Palestinian demands. While full normalization between Israel and Pakistan may still be out of reach, China could mediate between these two countries, which have never established a diplomatic relationship.

A glance at the history of interactions between Israel and Pakistan might suggest that they could easily normalize relations. Admittedly, there has been political hostility between them since the establishment of the State of Israel in 1948, given Pakistan’s ties to Arab countries. Nonetheless, the two countries were able to establish direct political contacts on several occasions during the 1990s and early 2000s, as the Oslo Accords and the establishment of the Palestinian Authority partially destigmatized Israel. Informal contacts have reached the highest levels of power. For example, in 2005, Israeli Prime Minister Ariel Sharon and Pakistani President Pervez Musharraf shook hands at the United Nations summit. Furthermore, several reports indicate cooperation between the intelligence bodies of both countries.

The main reason for tensions is ideological and cultural, rather than geopolitical. Pakistan and Israel have never fought each other, there is no geographical dispute between them, and both are interested in fighting extremism. Prime Minister Khan's statement notwithstanding, Pakistan appears ready to build some form of relationship with the state of Israel.

But a bilateral relationship does not mean full-blown normalization. A deeper look at the dynamic between Pakistan and Israel reveals deep rifts that are likely to prevent open diplomatic relations in the near, or even distant, future.

There are several obstacles to normalization. One is the growing number of religious extremists in Pakistani society and the outsized influence of military leaders who want to preserve their strength by supporting the Muslim clerics. These clerics vehemently oppose any relations with the Jewish state.[1] Such a situation has led to a significant increase in anti-Israel sentiment in Pakistan, which discourages the Pakistani government from publicizing its political relations with Israel.[2]

At the same time, Pakistan has many motives for normalizing with Israel.  In recent years, there has been unprecedented collaboration between India and Israel, manifested in part by extraordinary Israeli security assistance to India. Pakistan interprets any assistance to India as ultimately directed against itself. If the vow of one high-ranking official to “defend the homeland” is to be believed, Islamabad will not hesitate to react. If, however, Pakistan were to take steps towards normalization, Israel may be less inclined to work closely with India.

Another incentive for Pakistan is a possible improvement in its relationship with the U.S. Key positions in the Biden administration have gone to individuals who sympathize with Israel, such as Anthony Blinken, who has been named Secretary of State. If Pakistan normalized with Israel, it would show a willingness to cooperate with an important U.S. ally. As of now, American intelligence and military officers harbor certain suspicions about Pakistan, many of which are related to its nuclear program. Pakistan’s nuclear program also cast a long shadow over the its relationship with Israel.

Pakistan developed its nuclear program, which includes launching capabilities, in response to that of its archrival India. In so doing, Pakistan became the first Muslim-majority country to have proven nuclear capabilities.

Another troubling issue from Israel’s standpoint are the 2003 revelations about Abd al-Qadir Khan, the  “father” of the Pakistani nuclear program, who admitted to selling nuclear materials and expertise to the highest bidder.

Pakistan sees itself as standing in Israel’s crosshairs, an impression that has been reinforced by Israel-India cooperation. Some in Islamabad fear that Israel could attack independently or assist India in attacking nuclear system sites in an attempt to "deprive" Pakistan of its capabilities.[3]  This fear could be allayed through a normalization of relations.

In addition, international concerns about the true state of Pakistan’s nuclear program are intensifying. Pakistan continues to develop its nuclear capabilities, with an emphasis on second strike capability. Additionally, it is developing nuclear devices for tactical purposes and missiles for its nuclear devices that can reach far beyond India’s territory.

Pakistan's economic situation, increased terrorist activity and reports of religious radicalization among senior officers (who hold the nuclear trigger), increases the need to create “a communication channel” between Israel and Pakistan. The primary purpose of a reliable channel of communication would be to increase transparency and to prevent misunderstandings that could lead to a break-down of relations.

Ostensibly, Israel’s rapprochement with the Gulf states, notably Saudi Arabia, was supposed to create an opening to establish such a channel. But Riyadh and Islamabad's relations have reached an unprecedented low for a variety of reasons, notably Saudi Arabia’s lack of vocal support for Islamabad on Kashmir and Pakistan's rapprochement with Iran. These developments have raised doubts about whether Saudi Arabia (and its allies in the region) could mediate between Israel and Pakistan. It is also doubtful that the United States could be the mediator, given deep suspicions in Islamabad of Washington's motives, suspicions that only deepened during President Trump's term.

Beijing as the communication link

A country that could effectively fulfill this mediatory role is Pakistan's neighbor China. This is because China maintains a close relationship with both Israel (despite the difficulties on the US-Israel-China axis) and Pakistan, which economically depends on China.  With its clear interest in stability for the sake of economic growth, China can serve as a fair and stable mediator between Israel and Pakistan. As such, China has the power to help the parties avoid an unnecessary escalation that could undermine stability in Asia and beyond.

China’s Belt and Road Initiative (BRI), which seeks to increase trade and transport connectivity throughout Eurasia, has made the Middle East and Pakistan central to China’s global strategy. Historically, the Middle East has served as an important market and thoroughfare for global trade, and the BRI is continuing in this tradition of the Silk Road. In light of the BRI, China’s interests in the region include not only the safe and reliable flow of oil but also the geopolitical stability needed to develop projects both on land and at sea.

Israel and Pakistan are key components of the BRI. The initiative could strengthen the role that Chinese firms play in the Israeli economy, potentially leading to infrastructure development as well as increased Israeli consumption of Chinese goods. China would like to defend its investments in Israel and drive a wedge between Israel and the U.S.

Given its interests, China wants Israel to be protected from hostile neighbors. If Pakistan were to normalize with Israel, that would signal to Tehran an unwillingness to back Iranian escalation with Tel Aviv. Given Pakistan and Iran’s developing relationship, such a signal might restrain Tehran in a way that serves China’s ends.

Pakistan has a long and fruitful relationship with China and its strategic location makes it an important link in the BRI. Pakistan’s internal instability and desire to lessen its dependence on the U.S. makes it receptive to both political and economic overtures from China. Pakistan also serves China’s interests by keeping India occupied with defending its northwestern border, rather than its contested border with China.

Furthermore, helping to build stable Israel-Pakistan relations will burnish China’s reputation as an international mediator. In the aftermath of U.S.-mediated normalization agreements between Israel and Bahrain, the UAE and Sudan, China is likely hoping to make its own mark in the field of Middle East peace.

On balance, it appears that the impetus for better relations between Israel and Pakistan might not come from the Gulf countries, despite their recent wave of normalization agreements with Israel. It seems instead that only China can "step in" to open up communications. If successful, China's could bolster its peaceful image in Asia while also furthering its geopolitical and economic goals.

Danny Citrinowicz is a senior research fellow at the Abba Eban Institute for International Diplomacy in Israel. He has served for 25 years in a variety of command positions units in Israel Defense Intelligence (IDI), reaching the rank of major. Roie Yellinek is a non-resident scholar at the Middle East Institute, a Ph.D. student at Bar-Ilan University in Ramat-Gan (Israel), and a doctoral researcher at the Begin-Sadat Center for Strategic Studies.  The views expressed in this piece are their own.