How did China Win Over the Israeli People? 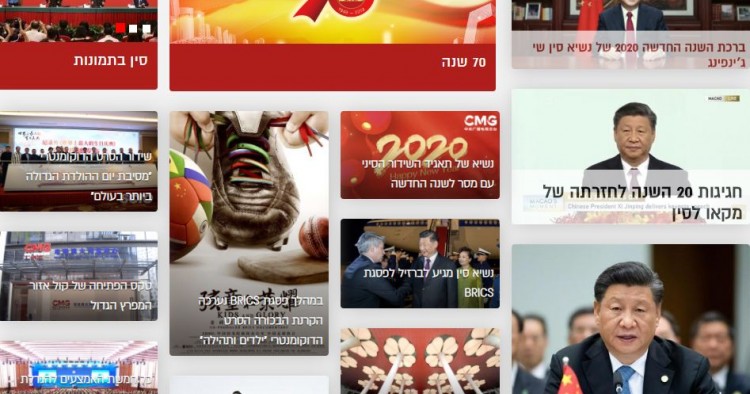 On September 30, 2019, the Pew Research Center published the results of its Global Attitudes survey, with one of the sections title, “International Opinions of China divided.” According to that poll, the Israeli public sees China in a favorable way — and only in Russia and Nigeria does China get a more sympathetic audience. Given the wide scope of consistent Chinese efforts to appeal to Israeli public opinion in recent years, the results of the survey are hardly astonishing, and in fact indicate that China’s endeavor to curry favor with Israelis has succeeded.

The results of the Pew survey, which are divided into “favorable” and “unfavorable,” are for the most part not surprising. On one side are the Japanese, where 85% see China as unfavorable and 14% as favorable. On the other side are Russians, 71% of whom view China favorably and only 18% unfavorably. Of the 28 other countries surveyed, whose favorability / unfavorability scores are distributed unevenly between these two ends of the spectrum, Israel lies much closer to those registering the highest favorability (e.g., Nigeria and Russia) than those (mostly Western) countries with which it self-identifies yet that regard China very unfavorably.

These results beg the question, why and how did China succeed in generating such favorable attitudes from the Israeli public? The result of the recent survey is all the more intriguing in that it shows an 11% increase in China’s favorability in Israel over the previous survey conducted in 2018. A possible answer to this question is China’s considerable financial investment and infrastructure building in Israel. This explanation is also the reason why the “Chinese issue” has received widespread media attention in Israel. The media spotlight on China in Israel, it is important to note, has not necessarily been positive, and sometimes has even bordered on Sinophobia.[1]

Another possible answer could be the impression China’s transformation from a failed state to a superpower within a few decades has made on Israelis. But that does not seem to be an adequate answer either. Yet, this explanation too is wanting. After all, China’s emergence as a superpower and peer competitor of the United States, can also raise concerns among Israelis and thus as easily evoke negative as positive feelings toward China.

The explanation for how China is gaining a positive public opinion in Israel — unlike in the majority of Western countries — is due to the successful deployment of China’s “soft power” toward the Israeli public.[2] It is interesting to note that Lao Tzŭ, China’s great 6th century philosopher used the idea of ‘indirect’ and ‘soft’ influence.[3] He argued that a superior leader is not the one whose subjects do what they are command to do but the one whose subjects are persuaded to serve his purposes without necessarily even knowing of his existence. In what ways has China applied the lessons imparted by Lao Tzŭ in cultivating Isralei public opinion?

Between 2004 and 2007, China-Israel bilateral trade surged from $2.4 billion to more than $5.3 billion.[4] It was during this period that Chinese soft power was deployed in Israel. In 2007, the Chinese established the first Confucius Institute in Israel at Tel Aviv University.[5] Eight years later, a second Confucius Institute was established, on the Mount Scopus campus of the Hebrew University of Jerusalem.[6]

These institutes are operated by Hanban, a non-governmental organization (NGO) working through the Chinese Ministry of Education, and operating through the Asian Studies departments at universities. Ambiguity regarding the nature of the arrangement between Hanban and the universities can sometimes create uncertainty as to which of the entities exercises authority over the operations of the institutes. The institutes offer classes, courses, events and various activities related aimed at exposing Israelis to Chinese language and culture in the form and manner requested by the Chinese Ministry of Education.

In September 2009, the Chinese state-owned broadcaster China International Radio (CRI) launched a Hebrew-language division designed to allow it to appeal directly to the Israeli public, without mediating local media, which may be affected by other values or interests. CRI’s Hebrew-language service publishes a website some of whose video content has gone viral.[7] The Hebrew service’s presenter, Xi Xiaoqi (better known as “Itzik Hasini,” or Itzik the Chinese) speaks the language fluently.[8] Presenting the news and feature stories in the Israeli audience’s mother tongue serves the purpose of transmitting official Chinese views unobtrusively and gracefully.

In November 2017, the Chinese government continued its mission to appeal to the Israeli public and set up — with considerable investment — the China Cultural Center at Ramat Hahayal in Tel Aviv. When asked to explain the rationale for establishing the Center, especially in a country as small as the State of Israel, China’s Cultural Attaché, Wan Ting, responded:

The decision is part of an overall strategy of the Republic, whereby Chinese culture should be made accessible in all countries where it has strategic, diplomatic or economic ties. Although there are larger states in terms of a number of residents, Israel is seen by us as a state of special status and the decision to establish a cultural center here indicates our desire to invest in cultivating cultural ties in Israel.[9]

The Center also offers courses, exhibitions and workshops in a variety of Chinese cultural fields.[10] Although some of the China Cultural Center’s activities are similar to those conducted by Confucius Institutes, its target audience is different: it appeals to the general Israeli public and offers a positive worldview of China.

The Chinese Embassy in Israel made an indirect appeal to shape the consciousness of Israeli public opinion leaders, and in turn to shape public attitudes, when in December 2018, it established the Chinese Association of Chinese Sinologists and Translators.[11] While there are many societies in Israel that are home to scholars of a particular area or field, this is the first time that a country’s official representatives have set up an association charged with investigating, visiting, and discussing issues pertaining to the place. The Association, which has not (yet) published any activities it has organized, can be regarded as intended either to support research in Israel regarding China, or to help suppress research that addresses issues the Chinese government does not want to be investigated or remembered (e.g., anything related to Tibet, Uighurs, Taiwan, etc.)

Taken together, these Chinese soft power initiatives in Israel paint an overall picture of a strong desire to influence public opinion. The results of the recent Pew survey suggest that Chinese soft power activities have been quite successful. However, what is less clear is why China has committed so much attention and resources to this effort. One possibility is that Chinese officials seek to generate favorable attitudes among the Israeli public mainly as a means of advancing their economic interests. However, this explanation is wanting. China trades and manages economic relationships with many other countries, but it does not employ as many soft tools as it has in the case of Israel, especially in the last five years.

Perhaps a more likely reason is that the Chinese leadership regards its campaign to win over the Israeli public as part of its strategic rivalry with the United States, which has intensified during the Trump administration.

A complementary explanation is China’s fear of a “domino effect.” This effect may occur if a Western country such as Israel will begin to consider the extent of any new Chinese involvement in the country, which may drag additional states and bodies, to do so what may hurt the growth and expansion of China in the next years.

It is imperative to emphasize: the Chinese growth and expansion are not necessarily a threat or problem and as more people around the globe are given more decent living conditions — as many in China are privileged to have due to the Chinese growth in the past three decades — the better it will be.

But it is in the interest of the State of Israel to carefully examine Chinese soft- and hard-power activities, to explore the full range of possible motivations for their deployment, and to discuss their implications in the most open and candid manner. Thereafter, the Israeli authorities could, and should develop an overall strategy to address these activities, in cooperation with countries with which Israel shares common values and worldviews such as the United States.

[2] Soft power is a term in international relations, conceived by Joseph Nye, which describes a situation in which a country in the international system impacts another country in a non-powerful way, thereby achieving different goals in foreign policy.

[6] The Confucius Instute at the Hebrew University of Jerusalem,, http://confucius-huji.co.il/confucius-institute-at-the-hebrew-university/.