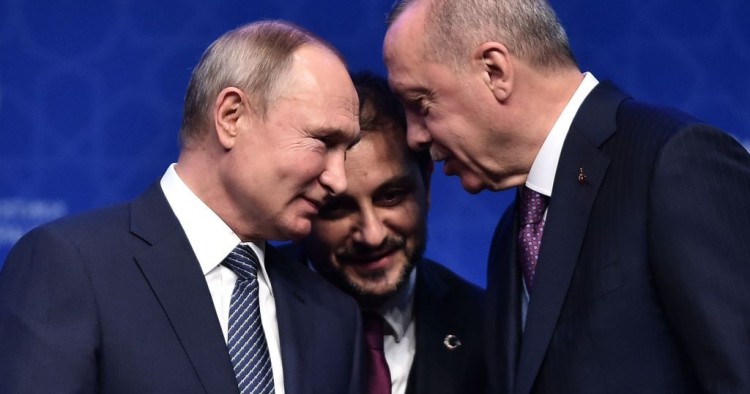 The Berlin Conference on Libya will be a crucial test of whether Europe can act on its ambitions.

The conflict in oil-rich Libya has escalated in the last few weeks in tandem with an intensification of diplomacy by external stakeholders. By organizing a mini-summit in Moscow between the two sides of the conflict, Russian President Vladimir Putin moved closer to dominating the diplomatic landscape on Libya. In doing so, Moscow has effectively sidelined Europe while at the same time trying to enlist European support for its own efforts. Russia’s success in injecting itself into the diplomacy over Libya is partly due to its partnership with Turkey, which is the only significant military backer of the Tripoli-based, UN-backed Government of National Accord (GNA).

This weekend, Angela Merkel is convening a high-powered summit to try to re-establish European influence on the process. The hoped-for guest list comprises leaders of the UK, France, Russia, and Turkey, as well as U.S. Secretary of State Mike Pompeo and representatives from a wide range of stakeholders including the UN and the African Union — along with the leaders of both Libyan factions. This is a serious test of whether Europe can live up to its desire to more strongly assert its interests abroad.

On the ground, the self-styled Libyan National Army (LNA), based in the east and commanded by Khalifa Hifter, has been on the offensive since Dec. 12. Libyan sources close to the GNA, on the one hand, report divisions and tensions among the groups that make up the Tripoli-based government's military forces, including between the RADA Special Deterrence Forces and Tripoli Revolutionary Brigade. Sources close to the LNA, on the other hand, claim that their influence is increasing with senior former Gadhafi officials, including the head of Gadhafi-era external intelligence Abuzed Omar Dorda, who has extended his support to Hifter. As a result of the changing balance of power, Hifter's forces made inroads into Tripoli and captured the strategic town of Sirte, without facing much resistance. As a result, Hifter was reluctant to sign off on the cease-fire, which began on the 12th and collapsed a few days later.

Hifter's push galvanized the governments of Italy, Germany, and Turkey into action. While Italy reached out to Tunisia and hosted conflicting factions in a summit in Rome, Germany invited Algeria to attend the upcoming Berlin Conference and German Chancellor Merkel travelled to Moscow to discuss Russia’s diplomatic efforts. For his part, Turkish President Recep Tayyip Erdogan got an authorization from the Turkish parliament to deploy troops to Libya. Ankara has already transferred a contingent of Turkish soldiers as well as Islamist mercenaries from Syria's Idlib Province to Libya to help the GNA fight back against Hifter's forces.

In sidelining Europe in its own backyard, Russia and Turkey benefited from the political void left by European indecisiveness and inaction, as well as the conflicting agendas of different European states, especially France and Italy. Increased militarization of the crisis and the fact that both Russia and especially Turkey started intervening in the conflict boosted their influence over the political processes as well. Turkey has mainly sent Turkish troops, military advisers, armed drones, armored vehicles, and pro-Turkish Syrian Islamist militias as mercenaries to Libya. Sources close to the GNA on the ground say that the most effective help provided by Turkey are the advisers, who train and advise on planning, operations, tactics, vehicle operations, and directing GNA forces on the battlefield. Some sources within the GNA also say that the Turkish advisers, possibly civilian, are giving the GNA fighters Islamic ideological training as well.

The GNA is paying for provision of these services, and the primary beneficiaries are those close to President Erdogan. The Turkish armed drones sold to Libya are produced by a company owned by President Erdogan's son-in-law, Selcuk Bayraktar, and many of the armored vehicles have come from BMC, a company owned by a close associate of the president. A Turkish private security firm called SADAT is also active and has both advisers and fighters in Libya. The firm was established and is currently run by Adnan Tanriverdi, a former adviser to President Erdogan, who resigned from his post on Jan. 8 “to protect Erdogan's name.”

Turkey is keen to support the GNA for three main reasons. First is to break Turkey’s isolation in the Mediterranean and gain Libyan support for Turkey’s claims to rich natural gas deposits. The GNA recently signed a highly contested maritime border delineation deal with Turkey. Second is that Turkey doesn’t want to lose a rare Arab ally, given that Ankara’s relations with most Arab states, with the exception of Qatar, are currently not very friendly. The third reason is related to the economy: Turkish companies are still owed billions in debts that date back to the Gadhafi era before the beginning of Libya's nine-year civil war. President Erdogan recently struck a deal with the GNA to pay $2.7 billion in compensation for that debt. Turkey could also grab lucrative gas and oil contracts if Ankara continues to have influence over a future Libya government.

Ankara doesn't have the capacity to up the ante too much to prevent the advances of Hifter’s forces, however. Ankara's aim in Libya is to maintain the status quo, which could result in a permanent division of the country into two parallel administrations.

Russia's most significant intervention in Libya is also in the form of a private security firm, namely the Wagner Group, which fights on the battlefield on the side of Hifter's forces. The group is believed to be led by Yevgeny Prigozhin, a Russian oligarch known as “Putin's chef” due to his success in the catering business.

Although there are significant differences between the Syrian and Libyan theatres, what Russia and Turkey are implementing in Libya is a working model that was developed and tested in Syria. In Syria, as in Libya, Ankara and Moscow back opposing forces and have set up political platforms in which they represent the opposing forces — either independent forces or their proxies on the ground. As part of the Astana Process, the Kremlin was able to get the Assad regime to agree that Turkey will represent the Syrian rebels in negotiations as a guarantor. The setup helped Russia to utilize Turkey as a facilitator of its power projection in Syria and helped Turkey to prevent the Kurdish-led administrations from having any say in international processes regarding a political settlement of the Syrian crisis.

In Libya, however, Moscow has so far failed to push Hifter to accept Turkey as an international mediator. The military imbalance in favor of the LNA in Libya also makes Hifter reluctant to accept a prolonged cease-fire. The fact that Russia is just one of the external powers that Hifter counts on for support makes it difficult for Moscow to dictate the terms. Hifter's forces also receive military support from Egypt and the UAE, as well as political support from France and an endorsement from President Donald Trump.

At the forefront of European diplomacy on Libya are three countries: France, Italy, and Germany. Both France and Italy are able to speak to both warring parties but have so far failed to bring them to an agreement. Germany, for its part, is leading the efforts to organize a major conference on Libya, aiming to bring together not only the conflicting Libyan factions but also neighboring countries and other external stakeholders. Trying to make up for its lack of influence on the ground, Berlin is casting a wide net when it comes to participants, with the Greek government the most recent to express an interest in joining. Wide participation could well dilute the efforts and reduce the effectiveness of the conference, however.

Libya is essential for Europe for at least three main reasons: security, immigration, and energy resources. On the security front, Libya is currently a major hub for jihadist terrorist groups. According to sources on the ground, Libya constitutes a major platform for al-Qaeda in the Islamic Maghreb (AQIM), with just short of half of all AQIM militants based in the country. The rest of the group is distributed between Mali, Algeria, Mauritania, Tunisia, and Niger. Most of the other smaller jihadist groups operate in areas controlled by the GNA. Although both the GNA and LNA target ISIS fighters, there aren't any significant operations against AQIM. Concerning immigration, Libya is a primary gateway of a massive African migration route that extends from the continent to Europe. Continuation or escalation of the instability in the country could lead to a new wave of refugees into Europe, posing a significant political risk. Libya is also a major energy producer with underexploited resources. Given the current situation, the country is a heaven for fuel smuggling. Although the Libyan energy industry prefers to work with European energy companies, this could change if Russia cements its role as a future power broker in the country.

Russia and Turkey have established their influence in Europe’s backyard by being willing to commit military assets. This weekend’s summit in Berlin represents an attempt by Europe and its close allies to respond using their diplomatic strength. A crucial indicator will be whether Europe manages to put in place an embargo on anyone sending more weapons to Libya. The outcome will echo far beyond Tripoli.

A non-resident scholar at MEI, Guney Yildiz is a researcher and journalist based in London with a focus on Turkey, Syria, and the Kurds in the Middle East. The views expressed in this article are his own.