The Humanitarian Crisis in the Middle East: Highlights from the MEI Conference 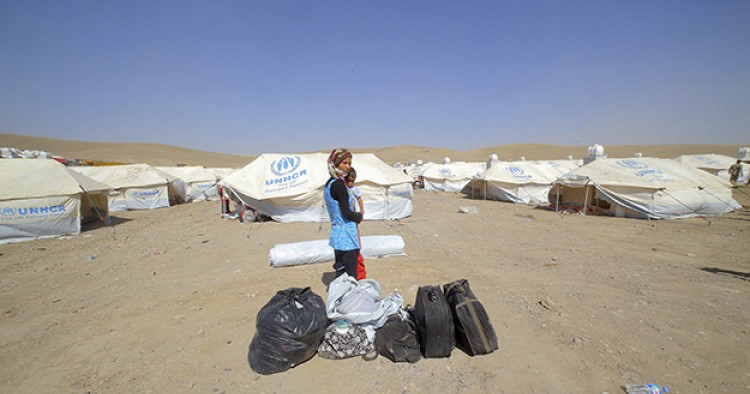 For decades, most refugee crises followed a pattern: A war erupted, usually in a poor country, and beleaguered civilians staggered across the nearest border. The United Nations organized a response, rich nations footed the bill, and aid groups sent in workers to tend to the needy. Even in extreme cases, such as the mass exodus from Afghanistan during the Soviet invasion in the 1980s, the crisis was largely confined to the country at war and a few immediate neighbors.

That model has been shattered in recent years. Some 60 million people are now displaced worldwide, the highest figure since World War II. The crisis is most acute in the Middle East, where multiple wars are uprooting families at a faster clip than any other region. And it’s not just the raw numbers that overwhelm. The turmoil has metastasized at a startling rate, refugees have scattered far and wide, and no country – no matter how distant – seems immune from the upheaval.

Highlight clips from "Cut Off from Care: The Health Crisis of Displaced Populations in the Middle East."

Against this backdrop, The Middle East Institute pulled together a wide range of experts for a conference in Washington, held on June 25, entitled “Cut Off from Care” to explore the challenges facing governments, international organizations, and humanitarian groups. The participants shared some of their best practices, toughest problems, and recurring themes with which they are wrestling.

Here are a few highlights:

The Domino Effect – Every new conflict unleashes a new humanitarian emergency and exacerbates existing ones. Iraq’s war over the past decade sent refugees flooding into Syria. When Syria’s conflict erupted in 2011, another outpour began. Many of those same refugees are now turning up in Libya, a seemingly strange choice given that country’s civil war. But Libya’s anarchy means that its coastline is no longer patrolled, making it the best launching point for those desperate to cross the Mediterranean.

This crisis is unfolding on three levels. On the first level, the surge of refugees has placed the greatest amount of stress on Syria’s immediate neighbors: Turkey, Jordan, and Lebanon. Nothing drives home this point like the scene at Jordan’s Zaatari camp, a desert wasteland when it was established in 2012. It was home to more than 100,000 Syrian refugees a year later, making it the fourth largest city in Jordan. A nearby camp has, to a small extent, relieved the pressure placed on Zaatari, but the huge demands on Jordan and other frontline states will remain for years. And, as Enis Baris, a sector manager for the Middle East and North Africa with the World Bank, pointed out, “Even without the conflicts, many of the health care systems in the region were under stress.”

On the second level, the Middle East conflicts are behind the unprecedented numbers of refugees trying to reach the southern shores of Europe. North African and West African economic migrants had been the source of much of the traffic, but now Syrian refugees account for the single largest group attempting to cross the Mediterranean, according to the UN.

And on the third level, the refugees are having an impact in places no one would have imagined a few years ago. A quarter million Syrians have reached Europe in the past few years, and many are making it well beyond the countries along the southern tier. In distant Sodertalje, Sweden, a place that has prided itself on welcoming refugees, native Swedes are starting to feel overwhelmed now that 30,000 of the city’s 90,000 residents hail from the Middle East.

With so many refugees spread over so many countries, there will be long-term consequences when the wars end and it comes time to rebuild. As a rule, refugees that travel farthest from their homeland are the least likely to return. Those with an education, profession, money, and language skills were among the first to leave and are the most likely to build new lives for themselves abroad. The brain drain in Syria and other war-torn countries has been extreme.

Wars in Middle Income Countries – Iraq, Syria, and Libya all had large, middle class populations along with functioning health care and education systems before they collapsed into chaos. Decades of development have been lost.

“Iraq was one of the [Middle Eastern] countries with the best health indicators in the 1980s,” said Ala Alwan, an Iraqi who is the World Health Organization’s regional director for the Eastern Mediterranean. He pointed out that Iraq’s war with Iran in the 1980s was followed by the first Gulf War in 1991, which led to more than a decade of international sanctions. The effect was devastating as Iraq saw its health indicators drop to the level of much poorer and less developed countries, like Yemen.

Alwan saw the possibility of renewal after the U.S. invasion ousted Saddam Hussein in 2003, and returned to his homeland to serve simultaneously as the minister of health and education.

“We were very much hoping this would be the beginning of rebuilding the health sector and the education system,” he said. But the ongoing fighting has driven out many doctors, nurses, and teachers, leaving many institutions a shell of what they once were. “The capacity in public health has deteriorated drastically over the past 10 years...What I’m seeing now is extremely painful.”

Technology Can Improve Aid – The ability to deliver and track aid has improved dramatically since Thomas Staal, the acting assistant administrator for democracy, conflict, and humanitarian assistance at USAID, first began working at the agency in 1988.

In the past, when shipments disappeared it was often impossible to figure out what went wrong, especially when security concerns kept the donors from the delivery point. But Staal noted that assistance going from Jordan into opposition areas in southern Syria has an extremely high success rate due in part to the high-tech savvy of Syrians.

“It’s very different than, say, operating in South Sudan,” Staal said. “We’re able to track parcels of assistance, whether it’s food, or non-food, through GPS technology. You get a bar code on there and when it arrives at the destination, they can take a cell phone picture of the bar code and the GPS is on it, so you know where it arrived.”

“We’ve actually had cases where a truckload of supplies arrived in a village but it was three crates short,” he added. “So somebody calls up on the cell phone from that village and says, ‘Hey, this truck is three boxes short. What happened to our supplies here?’”

The Advantages of Working on the Inside – When the International Medical Corps set up an operation in Damascus in 2007, it was one of the first international aid groups to work in Syria. At that time, Syria was peaceful and the aim was to assist Iraqi refugees, said Rabih Torbay, an IMC vice president who oversees the group’s programs in more than 35 countries. When the Syria conflict erupted four years later, IMC was already in place and knew the lay of the land.

“We had already established a good relationship with the Syrian Red Crescent Society,” Torbay said. “But working in Damascus now, with everything that’s going on, is a major challenge, [including] being able to implement what you really want to implement.”

Still, the lesson for Torbay is clear. If the IMC hadn’t gone into Syria years ago, it would have been too late once the war broke out. The U.S.-based group operates in several cities under government control, as well as in opposition areas and neighboring countries.

“You can imagine being an American organization working in Damascus now,” Torbay added. “So far, touch wood, we’ve been very well supported by the Syrian Red Crescent. They’ve cleared our supplies when we’ve needed them, and they’ve provided us with work permits.”

Greg Myre moderated one of the panels at the MEI conference.

Related articles emerging from the conference:

The Syrian Refugee Crisis: What's Next?, by Elizabeth Ferris

Caring for the Most Vulnerable Populations Affected by Conflict in the Middle East, by Michael Klosson

Responding to Assaults on Health Care in the Middle East, by Leonard Rubenstein

Donor Challenges and Opportunities for Meeting the Health Needs of Conflict-Affected Communities, by Thomas H. Staal

Funding Health Care in the Shadow of War, by Reida El Oakley