The Huthi Ascent to Power 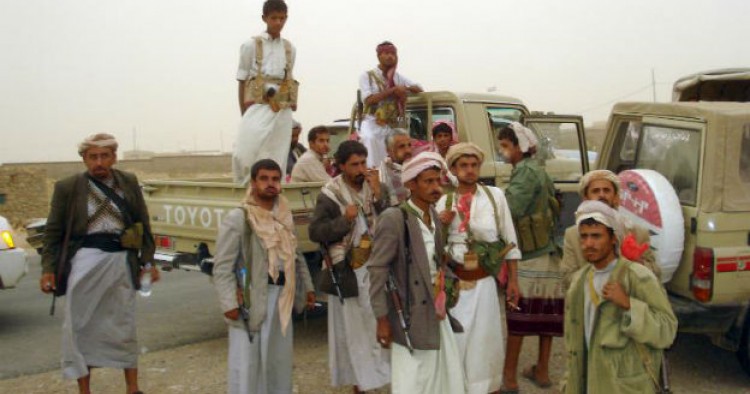 After capturing Amran in mid-summer, the emboldened Huthi movement (Ansar Allah) began a fall campaign against the national capital, surrounding Sana‘a with armed camps, organizing large demonstrations around government buildings inside the city, and demanding that the government repeal its recent decision to lift fuel subsidies before resigning. Tensions turned bloody on September 9 when gunfire broke out as Huthi demonstrators tried to force their way into the Prime Minister’s office in downtown Sana‘a.[1]

A movement that began in 1990 as a handful of students giving summer classes now dictates terms to the Yemeni government. Who are the Huthi and what do they want?

The Huthi movement defies easy definition;  it has changed dramatically in its short history and is subject to intense negative propaganda.  The Huthi movement’s origins lie in the Shabab al-Mumanin (the Believing Youth), which began in the early 1990s as a summer school program using modern means—videos and cassette recordings—to promote Zaydism among the literate youth of the north who had largely forgotten their ancestors’ religion.[2]

Zaydism, the religion of the imams that ruled Yemen for a thousand years, was severely repressed by Republican leaders during the years of the Yemen Arab Republic.[3]  A key component of Zaydism under the Imams was the idea that only the Sada, those in the blood line of the family of Fatima and Ali, are eligible to rule the Muslim community.[4]  In spite of the political diversity among the Sada, Republican leaders attack them all as agents of the ancient regime[5]; the government promoted Sunni Salafism and Wahhabism, imports from Saudi Arabia, in the Zaydi heartland as alternatives.[6]

In the liberal era of Yemeni unification in the early 1990s, the Sada searched for a new place in the Republic that still rejected them.  Some formed a political party, Hizb al-Haqq, but the party didn’t fare well in parliamentary elections in 1993 or 1997.  Other Sada activists worked within former president Ali Abdullah Saleh’s ruling party, and still others concentrated on religious and cultural revivalism.  Hussein al-Huthi began in Hizb al-Haqq and served in Parliament, but then abandoned politics to focus on grassroots cultural work.  As repression against Zaydism continued, he militarized the movement, urging members to purchase weapons to defend themselves against armed allies of the Republican state.[7]

From Student Activists to Seasoned Insurgents

When the Saleh regime endorsed the Bush administration’s war on terror and the U.S. invasion of Iraq in 2003, Hussein al-Huthi saw an opportunity to broaden the appeal of the Shabab by attacking Saleh’s alliance with the United States.  Though Saleh initially helped fund the Shabab, he responded to Hussein’s provocation with physical repression.  Shabab attempts to resist the arrest of Hussein quickly transformed into an armed conflict in Sa’ada in the summer of 2004.[8]   Hussein was killed at the end of the first war in the fall of 2004, but Hussein’s father, Badr al-Din al-Huthi, and his brother, Abd Malik al-Huthi, assumed leadership and refused to compromise with Saleh.  Five more wars ensued, each more bloody, until 2010 when the Huthi movement survived the onslaught of the Saudi and Yemeni militaries.[9]

The wars transformed the Huthi movement from student activists to seasoned insurgents.  It also transformed the Huthi base of support from Zaydi university students to all Yemenis aggrieved by Saleh’s policies in the north. Tribes and others whose property was destroyed by the government’s scorched earth policies, people who were disfavored by the regime, and those simply dissatisfied with Saleh policies found in the Huthis an inspiration for resistance to the Saleh regime.[10]

The Huthis were active participants in the mass demonstrations that rocked Yemen in the spring of 2011, and they figured prominently in the Gulf Cooperation Council’s agreement that ended Saleh’s reign, because they were seen as primary victims of Saleh’s policies.  One of the nine major issues that was addressed at the National Dialogue conference was how to alleviate the grievances of the Huthi in Sa’ada.  With its entrance into the National Dialogue, the Huthi movement was acknowledged as a political force in the national arena.  However, it had no representation in the transitional government lead by Saleh’s vice-president, Abd Rubbo Mansour Hadi.

Since the transitional government was formed in 2012, the Huthi have continued to expand in the northern part of the country around Sa’ada.  The Huthi leadership argues that its target is not the Yemeni state but those military units and leaders that serve particular party interests, particularly leaders of Islah and Ali Muhsin, who lead the wars against the Huthis.  The Huthi leadership sees Ali Muhsin as the architect of the intrusion of militant Sunni doctrines into Sa’ada and wants to ensure his military defeat.  The killing of the leader of the 310 Brigade loyal to Ali Muhsin in Amran in July was part of this Huthi policy against Islah’s military wing.

Yemenis are fed up with the incompetence of the transitional government.  The economy has deteriorated, threats to security have multiplied, and the transitional government is so paralyzed by internal divisions of the old political factions that it cannot even begin to address these problems.  The Huthi leadership is attempting to capitalize on widespread resentment against the transitional government and the transition process and to claim a role in the future government of Yemen. The Huthi leadership argues that its occupation of Sana’a is a continuation of the popular revolt that overthrew Saleh in 2011.  Many agree that the idea of a non-political, technical government capable of solving Yemen’s urgent problems has wide support throughout Yemen.  With their move on Sana’a, the Huthi are attempting to move even closer to the center of power by presenting themselves as legitimate brokers of credible government.

While the Huthis have gained widespread support for the overthrow of the transitional government, they face much opposition as well. The Saudis see the Huthis as a new Hezbollah; the Saudi diplomatic mission was airlifted out of Sana’a a day before violence broke out, an ironic development in light of Saudi support for the Zaydi Sada and the Hamid al-Din family in the civil war in the 1960s.  The Islahis and the Salafis are strongly opposed to the Huthis for obvious reasons, but the liberal elements of Yemeni society are also worried because the Huthis have at times shown a tendency to exact revenge against their enemies: Salafis and Islahis have been persecuted and expelled from Huthi controlled territory. While their roots are in a civil rights movement for the oppressed adherents to Zaydism, recent Huthi actions reveal a tendency to match Salafi aggression.[12]  The United States and the GCC support the transitional government of Hadi, but the transitional government has lost its legitimacy in Yemen. For the moment the crisis in Sana‘a has been averted by promises to meet the substance of the Huthi demands, but similar agreements following the Huthi occupation of Amran failed.

The Huthi movement today must choose between pressing ahead militarily and provoking a bloody civil war in the capital or using its considerable political capital to form a wider, more inclusive and legitimate government in Yemen, to begin to address Yemen’s pressing problems. The movement appears to waiver unpredictably between the two options.

[1] “Clashes between Huthi Demonstrators and Guards of the Prime Minister in Sana‘a and Reports of Casualties” (In Arabic), Al-Masdar Online, 9 September 2014, http://almasdaronline.com/article/61796.

[2] The following references provide an introduction to the movement: “Yemen Press Publishes Mohammed Badr al-Din al-Huthi: Who are the Huthi?” (in Arabic), Yemen Press, 6 September 2007, http://yemen-press.com/news1053.html; Adel Al-Ahmadi, The Flower and the Rock: The Shi’i Insurgency in Yemen and the Position of the Shi’i Minority in the New Scenario  (in Arabic) (Nashwan al-Himyari Center for Publication and Studies, N.D.), 134ff; Sabri Mohammed Al-Darwani, Sa’adah: The First War: Reasons and Consequences (2013); Barak Salmoni, Bryce Loidolt, and Madeleine Wells, Regime and Periphery in Northern Yemen: The Huthi Phenomena (Washington, DC: Rand, 2010), 93.

[4] Ashwaq Ahmed Mahdi Ghlis, Revival of the Idea of the Imamate among the Zaydi in Yemen (in Arabic) (Cairo: Madbuli Bookshop, 1997).