Impact of Low Oil Prices and Recalibration of U.S. Policy 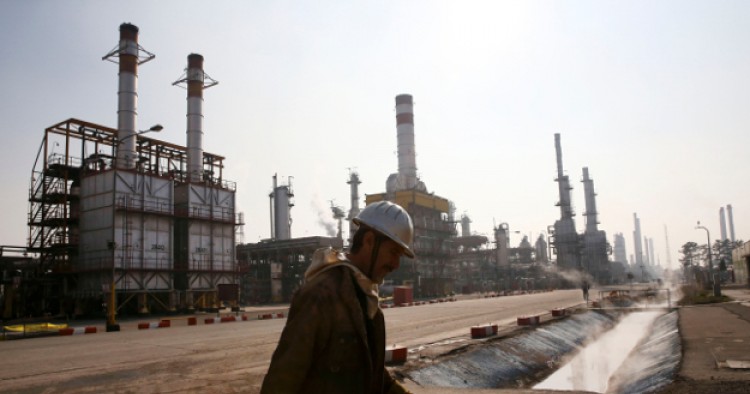 The Middle East has traditionally been seen as the ultimate source of energy for the world. With 60 percent of the traditional crude oil reserves and 30 percent of the crude supply, it has maintained this position throughout the past 80 years. However, the past five years have seen major changes in this picture. Saudi Arabia has remained the leading supplier of crude oil in the Middle East with a production today of 10.2 million b/d and is the most reliable supplier in OPEC. Libya is for all intents and purposes out of the market. Iran is exporting only 1.2 million b/d and is only still dreaming to increase production when sanctions are lifted. Iraq has had some success increasing production in 2014 and 2015 to 4 million b/d, of which 3 million are exported, but is held back by security problems and constant bickering with the Kurdish north, which now controls 750,000 b/d of the production. 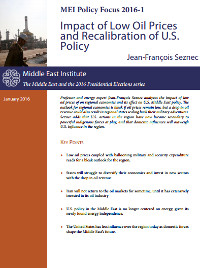 On the natural gas (NG) front, Iran is now listed as having the largest reserves in the world—1,192.9 TCF (trillion cubic feet)[i]—but has been a net importer of NG due to the lack of investment in its fields and the inability to obtain technology from foreign partners. Algeria has managed to maintain its gas production and supplies to Europe through its three cross-Mediterranean pipelines and is poised to continue doing so for the near future. To every observers’ surprise, even Libya has managed to maintain some export of gas by pipeline to Italy, averaging 600,000 m3/d.

Of course, the most important gas producer of the region is Qatar, which now operates the largest liquid natural gas (LNG) capacity in the world and exports over 70 millions tons per year of its production worldwide, mostly to the Far East.

However, both the crude oil and natural gas industries in the Middle East were deeply affected by the drastic decline in prices from the summer of 2014 to now. Gross oil income of Saudi Arabia declined from about $350 billion per year to around $155 billion per year at an average of $50/b.[ii] The income of all the other producers have been impacted by the same ratio. Even LNG prices have declined drastically. Qatar’s contracts are indexed to the price of crude oil and, thus, Qatari income has been cut severely.

In other words, every country in the Middle East that has a link to energy is now awash in a sea of red ink as their budgets are sorely stretched by ballooning defense and security expenditures, as well as large subsidies to a fast growing population. The budget deficit of Saudi Arabia alone is expected to be about $98 billion in 2015[iii], not including the major expenses incurred by the war in Yemen and the support of militias in Syria.

Hence, prospects for even the richest countries of the Middle East are bleak if prices for energy do not improve and the increasing budget demands of military and security apparatuses do not decline. In the short-to-medium term, major deficits will not seriously impact the ability of the richest to survive. Saudi Arabia has enough cash reserves and financial resources for five to six years at today’s expenditure level; the UAE, vastly longer. However, countries already on the edge may become overwhelmed. Algeria has substantial cash reserves of $159 billion as of June 30, 2015, but is drawing down these reserves rapidly in light of a high budget deficit, expected to reach $51 billion in 2015. Simply, without major adjustments in the economy, which could create social pressure, Algeria will run out of money in three years.[iv][v] Iran also is suffering greatly from the low prices. At this time, the Islamic Republic only exports 1.2 million b/d, but this implies that its net earnings have fallen by at least $18 billion per year. Libya will not have a chance to recover. Iraq will also find it difficult to get back on its feet, and may become increasingly dependent on Iran’s political and economic support to keep the country together. Egypt is no longer a natural gas exporter and already imports LNG—luckily at lower prices than it used to export at.

The present instability and the havoc in Syria, Yemen and Libya are not helped by the financial stress due to lower income from energy exports. However, surprises can happen in the oil markets, which could improve the situation drastically or perhaps make it even worse.

For example, if after many months of negotiations Saudi Arabia and Russia were to agree with a few other producers to limit crude oil production by 1 million b/d or more, it could bring an immediate increase in global oil prices, perhaps as high as $80/b. This would immediately increase the income of Saudi Arabia by $93 billion, and regionally it would improve the fiscal situation in all GCC countries, help Iran recover, and Iraq rebuild. It would not be a panacea, however, as it will not do anything to stabilize Libya, where militias will fight harder for control of the resources. It would not bring stabilization in Syria and northern Iraq, nor will it limit the tensions between Kurds and Iraqis.

Perhaps a less obvious result would be the continuing growth of the energy-based industries in the Gulf. Today, Saudi Arabia is one of the largest suppliers of chemicals and fertilizers in the world. The Gulf as a whole produces 15 percent of all the world’s aluminum. With increasing prices of energy, prices for industrial products from the Gulf will recover and allow the relative size of the non-petroleum economy to grow. Private and state investments in industry will continue to grow rapidly. The relative size of non-oil GDP to oil GDP will increase, which will translate into an improving unemployment rate and in the long run decrease the Gulf region’s dependence on crude oil.

A less optimistic scenario would be a continuing decline in energy prices worldwide. Budget deficits would only increase, as would the inability of the states to make any change to improve their situation. High deficits will mean less money to fight instability and threats from internal and external organizations like ISIS or al-Qa’ida.[vi] Furthermore, major declines in state income would also mean less investment in industry, which in the medium-term would translate into less employment and more social tensions. Hence, even the richest countries, like Saudi Arabia or Qatar, would suffer some setbacks in their industrial development beyond oil.

In both positive and negative cases, however, one cannot credit U.S. Middle East policy as a major cause. The development of ISIS, al-Qa’ida, the war in Yemen, and the civil war in Syria would have happened whether or not energy prices had been high or low. The P5+1 agreement with Iran, which is a major achievement of U.S. policy in the Middle East, is unlikely to result in a major change in the energy balance of the Gulf or the price of energy in the near future. It is likely that Iran will not return to the oil markets until it can invest extensively in its oil fields. When it does return to the crude market, it may not increase exports by more than 1 million b/d over some time, which should not spook the markets.

In spite of the historic perception that U.S. policy in the Middle East has been dominated by energy supply concerns, this is increasingly not the case as the United States moves toward energy independence. Furthermore, it would seem that U.S. policies, whether designed to support or undermine dictators, theocracies, democracies or non-state actors, have come to play a secondary role to powerful indigenous and regional factors. In a somewhat somber view, one could argue that the region will probably reach a nadir, and rise from its ashes largely due to the efforts of its own people and the luck of energy prices. Washington’s efforts to influence the Middle East will be trumped by religious and socio-political forces over which the United States has little influence and fundamentally does not fully understand. Therefore, the prescription for U.S. Middle East policy should be simply based on trying to do no harm, focus on economic policies that benefit both the United States and the Middle East and let the people of the region decide their own fate without imposition from outside.

How this will all translate in U.S. campaign politics is hard to predict, but it is safe to assume that low oil prices, which bring further instability to the Middle East, will be translated into demands for a stronger U.S. military and less reliance on unstable, undemocratic Arab states. On the other hand, higher energy prices will bring demands for decreasing U.S. reliance for its energy on unstable, undemocratic Arab states. By the same token, regardless of outcomes, President Barack Obama’s legacy will be impugned by all Republican candidates, who will use both high and low oil prices as a proof that his Middle East policies have provoked instability in the region.

In sum, it seems that whatever the policies of the United States, the criticism leveled against Obama by opponents will be shrill and constant. There will be consistent demands for a stronger, tougher military response, which ultimately could be not only useless, but in fact dangerous to the United States. More military adventures in the Middle East will only consume more blood, with no better results than the previous efforts in Iraq and Afghanistan, and cut severely into the country’s need for the productive investments required for the United States to meet its competition worldwide. Furthermore, the huge increases in military expenses promoted by the various Republican candidates will only increase U.S. deficits and dependence on foreign—mainly Chinese—money.

In the long run, the continuing and increasing dependence on military intervention in lieu of diplomatic strategy will translate into the United States further sacrificing what little ability it has to influence events in the Middle East.

[ii] The gross income from oil computed at $50 for a total export of 8.5 million b/d of crude, refined products, and Natural Gas Liquids, could total $155 billion.

The statement from the Saudi Ministry of Finance on December 28, 2015, announcing the new budget showed that the net income to the state from oil was $118 billion in 2015, which would indicate that about $37 billion does not directly enter the accounts of the Kingdom.

[iii] Saudi Arabia announced on December 28 that it had a deficit of $98 billion for 2015. It is not known exactly how much of the defense expenses are included in this figure. In fact the actual deficit could be much higher, if the estimates of IISS, which place military expenses at about $80.8 billion in 2014. Military expenses for 2016, which are announced in this new budget, were given at $19.9 billion.

[vi] Naturally, it will also mean that Iran and Saudi Arabia will have less money to finance their various proxies in Syria, Iraq, Libya, Yemen or Lebanon. One could argue that the financial bleeding that the proxies create on both Iran and Saudi Arabia will provide an incentive to the two countries to come to terms.   Unfortunately, it may be unlikely that these proxies will be cut off entirely as they provide relatively cheap [albeit, in the billions of dollars] way to fight their various foes without engaging their own population.