Indonesia and Tunisia: Democracy as a Distinctive Link 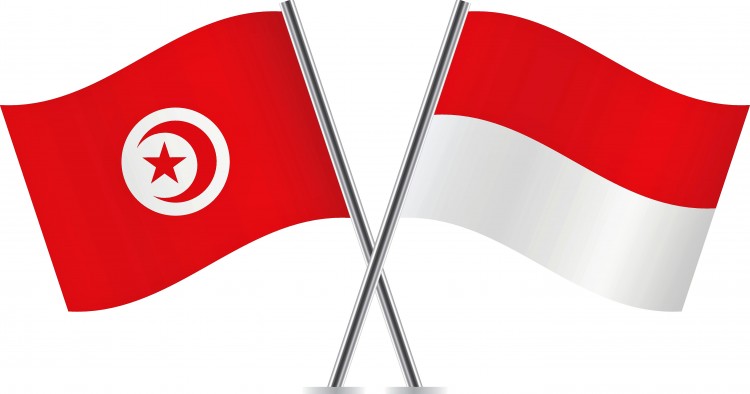 The centuries-old bonds between the peoples of the Arab-speaking lands and the Indonesian archipelago are largely the outgrowth of an ongoing process of the transfer of Islamic knowledge and ideas from west to east. The arrival of Arab traders, Sufi preachers and ulama in the Indonesian archipelago since about the 13th century and the participation of pilgrims in the annual hajj forged links based in Islam between the Malay-Indonesian world and the Arabian Peninsula. Since the 19th century Egypt, home to the prestigious al-Azhar University, has increasingly become attractive for Malay-Indonesian seekers of knowledge of Islam. It is this transnational process of knowledge acquisition that nourished a sense of belonging among Indonesian Muslims to the umma, the global Islamic community.

Yet, there are no such historical connections between the Malay-Indonesian world and the more western reaches of the Maghreb. Not until the early 1950s did ties develop between newly independent Indonesia and Tunisia, then still a French protectorate. Importantly, those ties were based mainly in politics, and not in religion. At the time, the Tunisian national movement, led by Habib Bourguiba, seems to have regarded Indonesia as an inspirational model of anti-colonial struggle. Bourguiba was also attracted to the idea of “non-alignment” advanced by Indonesian President Ahmed Sukarno Indonesia, among others.[1] Today, more than six decades after having achieved independence, Tunisia again stands at a watershed in its political development — transitioning from an authoritarian to a democratic system. These circumstances have given the relationship between Indonesia and Tunisia a fresh tailwind.

Indonesia’s second parliamentary elections and first direct presidential elections in 2004 mark a dividing line between the gloomy view associated with the difficult initial stages of the post-Reformasi transition to democracy and growing optimism about the country’s future. Indonesia emerged from the 2004 elections with greater national self-confidence and a more assertive foreign policy. Under the presidency of Susilo Bambang Yudhoyono (2004–2014), democracy promotion became a hallmark of Indonesia’s foreign policy. Thus Indonesia sought to use its new democratic credentials for promoting political reforms in Asia and the Muslim world — thereby casting itself as a potential model of democracy, a role that the West has expressly encouraged.[2]

Indonesia’s early efforts to incorporate its democratic identity into foreign policy included initiating in 2008 the Bali Democracy Forum (B.D.F.), an annual intergovernmental gathering aimed at sharing experiences and best practices to advance democracy and human rights.[3] The Indonesian Foreign Ministry subsequently established The Institute for Peace and Democracy (IPD), an independent, nonprofit organization based at Udayana University in Bali, to serve as the Forum’s implementing agency.

In remarks to the U.N. General Assembly (U.N.G.A.) in September 2009, then-Foreign Minister Hassan Wirajuda, reflecting on Indonesia’s political transition, asserted that “[w]e in Indonesia are strong believers in democratic reform” … and emphasized the country’s democratic identity as being “an important asset in Indonesia’s foreign relations.[4] The next year, in his own address to the U.N.G.A., Wirajuda’s successor, Marty Natalegawa, echoed these sentiments, stating that “As the world’s third largest democracy, Indonesia is proof that Islam, democracy and modernization can go hand in hand.”[5] In its strategic implementation report, Strategic Plan 2010-14, the Ministry of Foreign Affairs assigned Indonesia’s support for the promotion of democracy and human rights equal priority with other foreign policy objectives.[6]

Indonesian Democracy: A Model for the Arab World?

Prior to the Arab Spring, Indonesia had extended invitations to Arab counterparts to attend meetings of the Bali Democracy Forum. Yet, perhaps unsurprisingly, this outreach proved infeasible given that authoritarian regimes remained entrenched in Arab countries while democratic voices were largely suppressed.

Soon after the Arab Spring uprisings, however, the prospects for democratic reform in the MENA region seemed, momentarily, to be bright. Some Western commentators, observing events in Tunisia and Egypt unfold, raised the question of whether the Indonesian experience might serve as a model suitable for the nascent democratic processes there.[7] Nevertheless, several factors would seem to have made Indonesia an unlikely candidate to play such a role: 1) the vast geographic distance and socio-cultural differences separating the country from the Arab world; 2) the very limited knowledge and sparse media coverage of Indonesia in the region; [8] the fact that historically the transnational transmission of ideas and influence had flowed one way, to rather than from Indonesia; and 4) a certain patronizing attitude among Arabs toward Indonesian Muslims regarding matters of the faith. [9]

For all of these reasons, it came as something of a surprise when, in March 2011 the Indonesian Foreign Minister, Natalegawa, stated that Egypt had requested assistance from Indonesia in organizing democratic elections and regulations related to political parties. Having acceded to the request, Natalegawa was nonetheless careful to note that “... we have to do it wisely so that it doesn’t seen seem as though we’re preaching to them.”[10] In the immediate aftermath of the protests that swept the Middle East, the IPD convened several workshops, beginning with the “Egypt-Indonesia Dialogue on Democratic Transition.”[11]

These activities notwithstanding, it was the Turkish democratic model that received much more favorable attention in the region than did the Indonesian one in the immediate aftermath of the uprisings, as reflected in the emerging new democratic discourse of the Arab World. At that time, President Recep Tayyip Erdogan and the Islamist-based Justice and Development Party (A.K.P.) appeared committed to making Turkey a model of democracy for Muslim-majority countries. The idea that Tunisia, which had sparked the Arab Spring, might be a suitable candidate for this model[12] gained some currency, including in Tunisia itself. In fact, soon after the Jasmine Revolution, Rashid Ghannouchi, the leader of the Islamic Ennahda Party and an important figure in the post-authoritarian era who maintained close relations with the AKP,14 [13] argued that Turkey proved Islam and democracy are compatible, adding: “... this is what we see as the model for ourselves.”[14] This approach was further evident after Ennahda emerged victorious in the country’s first democratic election in October 2011.[15]

However, with the rollback of political and civil rights as well as other signs of resurgent authoritarianism in Turkey, the latter’s appeal as a model of democracy began to wane in Tunisia, as elsewhere. In fact, disenchantment with the Turkish model was evident even while Ennahda was still in power.[16] With the electoral victory of the secular Nidaa Tunis Party in 2014 and Ennahda’s subsequent political-ideological moderation — including its declaration in 2016 of separation of religious from political activities — Tunisia’s political trajectory and that of Turkey diverged even more sharply.[17]

When Indonesian Foreign Minister Natalegawa first revealed the Egyptian request for democracy support, he noted that Tunisia had also sought similar assistance. Interestingly, in September of 2011, a month before Ennahda Party prevailed in Tunisia’s first democratic elections, Ghannouchi, mentioned the Indonesian example in a favorable light.[18] In April 2012, when Ennahda was in power, several Tunisian delegates joined the third IPD Egyptian-Indonesian Dialogue on Democracy workshop.[19] Whereas the Egyptian side to this dialogue was almost exclusively represented by political activists and non-governmental experts, the Tunisian contingent included official government representatives; the latter's participation is perhaps indicative that Tunisia’s Islamic, as well as secular political actors were favorably disposed toward Indonesia’s democracy.

Since 2013 the cooperation on democracy between Indonesia and post-Arab Spring countries has been limited to Tunisia. This cooperation has involved public officials and civil society actors,[20] and reflects a shared interest in demonstrating to the world that Islam and democracy are compatible. Accordingly, Indonesia decided to establish in Tunisia a chapter of the B.D.F, that will enable scholars, politicians and academics from both countries as well as from other Middle Eastern countries to discuss ways to reinforce good governance, tolerance and peaceful coexistence.21] Explicit references to “democracy” are notably missing from official statements regarding Indonesia’s relations with Middle Eastern countries — except in the case of Indonesia-Tunisia relations, where officials of the two countries speak proudly of their shared interest in advancing democracy. It also seems that this increasing cooperation on democracy, including the promotion of interfaith dialogue and religious harmony, has given a boost to the overall bilateral relationship.[22]

Certainly, one cannot ignore differences between the Indonesian and the Tunisian contexts in which the democratization process has unfolded.[23] However this cooperation seems to be built on a solid, authentic basis. Clearly, an important building block for this cooperation has been the crucial role played by civil society, which was robust in Tunisia even before the outbreak of the Arab Spring and strong in Indonesia as well. In fact, the shared consensus on, and commitment to a civic state, rather than a religious one, enabled an effective civic resistance movement, successful non-violent transition to democracy and the ability to surmount political crisis and to translate collective will into a democratic action in Tunisia.[24] Similarly, Indonesian civil society’s staunch defense of the state ideology of Pancasila has allowed for the country to make a transition into a secular oriented democracy.

Perhaps in absolute terms, cooperation on democracy between Indonesia and Tunisia is rather modest. However, in relative terms, taking a wider view of the region in the post-Arab Spring period and in the context of the centuries-old asymmetrical relations between Arab-speaking lands and Indonesia with respect to the transferring of ideas, such cooperation is very impressive cooperation. And there are additional interesting historical insights. Indonesia is home to the world’s largest Muslim population and a significant actor in Southeast Asia. Yet, from a certain vantage point in the Arab World — the epicenter of Islam’s holiest places and centers of learning — Indonesia lies on the Muslim World’s distant periphery. For centuries, Tunisia likewise lay on the periphery of the Muslim World — i.e., on the western rim of the Ottoman Empire until coming under French protectorate. Yet, despite the vast geographic expanse separating the two countries, Indonesia and Tunisia “discovered” each other nearly seven decades ago. At that time, Indonesia was then an inspiring example for Tunisians waging an ultimately successful anti-colonial struggle for independence. And lately, as Tunisia has embarked on a transition to democracy, it has again found Indonesia to be as inspirational example.

[11] See Giora Eliraz, “Indonesia’s Role in Egypt’s Democratisation,” The Interpreter, June 23, 2011, accessed October  29, 2017, https://www.lowyinstitute.org/the-interpreter/indonesias-role-egypts-democratisation; Eliraz, “The Path from Dictatorship to Democracy”; and James B. Hoesterey, “Is Indonesia a Model for the Arab Spring? Islam, Democracy, and Diplomacy,” Review of Middle East Studies 47, 1 (Summer 2013): 58-60.

[13] Kemal Kirişci “The Rise and Fall of  Turkey as a Model for the Arab World,” The Brookings Institution, August 15, 2013, accessed October 29, 2017,  https://www.brookings.edu/opinions/the-rise-and-fall-of-turkey-as-a-model-for-the-arab-world/.