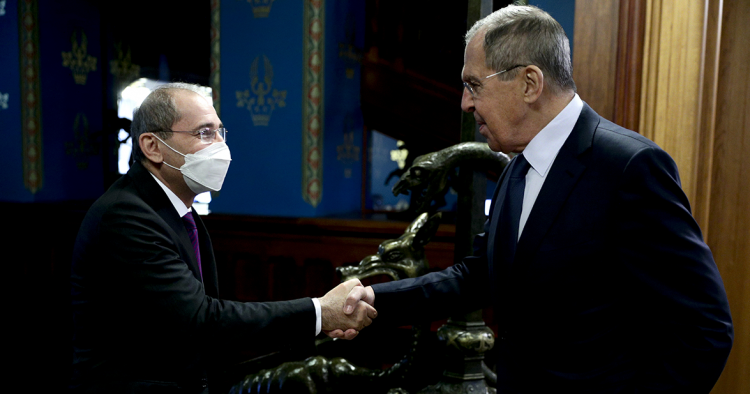 The Lavrov-Safadi meeting underscored the strength of bilateral relations between Russia and Jordan. Even though the Soviet Union blocked Transjordan’s membership in the U.N. until 1948 and King Hussein periodically viewed the USSR as a threat to Jordan’s stability, King Abdullah II’s ascension to power in 1999 strengthened Russia-Jordan relations. During his first two decades on the throne, Abdullah II visited Russia 19 times and established a close personal relationship with Russian President Vladimir Putin. In October 2019, Abdullah II expressed support for the “strong presence of Russia” in Middle East affairs and Jordanian officials view Russia as a core pillar of the emerging multipolar order in the MENA region.

Russia’s partnership with Jordan is undergirded by growing commercial links, convergent interests in Syria and Libya, and community-level bonds. When U.S.-Jordan relations were strained by President Donald Trump’s recognition of Jerusalem as Israel’s capital in December 2017, Russia emerged as a key beneficiary. Trade between Russia and Jordan increased from $157 million in 2017 to $602.6 million in 2018. Russia also expanded its wheat exports to Jordan, as it viewed the country as a springboard for entry into more lucrative Middle Eastern agricultural markets, such as Algeria, Iraq, and Saudi Arabia.

Although Jordan rejected Russian nuclear energy giant Rosatom’s $10 billion plant construction proposal in June 2018, Russia has left the door open to supplying small modular reactors to Jordan. This setback did not disrupt the expansion of Russia-Jordan economic cooperation. In November 2018, Jordan announced the creation of a special industrial zone that would be used by Russian firms, and signed a slew of economic cooperation deals with Russia in November 2019. Russia hopes that these contracts could convince Jordan to convert its September 2017 memo on trade with the Eurasian Economic Union (EAEU) into full membership and revitalize free trade negotiations with Jordan, which have been dormant since 2005.

Beyond the expansion of commercial links, Russia views Jordan as a useful partner in regional security crises. Even though Abdullah II called for Syrian President Bashar al-Assad’s departure in November 2011, Jordan cooperated with Russia after its September 2015 military intervention in Syria. In October 2015, Lavrov stated that Russia coordinated with Jordan on its air campaign in Syria. A working mechanism on Russia-Jordan counterterrorism cooperation was subsequently established in Amman. Jordan also acts as a bridge between the U.S. and Russian military interventions in Syria. For example, King Abdullah II has used dialogue with Moscow to strengthen U.S.-Russia cooperation against ISIS and Iran’s military buildup in southern Syria.

These regular consultations have evolved into direct cooperation between Russia and Jordan in Syria. Lavrov has publicly endorsed Jordan’s efforts to rebuild civilian infrastructure in southern Syria and Amman’s support for the repatriation of Syrian refugees. Jordan’s challenge to Iranian hegemony in southern Syria caused Moscow-based journalist Igor Yanavryov to argue that Jordan has given Russia a “new foothold in Syria.” Jordan has also participated as an observer in the Russian-led Astana peace talks. Notwithstanding this cooperation, disagreements between Russia and Jordan on Syria persist. In early 2018, Russia did not facilitate Jordanian aid deliveries to areas of Syria with a Jabhat al-Nusra presence and Lavrov urged Safadi to expel the White Helmets from Jordan during his Feb. 3 meeting. In spite of these disagreements, Russia cooperates more extensively with Jordan in Syria than with like-minded Arab states, such as the United Arab Emirates (UAE), Oman, and Egypt.

Since Libya National Army (LNA) head Khalifa Hifter began his offensive on Tripoli in April 2019, Russia and Jordan have expanded their cooperation in Libya as well. Jordan shares Russia’s trepidations about Turkey’s assertiveness in the eastern Mediterranean and has leveraged its alignment with Hifter to expand its diplomatic role in Libya. Although Russia and Jordan are officially focused on promoting intra-Libyan dialogue, the U.N. has named both countries as violators of the arms embargo against the LNA. These arms embargo violations might occur in a coordinated fashion. While Jordan actively supports Hifter’s offensive ground operations, Russian Wagner Group private military contractors (PMCs) bolster the efficacy of LNA snipers, mortar, and artillery crews. Jordanian-made armored vehicles also operate alongside Russian air defence systems in Libya. The growing interoperability of Russia and Jordan’s militaries in Libya is facilitated by the lack of pushback from the United States, which pays more attention to UAE financial support for Russian Wagner Group PMCs.

Counterterrorism cooperation between Kadyrov and Abdullah II helped create ideational bonds between Russia and Jordan. The 2016 Grozny Conference on Sunni Islam, which denounced the Muslim Brotherhood and Wahhabism, included Grand Mufti of Jordan Abdul Karim Khasawneh and Kalam scholar Sa’id Foudah among its participants. RT Arabic is the 90th most viewed website in Jordan, which places it ahead of Al-Jazeera in 126th place and Al-Arabiya in 170th place. The presence of 100,000-170,000 Circassians in Jordan and Tatarstan’s strengthening commercial relations with Jordan, which are especially pronounced in the construction and IT sectors, further augment Russia-Jordan bilateral ties.

Even though Jordan welcomed the election of U.S. President Joe Biden, Amman still views Russia as an integral partner. As the Biden administration seeks to revive negotiations on a two-state solution in Israel-Palestine and de-escalate tensions with Iran, Jordan could extend its position as an intermediary between the U.S. and Russia in Syria to new theaters. This role could facilitate the entry of American and Russian investment into Jordan’s struggling economy, and further Amman’s aspirations for diplomatic influence in the Arab world.

Samuel Ramani is a DPhil candidate at the University of Oxford’s Department of Politics and International Relations. Follow him on Twitter@samramani2. The opinions expressed in this piece are his own.