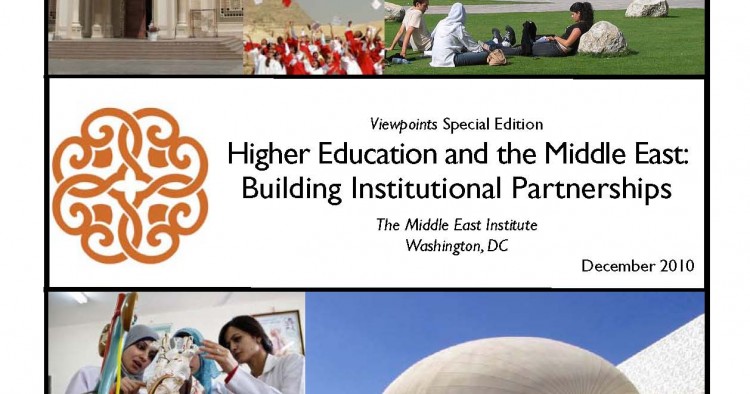 The first volume of essays in MEI’s special series on Higher Education and the Middle East dealt with Serving the Knowledge-based Economy. Volume 2 addressed Empowering Under-served and Vulnerable Populations. This final volume examines yet another feature of the changing landscape of higher education in the region, namely the proliferation of institutional partnerships. As this collection makes clear, there exists a rich variety of such partnerships, ranging from the establishment of joint programs and foreign branch campuses to individual mentoring relationships. These partnerships, which serve as vehicles for the transmission of ideas, information, and pedagogical practices, are aimed at equipping the next generation with the requisite knowledge and skills to flourish. They also provide new ways to stimulate creativity and foster cross-cultural harmony. Many of them do just that. Yet, as a number of the authors point out, some of these partnerships are not without their limitations and challenges, including how to link pedagogy to culture and how to ensure that a high quality of education is made available to students by foreign educational providers. To be sure, the future of the Middle East hinges on unleashing the potential of the region’s human capital. As this series shows, investment in and reform of higher education is underway across the region. The hallmark of many of these initiatives is educational “borrowing” of one form or another. However, neither the learning outcomes that they have generated nor their effects on Middle Eastern economies and societies have yet to be fully felt.