Iran and the economic fallout of COVID-19 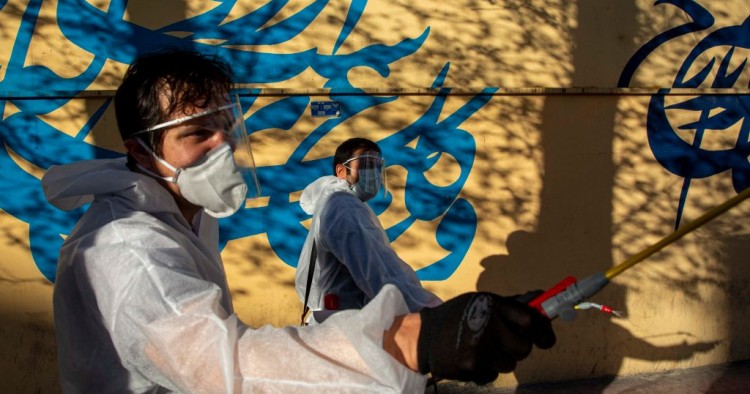 COVID-19 presents a major threat to the global economy and the health of millions of people around the world, but its impact on Iran, one of the early epicenters of the outbreak, has been particularly severe. With official figures of nearly 75,000 confirmed cases and over 4,600 deaths, it is among the top 10 hardest hit countries. The outbreak is expected to peak around late May and researchers are worried that if the Iranian public and government do not adhere to significantly stricter quarantine and social distancing measures, COVID-19-related deaths could reach as high as 3.5 million or 4.3 percent of Iran’s total population. Exacerbated by the effects of U.S. sanctions and the Trump administration’s “maximum pressure” campaign, the economic fallout is likely to be wide-ranging and severe, hampering the government’s ability to effectively respond to the crisis. Optimistic estimates put the impact in 2020 at around 15 percent of GDP, while others suggest it could be far worse, reaching as high as 30 percent. It is also likely to result in massive job losses, which if not addressed swiftly and effectively, could lead to political and social unrest in the near future.

The Iranian labor market was already suffering from high unemployment rates before the pandemic, especially among college-educated youth. In the best-case scenario, the estimated economic contraction in 2020 will put 3-4 million jobs at risk, potentially pushing the actual (not official) unemployment rates from around 20 percent now to more than 35 percent in just few months. Similar to the U.S. and Europe, small businesses, the transportation industry, hospitality, and the services sector in general — which employs more than half of all working Iranians — will get hit the hardest. The timing could not have been worse because Nowruz, the Persian new year that marks the first day of spring, is the most profitable period of the year for many of the country’s small businesses, retail stores, ground and air transportation, restaurants, and hotels.

Those working in the informal economy and daily wage earners, which make up nearly a quarter of the 24 million working Iranians, are likely to be the worst affected. With no fixed salaries, little to no savings, and inadequate coverage from formal insurance and social protection schemes, these workers face the greatest risk of infection as they cannot afford to stop working and are fully dependent on their daily earnings. Aware of this fact and worried that strict quarantine measures would immediately push an additional 20 percent of the population into extreme poverty, which could potentially brew more social unrest, the Iranian government has shied away from imposing stricter quarantine measures that epidemiologists recommend to slow down the rate of the virus’s spread. In other words, faced with the medium-run tradeoff between the economy and public health, the Iranian government seems to have chosen the economy.

However, no matter the government’s policies regarding the quarantine, the 3-4 million job losses associated with a sudden and deep economic contraction in 2020 seem to be inevitable. As a result, the government is scrambling to offer loans to the 23 million households already receiving monthly cash transfer subsidies, known as Yaraneh. However, given the minuscule size of these loans — less than $65 or equivalent to the monthly income needed for a family of two in Iran to remain just above the extreme poverty line — the effectiveness of such measures in reducing the economic impact of COVID-19 is highly questionable. Initially, these loans were to be extended with a 12 percent interest rate, but realizing the political risks associated with such a move, the government later decided to make them interest-free.

Given the dire state of affairs, these small gestures are unlikely to address the Iranian public’s profound dissatisfaction with how the government has managed both the economy and the pandemic. The COVID-19-related economic downturn in 2020 will only add to the already high levels of frustration, especially among the two tails of the labor force: university-educated youth and unskilled workers. The vast majority of the expected 3-4 million jobs losses will take place in the informal economy, where most of the unskilled labor is concentrated. Moreover, with three consecutive years of economic contractions (in 2018, 2019, and 2020), the Iranian economy has little to no capacity to create the white-collar jobs needed to absorb millions of young university graduates — graduates who were already facing unemployment rates upwards of 30 percent even before the pandemic. The economic collapse resulting from COVID-19 will likely only add to the deep frustrations of these two groups of Iranians, who don’t have much to lose and have little to hope for in term of economic aspirations.

If not addressed immediately and effectively, widespread job losses and the subsequent harsher labor market conditions could potentially lead to more political instability and social unrest. This is especially true following the violent unrest in November 2019 over gasoline price hikes, the public outrage over the accidental downing of the Ukrainian passenger airliner in January 2020, and the rapidly declining popularity of President Hassan Rouhani’s government in his second term. The Iranian government now faces one of the worst crises — if not the worst — since the 1979 revolution, and there is very little it can do to address the economic fallout. More than 20 percent of the population was already under the extreme poverty line even before the pandemic and the government’s straitened finances mean it has very little capacity to expand social welfare programs to address the economic hardships facing millions of families.

Potentially counterbalancing these developments, however, is the global nature of the COVID-19 crisis. Economies around the world have been severely affected by the pandemic — the U.S. alone lost more than 17 million jobs in just three weeks. It is also impossible to ignore the central role of U.S. sanctions in the recent faltering of Iran’s economy and its capacity to fight the disease. Imposing additional sanctions on Iran and pressuring the IMF to reject Tehran’s request for an emergency loan of $5 billion are the latest moves by the Trump administration as it seeks to choke the Iranian economy at a time when the country and the world are hit hard by the pandemic. Against this backdrop, the Iranian public may actually show more empathy and solidarity with their government. If history provides any guide, Iranians tend to unite during times of exogenous shocks and crises, especially if such crises are exacerbated and exploited by hostile outside forces.

This may explain why despite the growing unpopularity of Rouhani’s government, its widespread mismanagement of the economy and the pandemic, and the resulting economic and public health crises, there is as yet no sign of social unrest. On the contrary, if anything, there seems to be an increasing sense of unity and empathy among the public, at least for now. How long this will last is uncertain, but one thing is clear: How the Iranian government responds in the weeks and months ahead to what may well be its biggest challenge yet is likely to have a deep impact on Iran’s economy and society for years to come.