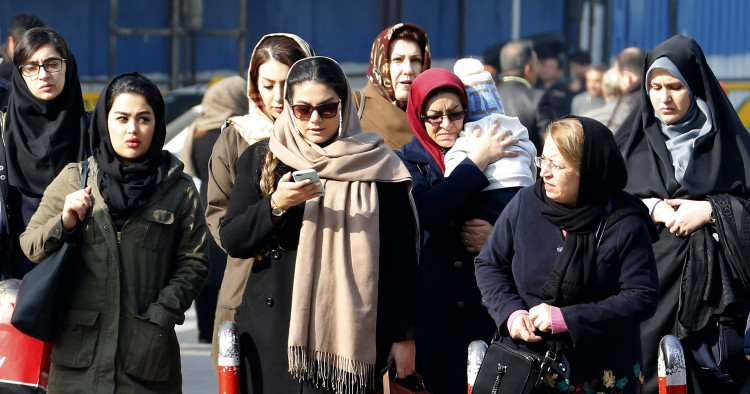 For many decades, Iran and Saudi Arabia have been bitter rivals, but not over women. If there was a competition, it was only over whose government could impose more limitations on their female population.

This changed in September 2017, however, when the new Saudi monarch, King Salman, granted women the right to drive by royal decree, a measure that took effect the following June. Ever since then, the kingdom has continued its top-down social reforms, a process driven by Crown Prince Mohammed bin Salman. Women are now permitted to occasionally perform in concerts. They can have passports, travel, and start their own businesses, all without the permission of a male guardian. In the latest ruling announced this February, women can even join the military. Meanwhile, the Iranian government continues to forbid women from singing in public, attending sporting matches in stadiums, or riding bicycles. Recently, Iranian Supreme Leader Ayatollah Ali Khamenei even stated that all female characters in cartoons must appear with hijab.

The Persian-language media close to the Saudi regime regularly highlight the kingdom's progress in giving women more freedom for the Iranian audience. This includes the news of the California-based Iranian pop singer, Leila Forouhar, performing at the 2020 Tantora Winter Festival, an event that one media outlet was at pains to note took place “without any restriction on women’s dress codes.” Among Iranians, however, there have been different reactions to this Saudi charm offensive, shaped by a combination of binary nationalist and religious narratives of Persian vs. Arab and Shi’a vs. Sunni.

For example, after the announcement that Saudi women would be free to drive, Iranian reformist news agency ISNA cynically published an op-ed titled “Saudi Women Can Drive, But Can’t Have Names,” referring to the social tradition whereby calling women by their name in public is considered indecent. Besides joyful and congratulatory messages, many Iranian social media users began to post images of old driver licenses to imply that Iranian women have been driving since 1940. Ironically, even after the Islamic Republic was established, the first driver’s license was issued to a woman with two incongruent symbols of the old and new regimes. Her last name was “Hezbollah-i” but her picture was without hijab, with her hair in a popular global hairstyle of the late 1970s.

However, when discussions in Iran turn inward and target the Iranian government, the response is rather different. For instance, the reformist newspaper Hamdeli, referring to the news that the music of Umm Kulthum would once again be played on Saudi TV, wrote, “It seems that we no longer have a country to compare ourselves to when it comes to inequality and discrimination against women; not even Saudi Arabia!” This point was reiterated by Shahla Lahiji, the first Iranian female publisher.

Iran and Saudi Arabia have different social fabrics, different historical trajectories, and different cultural practices. But, in an abstract form, which is reflected in global indexes, the conditions of women in both countries are equally terrible.

Meanwhile, women in both countries are trying to overcome political and social limitations. Two decades ago, women made up about 60% of Iranian university students, while today this number has decreased to less than 50%. A decade ago, Saudi women represented 58% of university students, while the current number is 55.8%. In both countries, however, women face gender discrimination if they choose majors that are considered only fit for men. And their economic structures don’t allow many educated women to join the workforce. According to the latest World Bank data, women make up just 15.8% of the workforce in Saudi Arabia and 19.5% in Iran.

The Saudi and Iranian states also exhibit the same political behavior in dealing with women’s rights activists. Loujain al-Hathloul, one of the most vocal activists in fighting for women’s right to drive in Saudi Arabia, was conditionally released after spending 1,001 days in prison, amid widespread international pressure on the government. There are still several female advocates in Saudi prison. In Iran, jail sentences were recently approved for two feminists who were trying to educate women on how to claim their existing legal rights in marriage contracts. Both countries even use the same rhetoric when it comes to accusing these activists. For years, the Iranian government has accused women’s rights activists of conspiring with “foreign enemies.” The Saudi indictment also claimed that women’s rights activists were “executing [a] foreign agenda” and the Saudi media went as far as calling them “part of an Iranian terrorist cell who were trained to target the kingdom.”

The Islamic Republic’s hardline media often cover the news of human rights violations and repression of social movements in the West in considerable detail, but the arrest and torture of Saudi women activists hardly get covered. Perhaps this is because they know all too well that chickens eventually come home to roost.

Feminism in Iran has historically overlooked the struggle of women in the GCC region, particularly in Saudi Arabia. Receptive to the Western orientalist discourse, it was often assumed that the Saudi society could not possibly generate any kind of vibrant and enduring feminist movement. The kingdom was only used as a trope to explain the way the Islamic Republic treats women, or as a warning of how much worse things can get. For example, in 2012 when hardliners in Iran’s Parliament, the Majlis, drafted a bill to prevent women under the age of 40 from leaving the country without the permission of a male guardian, Elaheh Koulaei, a former reformist MP, said in opposition that “they want to apply the Saudi Arabian style of living for women in Iran.”

This attitude has changed, however, given the recent advances in social freedoms in the kingdom and, at the same time, the prosecution of Saudi feminist activists. Iranian feminists have become more interested in monitoring the developments in Saudi Arabia.

Many Iranian women’s rights activists are conscious to avoid falling into the trap of comparative suffering. The editors of Bidarzani — an online feminist platform in Iran — told me that it is both the Saudi and Iranian states’ political agenda to get their people obsessed with arguing over which country is the worst when it comes to women’s condition: “Governments use such criteria for their battle of power, but it cannot depict the real picture of our societies.”

However, Bidarzani’s editors are highly skeptical about the top-down reforms taking place in the kingdom: “It is abundantly obvious that these reforms are nothing but window-dressing” when juxtaposed with “the state of imprisoned women’s rights activists, some of whom have even endured physical and sexual torture.” The editors of Digari — an online collective platform run by a group of women’s rights activists in Iran that focuses on discrimination against ethnic and religious minority women as well as immigrants — told me that Iranian women experienced this kind of “top-down reforms” several decades ago. They referred to the Iranian autocrat, Reza Shah, who in 1936 as part of his modernizing project issued a decree banning women from wearing hijab. A royal order “cannot change the minds of Saudi men at home,” Digari editors explained, adding that, “the order can get reversed as easily as it was decreed.”

Even though women’s rights activists in both countries have experienced living under religious authoritarian regimes, they have seldom established organic relationships. Language barriers aside, the prevailing clichés constantly reproduced by both states promote a distorted image of Iranian and Saudi women as the ultimate “Other,” contributing to a lack of interest in truly getting to know each other.

But it is the highly securitized environment in the two countries, and the precarious condition of women’s rights activists under state surveillance, that prevents them from communicating. A young Iranian feminist told me that she once met a Saudi feminist at an international conference and exchanged emails to stay in touch, but fearing the watchful eye of Big Brother, hid the email address somewhere so obscure that she could no longer remember where it is! The editors at Digari added that they are very concerned for Saudi activists: “Because of their attitude toward Iran, the Western governments often make more noise about the oppression of women’s rights activists, but they have never done the same for Saudi Arabia. This increases our concerns for the safety of Saudi women’s rights activists.”

Farnaz Seifi is an independent essayist and consultant who has worked at the juncture of gender and media with several international organizations and stakeholders in Iran, Europe, and the United States. She is also a Non-Resident Scholar with MEI's Iran Program. The views expressed in this piece are her own.