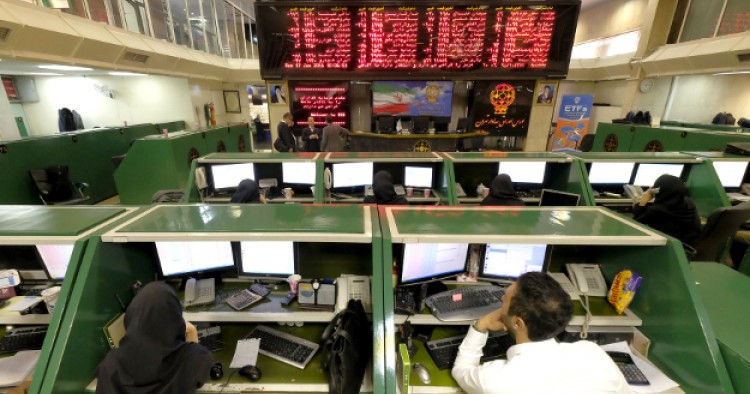 Choices made by Iran in the post-nuclear agreement period will entail a reappraisal of U.S. policy toward not only Iran but also the region. Iranian strategy has typically been governed by attempts to balance: (a) the domestic objective of sustained economic growth with preservation of the domestic political structure, and; (b) the external objective of securing a favorable regional strategic position. Over time, oil earnings and religious zeal have been used as the primary instruments to achieve these objectives.

There will, inevitably, be conflicts between the two objectives in the period ahead. Given the emerging economic constraints, notwithstanding the lifting of sanctions, a greater Iranian focus on targeting domestic growth would durably strengthen Iran’s economic position in a way that would be compatible with a regional approach emphasizing cooperation over confrontation. Pursuing regional strategic advantage, on the other hand, would be counterproductive, as it would cause resources to be diverted from productive to nonproductive uses. Such a scenario would, apart from deepening domestic political divisions in Iran, require a substantive recalibration of regional players’ strategies, as well as that of the United States. Steps that encourage Iran to strengthen domestic economic growth capacity, rather than pursue costly steps to establish regional strategic advantage, would be beneficial to most Iranians as well as to regional stability. 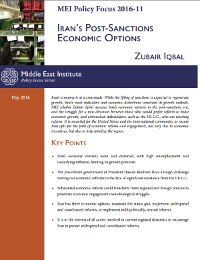 The Iranian economy is at a crossroads. Hard choices will have to be made in the wake of changing international conditions and the global oil outlook. The lifting of sanctions following the nuclear agreement has the potential to reinvigorate growth. Steps taken over the past few years have helped contain inflation, reduce some subsidies, and achieve a degree of exchange rate stability with some growth. However, the economy remains weak. Unemployment, especially among the younger generation, remains high. Prospects for the current year look better in light of the easing of financial constraints following the release of large official foreign exchange reserves, higher oil production, and improved market confidence leading to higher investment. Iran’s fiscal position will likely be consolidated further if planned revenue measures, including an increase in VAT and elimination of tax exemptions and a reduction in subsidies,  are implemented, which, combined with higher domestic production and imports, could further reduce inflation.

However, the Iranian economy is confronted with a dramatic fall in oil prices. It is compounded by the requirements of time-consuming and expensive investments in reviving output toward its pre-sanctions level of about 4 million barrels per day and rising domestic demand. While an increase in oil output and related investment would help increase GDP, lower export prices will likely further weaken the external position and the budget. With limited prospects, at present, of any meaningful supply restraint agreement among the major oil producers, oil revenues for the next 3-4 years could be up to 30 percent lower than those projected on the assumption of a strong recovery in 2016. Similarly, there would be little accumulation of foreign exchange reserves that have served as a cushion against future uncertainties. In this event, there would be little room for expansionary policies to reinvigorate growth. Thus, downside risks to growth have increased.

At the same time, the Iranian economy is saddled with significant structural distortions that continue to constrain its growth outlook. Critical prices, including exchange rate and interest rates, are still out of line; the financial sector is burdened with large nonperforming loans; the private sector faces weak demand and inadequate availability of credit; and government arrears have accumulated while subsidies remain large. Public sector entities control a significant share of the economy and access to bank credit. Governance of the private sector and the business environment is inadequate and nontransparent, undermining private investment. Increased regional instability as well as uncertainty with respect to the implementation of the nuclear agreement further compound downward risks.

Broadly, Iran aims to accelerate economic growth under the existing political structure while simultaneously strengthening its regional strategic position. Within the Iranian political elite, however, lies two competing strands. One, as represented by the reformists and the technocratic government of President Hassan Rouhani, prioritize economic growth. As such, they are more inclined to seek a regional strategic balance and greater cooperation with outside powers in order to serve their economic agenda. If the authorities choose to liberalize the economy through widespread economic reforms, and reduce the role of the inefficient public sector, domestic political power would likely shift in their favor.

The second force, as represented the hardliners, the ruling clergy and the Islamic Revolutionary Guards Corps (I.R.G.C.), would prefer to retain the current economic structure, as these forces maintain a significant stake in the economy.

If additional resources are funneled to public sector entities, and by extension the I.R.G.C. and the clergy, under a broadly unchanged economic structure, the growth momentum will falter after an initial spurt.  These forces will retain their major stake in the economy, and their significant influence over Iranian policy, thus resulting in an assertive regional and foreign policy at the expense of domestic economic growth. Such a position will breed further regional instability without fostering domestic economic well-being.

Significantly, it is unclear if the current Rouhani administration, which came to power with the aim of liberalizing the economy, has enough power to undertake the needed major reforms. It did very well in the recent elections, but faces powerful and entrenched hardline interests. So far it has met success in some areas, such as stabilizing the exchange market, reducing some subsidies, and containing inflation, but it may have difficulties in accelerating the process. It is critical for the authorities to have room to advance reforms that would help it build popular support for the continuation of such reforms. International encouragement—and pressure—could be crucial.

Iranian authorities could pursue three broad strategies in the current circumstances: (a) maintain the status quo, (b) implement widespread and coordinated reforms, or (c) implement mild politically-neutral reforms. The third option would ease some constraints on private sector investment and fiscal consolidation in response to lower oil earnings, but leave the economic and political structure broadly unchanged.

Maintaining the status quo would generate an uptick in growth to about 4-4.5 percent in 2016/2017 from virtually no growth in 2015/2016 as additional resources are used to reduce shortages, payoff outstanding obligations, and get the stalled public sector projects moving. However, in an environment of lower oil prices, growth would slow down over the near and medium-term to a level that will leave the unemployment rate high. The unchanged domestic political power balance would allocate resources to favor regional strategic objectives at the expense of domestic economic objectives, and this will have negative effects on growth.

Under the second option of widespread reform, liberalization of the economy and an early correction of structural distortions would allow a sustained increase in growth, even with lower-than-expected oil revenues, picking up strongly over the medium to long-term. Such a growth dynamic will also enhance Iran’s capacity to manage risks associated with lower and unstable oil prices. The success of this strategy would crucially depend upon a shift in the domestic political power balance away from the supporters of the public sector-oriented command economy to the market-based stakeholders. Experience has shown that durable exposure to market forces, in and of itself, helps to create the needed shift in political power balance.

The third scenario, though politically least disruptive, will quickly devolve into a version of the first option. Steps to address politically benign issues, such as consolidation of the budget in the face of lower oil earnings and easing of barriers to private sector activities, might temporarily put a lid on domestic economic discontent. The ensuing uncertainty and intensified competition for political power to affect allocation of oil revenues would be counterproductive.

What Should Foreign Stakeholders Do?

If Iran pursues policy option (a) from the previous section, the United States should be making clear to Iran that regional aggression will be met by robust American and regional pushback. In addition, if major players were pressured from directly investing into the Iranian oil sector, it could help persuade the Iranian authorities to alter their strategy to more adequately address their domestic economic challenges and accept a regional strategic balance.

To encourage Iran to pursue policy option (b), U.S. and international entities should be supportive of such an approach. Cooperation with other regional oil-exporting countries to ensure a stable and realistic global oil price would restore traditional interdependence, helping to shift Iran into pursuing an external policy of regional accommodation and cooperation. Increased interdependence with the global market and higher foreign capital inflows would encourage Iran to pursue a less confrontational regional stance, thus facilitating regional stability.

In the event that the authorities choose to follow the third option, regional and global stakeholders may have to take steps to nudge the authorities toward a more activist policy stance. In particular, easing of trade restrictions and investment cooperation in the nonoil sector could be conditioned on domestic policy reforms. Similarly, accommodation by major oil producers in any production freeze arrangement to support oil prices could be an incentive for challenging policy reforms.

It is in the interest of all actors involved in the regional dynamics to encourage Iran to opt for scenario (b) and implement the needed economic policy and structural reforms. Decentralization of economic policy decision making and a greater role for the market in resource allocation, along with a reduced role of the public sector in the economy, are crucial. These steps would promote growth, raise employment opportunities, and support Iran’s integration with the regional and global economies. They would also further empower the moderate sectors of society that elected Rouhani in 2013 and scored strong electoral victories in the recent parliamentary elections.

Major trading partners, supported by the United States, international investors, and multilateral lending agencies can play an important role in this process. While domestic forces will dominate the debate over the use of less-than-initially-anticipated oil revenues, external forces can influence the direction of resource allocation and help Iran achieve its dual objectives.

Iran will remain dependent on external investment not only in the oil sector, but also in the development of technology-intensive activities in the nonoil sector needed to address rising unemployment of the better educated younger population. It is in the interest of foreign investors that they are supported by suitable market-oriented policies in partnership with domestic investors who are less encumbered by excessive regulation and controls.

Multilateral economic and financial agencies and governments of major investing countries can play an important role in the reform process. Agencies such as the I.M.F. and the World Bank can and should advise the Iranian authorities to effect the needed policy reforms; their stance can have an important positive effect on the private investment choices. Expedited membership in the W.T.O. and access to open global markets would complete the virtuous circle of economic liberalization and integration. A forthright stance to deter Iranian intervention aimed at altering the regional strategic balance can go a long way to influence decisions on resource allocation and rebalancing priorities toward domestic growth.

At the regional level, it is in the Iranian economic interest to collaborate with other oil producers to stabilize the oil market. Closer coordination of oil policy with the major Gulf oil producers would not only help improve Iran’s economic outlook, but also reduce regional tensions. The experience of informal cooperation with Saudi Arabia and other major producers on the regional oil policy in the 1990s is a useful example to emulate.