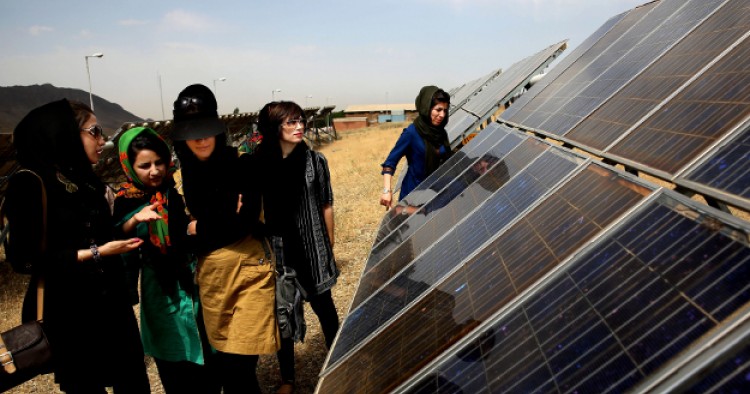 Boasting the fourth largest oil reserve and the second largest supply of natural gas in the world, Iran is a global hydrocarbons behemoth. Nevertheless, Iranian policymakers have shown great interest in renewable energy (R.E.) sources to improve energy security, reduce internal dependence on hydrocarbons, and meet its projected growth in electricity demand. The fulfillment of these objectives is not only realistic and desirable, but also probable for the Iranian government as it has an advantageous topography for renewables. Iran boasts a young and educated populace, and now has a relatively open channel to acquire the requisite renewable technology and project financing assistance.

The attractiveness of Iran’s R.E. potential has not gone unnoticed. As early as 2014, German, South Korean, Danish and Indian businesses began closely examining the sanctioned country’s R.E. industry as a long-term investment opportunity. Iranian officials responded with enthusiasm to Western curiosity by reducing bureaucracy in its energy sector, streamlining its licensing process, and presenting competitive incentives to R.E. infrastructure developers and equipment suppliers. For instance, the Renewable Energy Organization of Iran (SUNA) modeled its new feed-in tariff policy on the German equivalent[i], guaranteed government purchases of power for 20 years[ii], and introduced a 15 percent tax reduction for companies that use domestic components.[iii]

The Iranian Power Generation, Transmission, Distribution and Management Company (Tavanir) now estimates that renewables will generate around 10 percent of Iran’s electricity production requirements within five years. Iran’s Sixth Development Plan, a five-year government growth policy, includes a stipulation that its installed R.E. capacity should grow by 5,000 MW by 2018.[iv] Until recently, economic sanctions would have made achieving such an ambitious goal very difficult, if not impossible. However, due to the elimination of major restrictions on both domestic and foreign financing, investment goals of $10 billion by 2018 and $60 billion by 2025 now appear feasible. [v]

To realize this growing demand for power generation from R.E., Iran has unveiled plans to pursue the development of nonconventional renewable energy (NCRE) sources. This NCRE development includes increasing its solar and wind capacity in parallel for integration into its electrical grid; and encouraging new development of more conventional R.E. sources like nuclear and geothermal. Iranian companies and their partners face major obstacles such as aging or underdeveloped infrastructure, grid integration of R.E. resources, and a lack of expertise in certain specialized R.E. technologies.

Despite these challenges, there is substantial reason to believe that Iranian companies, in concert with foreign partners, will prevail. The Iranian government has already signed a series of agreements with foreign partners to facilitate development of new infrastructure and equipment production facilities later this year.

Iran’s energy mix is dominated by hydrocarbons. Natural gas and petroleum derivatives such as gasoline and fuel oil power traditional thermal power plants that satisfy around 98 percent of Iran’s total energy demand. The remaining two percent comes from a combination of hydropower, nuclear, biofuels and other renewable sources.

Overreliance on fossil fuel sources is a problem for a number of reasons. For one, Iran’s wealth of hydrocarbons has led the government to heavily subsidize fuels for individual energy consumption. At around 32 cents per liter[vi], the price of gasoline is near that of a bottle of mineral water in Iran, and at just 4.5 cents per kilowatt of electricity, citizens pay far below the global average.[vii]

Additionally, Iran spends $30 billion annually to fuel its thermal power plant infrastructure. It loses a meaningful percentage of this $30 billion each year because of antiquated and inefficient transmission and distribution infrastructure. According to Ali Mirmohammad, a senior consultant at Australian consultancy Frost & Sullivan, demand for electricity is growing at around 6.5 percent per year.[viii] This rate is currently at least 3.5 percent faster than the country’s GDP growth; this figure underscores that Iran cannot reasonably sustain the use of hydrocarbons to generate electricity nationwide. 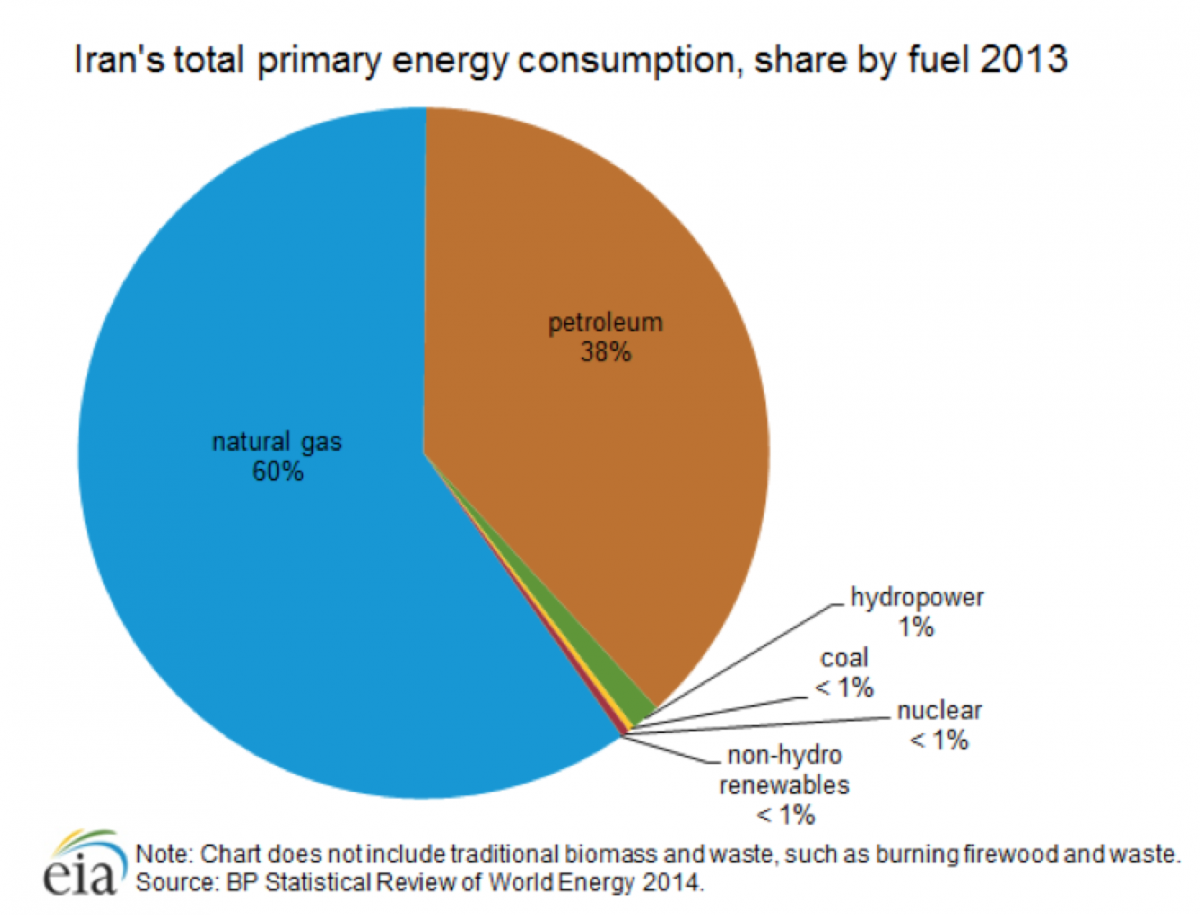 Hydroelectric power emerged as a renewable alternative in Iran in the 1950s. Iran, unlike most Middle Eastern states, is home to a vast network of rivers that allowed the country to rapidly scale its hydroelectric infrastructure until the early 2000s. Recent widespread droughts, however, have, greatly reduced Iran’s hydroelectric capacity.[ix]

Once contributing 14 percent of Iran’s base load energy supply, hydroelectric sources have been reduced to less than 5 percent, as river levels continue to fall. As a consequence, the deputy head of Tavanir recently stated that nearly all of Iran’s 50 hydroelectric plants have either halted generation or have seen their capacity diminished.[x]

With 100,000 MW[xi] of potential installed capacity, Iran’s wind power potential could rival that of major wind developing countries such as France and Britain. Unsurprisingly, the Iranian government has given wind power priority over other R.E. sources due to the country’s topography and existing manufacturing and production capabilities. [xii]

A 5,000 MW increase of energy capacity due to new R.E. is anticipated by 2018. Roughly 4,500 MW of that capacity is expected to come from utility-scale wind farms throughout the country. Due to its strategic location along several major wind corridors[xiii], including Atlantic, Mediterranean and Indian Ocean currents, Iran’s northwest and northeast experience high winds year-round. 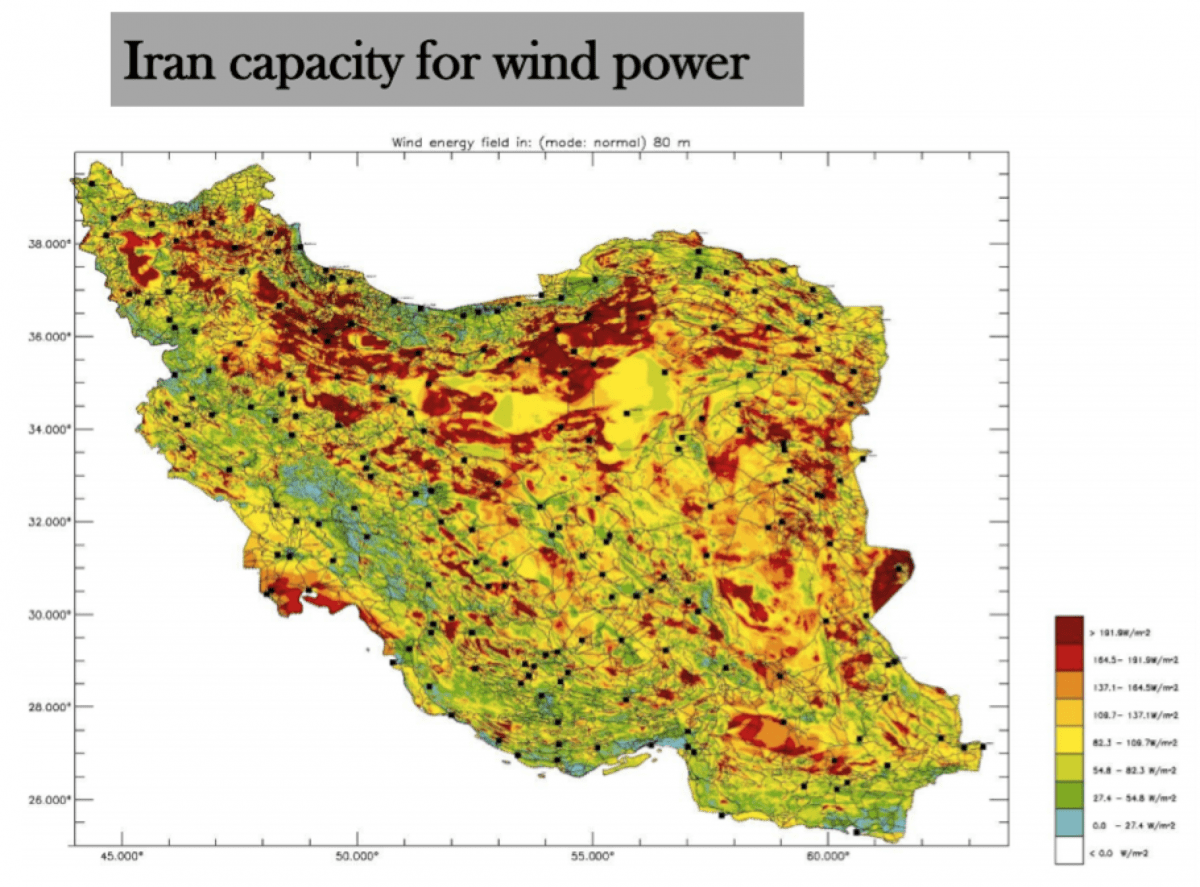 The relative consistency of these wind currents allows for sustainable access to wind energy that will significantly reduce the need for committing peak power thermal generators to daily power generation.

Iran is well-positioned to rapidly scale up its wind power sector. The country already operates 15 wind farms[xiv], and the vast majority of the components used to develop those farms were produced locally.[xv] Due to the impact of Western sanctions, the country has made use of its abundant human capital to develop technological capabilities in turbine, generator, and inverter production, and has even considered exporting this equipment to Azerbaijan and India.

Also working in Iran’s favor is its workforce: around 60 percent of Iranians are under the age of 30 and are comparatively well-educated. According to data published in the World Economic Forum’s 2015 Human Capital Index and synthesized by Forbes, Iran graduates more engineers than any other country surveyed except Russia and the United States.[xvi] These benefits, coupled with a 20-year-long Iranian government power purchase guarantee, have already had the effect of occasioning significant interest among foreign firms.[xvii] In September 2015, for instance, German-Iranian joint venture GI Umweltconsult reached an agreement with the Iranian government to construct a 48-megawatt wind farm in the southwest Iranian province of Khuzestan valued at $46 million.[xviii] Following a January 2016 visit to Iran by a Danish political and business delegation, Iranian Minister of Energy Hamid Chitchian also announced that Denmark would construct a wind turbine facility in Iran.[xix]

Iran’s Sixth Development Plan also provided for the installation of 500 MW of new solar capacity by 2018.[xx] Iran’s climate is diverse, and many of its regions are arid. Because the south, northwest and southeast regions receive around 300 days of sun per year, they are uniquely suited for solar energy.[xxi] The Iranian government has prioritized the central region in particular due to its climate and proximity to the national power grid. A series of deals with an unnamed German company to add around 550 MW of solar to the power grid were reportedly signed in August 2014 and are currently in development.

While Iranian policies for wind power are more aggressive in the short-term, plans for solar capacity are ambitious in the long-term. For instance, Iranian power developer Sunir and a Spanish company called Bester recently revealed plans to significantly expand Iran’s solar potential by 2020.[xxii] An additional 1,000 MW of solar capacity has been proposed by a consortium of Iranian, Indian and South Korean companies as part of a 10,000 MW “energy park” in the southwest, oil-rich Iranian province of Khuzestan.[xxiii]

The heavy involvement of foreign partners in solar projects is practical, as well as economical. A lack of access to key solar technologies like inverters for voltage control and appropriately advanced semiconductors has presented logistical challenges to domestic Iranian companies. With the recent removal of sanctions, Iranian companies now have greater access to a wider range of increasingly sophisticated solar technologies and financing to purchase and develop them. The immediate benefits will be their rapid installation and, in the long-term, the country is likely to benefit from gaining the ability to produce a significant amount of its solar infrastructure domestically.

Continued Development in Nuclear and Geothermal

Investments in more conventional sources of R.E. infrastructure are also underway. Iran has maintained a nuclear energy program dating back to the 1970s. Its Bushehr nuclear power plant still operates in the country’s southeast, near the Persian Gulf. Several areas of the country are prone to seismic activity, however, and consequently nuclear power does not have as geographically wide a range of applications as solar and wind, although its status as a contributor to Iran’s energy mix is undeniable.

Ali Akbar Salehi, the head of the Atomic Energy Organization of Iran, recently announced[xxiv] that the country will proceed with at least two new 1,000 MW extensions to the Bushehr power plant. To do so, Iran has brokered equipment and construction assistance agreements with Russia and China, and could add as many as eight new extensions to the Bushehr power plant.[xxv]

Iran has also begun development on the Middle East’s first geothermal power plant. This “pilot” station in the northwest Iranian province of Ardabil is expected to have an installed capacity of 50 MW. Because of its placement in the north of Iran, where infrastructure is underdeveloped and demand for electricity outpaces supply, the impact of the plant is expected to be immediate. While development of geothermal energy in Iran is comparatively inchoate, the potential is still significant. A study conducted by researchers at Stanford University, for instance, posits that development of geothermal energy in Iran is possible in 14 separate geographies, spanning nearly the entire country.[xxvi]

Iran’s energy diversification strategy has already begun to bear fruit. It has attracted hundreds of millions of dollars in investment in R.E. infrastructure and appears poised to attract billions more as Western economic sanctions are gradually repealed. The country has made a strong commitment to diversifying its energy mix and modernizing its infrastructure—a campaign that is bolstered by its willingness to collaborate with an array of foreign partners.

Iran’s path forward is not, however, free of potential pitfalls. In order to ensure continued financial support for its R.E. infrastructure, the country will have to demonstrate both political and economic stability. Doing this effectively will not be easy. Iran, like other resource-rich frontier markets, will almost certainly attract enormous foreign investment[xxvii] as the removal of sanctions continues to ease access to the country’s markets. If the country proves judicious and capable of channeling investment into key infrastructure, the benefits to the economy will grow exponentially.

If, however, bureaucracy and systemic corruption slow development, major logistical challenges such as grid integration and infrastructure modernization will be left unresolved, and outside interest in the economy will quickly wane. If this occurs, it is unlikely that Iran will transition from a low-medium income economy into a medium-rich one.

Due to its status as a tenant of the country’s economic growth strategy, the government is likely to maintain political support for R.E. development. According to one Iran analyst interviewed for research on this matter, “renewable infrastructure development is a crucial part of the economic program. The government views it as part of the infrastructure that will allow the country to grow. As such, support for it is unlikely to waver irrespective of who wins the [presidential] election in 2017.”

[iii] “The Rule of Public and Private Sectors in Renewable Energy”

[xiii] “The Potentials of Wind Energy Investment in Iran”

[xiv] “The Potentials of Wind Energy Investment in Iran”

[xvi]Forbes Business. “The Countries with the Most Engineering Graduates [Infographic].” http://www.forbes.com/sites/niallmccarthy/2015/06/09/the-countries-with….