Iraq: Maliki on the Way Out? 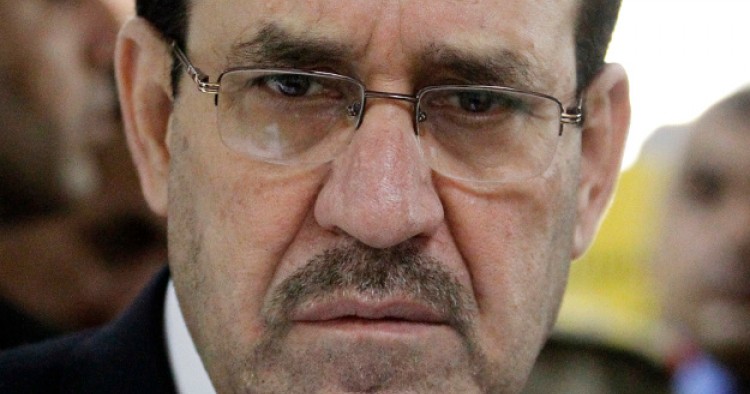 After a drought of news on Iraqi Prime Minister Nouri al-Maliki’s bid to stay in power, a July 22 Wall Street Journal (WSJ) article claimed he has run into real trouble. Now, not only Iraq’s Sunni Arabs and Kurds, but many Shia leaders, plus the Iranians reportedly realize Maliki’s re-election could be disastrous, possibly undercutting efforts to oust the Islamic State (IS) from its recent gains. Yet Maliki remains grimly determined to press ahead with his candidacy.

Iraqi officials with access told the WSJ that senior Shia politicians present at meetings with Iranian officials in Baghdad and the Shia holy city of Najaf said Maliki “had lost the confidence of all but his most inner circle.” Likewise, these officials said participating Iranian officials indicated that Tehran also had “really started to lean away from Maliki as a candidate.”

Iran’s position seemed confirmed by a July 23 Associated Press (AP) July report that none other than Iranian General Ghasem al-Soleimani recently told Maliki to abandon his effort to remain prime minister. Soleimani has been intensely involved in organizing Iraqi resistance to IS around the city of Samarra north of Baghdad that houses an important Shia mosque/shrine. Yet, Maliki reportedly rebuffed Soleimani.

Worse still for Maliki, three Iraqi officials associated with these discussions said Grand Ayatollah Ali al-Sistani, the source of emulation for most Iraqi Shia, wrote of his opposition to Maliki’s quest for a 3rd term as prime minister in a letter to the Iraqi leader last week. Sistani’s wish that Maliki drop out of the prime ministerial race (in this case relayed by an intermediary even earlier) likewise appeared to be confirmed by the AP via two Iraqi officials.

Quite apart from his apparent reaction to Soleimani, Maliki seemed unshaken in remarks released last Friday, asserting once again that since his State of Law (SL) bloc won the most seats in April’s parliamentary elections, he should get first crack at forming a government.

The process of government formation can begin now that Iraq’s largely ceremonial Iraqi president (traditionally a Kurd) — in this case Fouad Massoum — was elected on July 24. Massoum must formally identify the individual to be accorded the first shot at cobbling together a new government coalition.

Maliki’s insistence on being named in that respect was boosted on July 23. Iraq’s Federal Supreme Court ruled that his State of Law bloc had the legal right to go first.

One motivation driving Maliki may be fear. After years of serious, often extralegal abuses against his sectarian and political enemies and rampant official corruption, another government could delve into Maliki’s ugly record and place him in a lot more jeopardy than simply losing his job as prime minister.