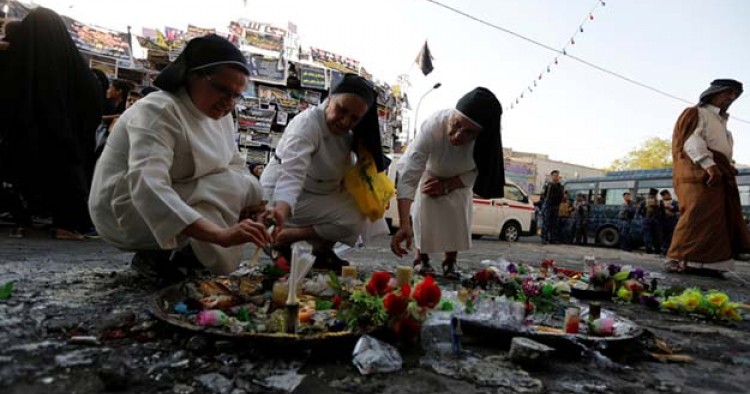 While the post-invasion map of Iraq is often conceived as a neatly trisected nation with a Kurdish top end, Sunni middle, and Shiite south, the reality is one of mixed marriages and common humanity.

Although the changes once-mixed and cosmopolitan Iraqi cities have experienced since 2003 are telling (see maps of changes to Baghdad neighborhood demographics since 2003), there are many people and projects that cross the post-invasion sectarian divide.

In the pre-2003 secular Saddamist state, it was considered bizarre at best, and often downright rude, to inquire about someone’s religious background. Many Iraqis—apart from those who benefit directly from post-invasion sectarian cronyism or who are employed by militias—still refuse to identify as anything but “Iraqi.”

There are some tenacious N.G.O.s, like al-Amal—run by Hana Edwar, an Iraqi Christian woman—that link women from across sectarian lines in their struggle for basic rights and freedoms. Hala Saraf’s Iraq Health Aid Organization (I.H.A.O.) works with those displaced by sectarian terror and benefits from many young volunteers who come from across ethnic and sectarian divides. And, of course, the ongoing protest movement against government corruption, while often exploited by sectarian leaders like Moqtada al-Sadr, still crosses gender, class, and sectarian lines.

But now, Baghdad has become the site of the worst sectarian violence in recent months. The terrible bombing in Karrada that killed over 200 mainly young people during the holy month of Ramadan has itself been transformed into a symbol of hope and solidarity.

The site is part of a 3.5 square kilometer area encompassed by a 1981 plan for the larger Abu Nuwas area designed by the late Canadian architect Arthur Erickson, which includes public gardens and cultural centers along the Tigris. Iraqi architect Mowafaq Altaey who has been an advisor to two post-invasion mayors of Baghdad on the difficult task of reintegrating once-mixed neighborhoods, worked on the 1981 project before the Iran-Iraq War foiled its implementation. Now, he hopes to revive the plan, especially its much-needed public, non-sectarian recreational green space.

“Abu Nuwas,” Altaey explains from his home in Baghdad, “is a spine linking different areas, including Karrada, Bataween, and Sadoun Street” and, in that way, has great potential to “connect people.” Erickson’s plan, he contends, was to create a common public space for people of different backgrounds, as well as for cultural, scientific, and other activities that bring people together. A key point, especially in post-invasion Iraq, he notes, is that “Abu Nuwas is not a religious, but a secular space—and now we are in great need of such spaces.”

While the bombing site itself quickly became a makeshift shrine that brought Shiite and Sunni Muslims, Christians, and other Iraqis together in a show of solidarity, with candlelight vigils and spontaneous sidewalk art, more formal plans have now emerged for the area.

Ghada Alsilq, head of the architecture program at the University of Baghdad, is working with the mayoralty on a competition to redesign the buildings destroyed by the blast in July and to transform the surrounding area into a pedestrian plaza. Students from the university, many of whom are also volunteering with street cleaning and revitalization of neglected urban areas, will have the opportunity to suggest designs that will facilitate public space and integration of different communities.

“Some people with sectarian agendas,” notes Alsilq, “have been pushing to say that most of victims were Shiite, and that Karrada is a Shiite area. But the feeling among the students is that we are all targeted and need to be united.”

The best way to ensure security, she notes, is through “unity and solidarity.”

“Here in Baghdad we still celebrate each other’s holidays, like Easter and Ramadan, as one community. The idea you have in the West is related to the political people who talk in sectarian terms for their own agendas.”

The designs for the bombing site in progress, says Alsilq, examine questions like: What do we want people to remember about the tragedy, and how do we want them to reflect on the future?

“There is a general feeling,” says Alsilq, “that life should be stronger than death” and that “we need to escape the trap of sectarianism.”

The design competition itself, she says, will be a “catalyst” to bring disparate groups together. Students are considering ways to revive the burned out buildings on the site, including, as was popular in post-war Beirut, preserving some features of the wrecked infrastructure and incorporating them into the design. Gardens, plazas and pedestrian areas are also being discussed.

Already, says Alsilq, young volunteers from across sectarian lines are cleaning and reviving historical areas around Rashid Street and Mutanabe Street, and “the mayoralty depends on them.” Plans for pedestrianizing these areas, which she is exploring for the city, will also assist with preservation of architectural heritage. Plans are afoot for public art, as well and music and theatre, across the city for the upcoming “Baghdad Day” on November 15.

Another independent initiative by a group of Iraqi artists from across the country is preparing a series of exhibitions, installations and performances on the site of the Karrada bombing at the end of August.

Lead artist Riyadh Hashim, whose own work has often explored the intersection between traditional Shiite shrines and ongoing violence, is a professor of art at the University of al-Qadisiyah and will be working with artists and colleagues from Basra, Babylon, and Baghdad. He has also invited international artists to participate.

He has asked artists for their individual interpretation of the bombing, exploring themes related to death and mourning but also to hope and solidarity. “We are working without sectarian or political affiliation,” he says, “The tragic event is the catalyst for this work, but we hope it will be an exploration of our common humanity as Iraqis.”