ISIS and the Institution of Online Terrorist Recruitment 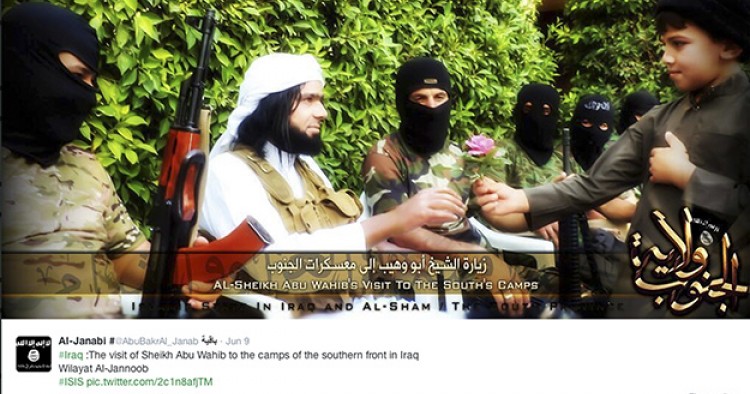 This series explores the threat posed by the rise of ISIS to Asia, particularly Southeast Asia, and efforts that the governments of the region have taken and could/should take to respond to it. More ...

The rise of ISIS and associated jihadi violence taking place in Syria and Iraq has reverberated widely. The effects can be felt not just in the horrific attacks that took place in Paris in January 2015, but across the Asia-Pacific region as well, including Australia. Public officials and analysts are struggling to understand and devise countermeasures to the recruitment mechanisms employed by ISIS and other violent extremist groups. This essay explores the role that social media has played in ISIS’s efforts to attract adherents.

In June 2014, ISIS had gained control of a large section of northern Syria as well as the Iraq-Syria border area.[1] The next month the group rebranded itself “the Islamic State,” and their area of control was termed an “Islamic caliphate.”[2] From July to September 2014, ISIS continued to dominate international security news. Massacres continued, and beheadings of journalists and an aid worker were posted on social media.[3] The photo of an Australian child holding a decapitated head became a grim emblem of the group’s barbarity. Australian intelligence sources revealed that about 60 Australians were fighting for ISIS, and in September Australia’s largest-ever terror raids thwarted an alleged terrorist plot to publicly behead a random member of the public.[4] Governments around the world came to see ISIS as a major threat to global security, leading to air strikes against the group’s positions starting in September. These strikes are U.S.-led, with the support of Australia and other U.S. allies.

Researchers and analysts around the world are still trying to understand how ISIS so quickly replaced Jabhat al-Nusra as the predominant militant group in Syria and then made such swift advances in Iraq. Although many types of economic and military resources were required for this rapid expansion, the key to ISIS’s success has been its human resources: the continual addition of new recruits.

Those who conduct acts of terrorism often have jihadi links that are unrelated to social media.[5] However, online influences, and social media in particular, are also significant factors in most cases. Recent models of online radicalization have separated the propaganda mechanisms of YouTube from the more interactive dynamics of social media platforms, in particular Facebook.[6] While ISIS propaganda on YouTube, especially the beheading videos, have received the most mainstream media attention, these form only a small part of the overall radicalization strategy for jihadi recruitment.

In fact, social media has become a critical recruitment mechanism for ISIS. This essay will therefore examine the specific characteristics of social media that have made it such an effective tool for attracting new followers. First, social media provides a stage on which ISIS can perform its recruitment-oriented “theater,” presenting a carefully packaged image of itself as the fulfillment of a kind of ultimate jihadi fantasy. Second, social media constitutes an institution wherein extreme beliefs and actions are “normalized,” or made to seem the standard practices of dedicated Muslims. Third, ISIS uses social media to develop and disseminate its central narratives, often by reframing familiar concepts such as jihad and martyrdom.

Recruitment by Way of Jihadi “Theater”

The theatrical aspects of ISIS’s recruitment efforts have received a great deal of mainstream media attention. ISIS has cast itself as the proponent of an expansionist philosophy and the vanguard of a movement committed to the establishment of an Islamic caliphate. Unlike al-Qa‘ida, which acknowledged the importance of keeping the local population on its side, ISIS has ruled by instilling fear. It offers, for example, two stark choices to those people under its control who are not Sunni Muslims: forced conversion or death. The targeting of the Yazidi community—through indiscriminate killings, gang rapes, and the sale of women to jihadi fighters—is another illustration of this tendency to terrorize subdued populations. Inducing terror through shocking public displays of power apparently constitutes a core element of ISIS’s strategy. These events, packaged into perversely dramatic “theater” productions, are then broadcast via social media in an attempt to capture the attention of an “audience” sitting at computers scattered around the globe.

When dispersed via interactive social media, the imagery and ideology contained in this “theater” implicitly “normalizes” extreme attitudes toward concepts such as “jihad” and “martyrdom” by permitting the audience members to feel included in virtual groups of like-minded individuals.

ISIS’s success at recruiting Western fighters is particularly unexpected and illustrates, in part, the potency of its online “theater.” It should be noted that Western recruits are asked not only to support the group’s initiatives in the Middle East but also to execute ISIS’s fatwas in their home countries. Therefore, jihadi returnees are not the only potential threats; supporters of ISIS who have never left their home countries may in fact be capable of acting on ISIS’s behalf in the future. Ominously, such individuals are generally “off the radar” of current surveillance.

ISIS’s deliberately crafted public relations campaign has made social media sites—especially Facebook—a minefield for young, marginalized Western Muslims, some of whom may be vulnerable to indoctrination through exposure to the graphic imagery of ISIS’s “pure” Islam. Continued exposure to this extreme “theater,”—such as posted pictures or videos of actual Muslim Australian citizens beheading “infidels” in Iraq (or Australian children posing with severed heads), even while claiming to be living under “righteous Islamic rule”—encourages vulnerable, marginalized Muslims living in the West to redefine “righteous rule” in terms dictated by ISIS. Recent YouTube videos even show ISIS training young children to fight to defend the newly built “Islamic State.”

Recruitment as an Institution

Despite the appeal of such theater for some, it takes much more than imagery to radicalize individuals to the extent that they embrace violent jihad, at risk to their own lives. Social media also acts as an institution, guiding the psychological changes that underlie radicalization. In fact, all types of mass media have been recognized as an important social institution competing directly with more traditional ones, such as schools.[7] Many in the West are suspicious of the mainstream media, which may lead some to consider narratives from the margins, such as those purveyed by ISIS. To make matters worse, a significant number of individuals lack the critical literacy skills to discern and filter content.[8] It is possible to understand the institution of media as a producer and distributer of symbolic goods.[9] While sites like YouTube are used to distribute symbolic goods such as images of beheadings, the images’ primary method of dispersion is via Facebook and its associated links.

In characterizing social media as an institution that can trigger personal transformation by distributing symbolic goods, it is important to first outline the key characteristics of an institution:

Michel Foucault offered particularly relevant insights on how power functions within an institution.[10] Rather than seeing power as a top-down entity belonging to those in authority, he viewed it as networked and flowing through a multitude of individuals at various levels. This view is highly consistent with the way the Internet is structured, social media platforms in particular. In addition, Foucault suggested that power was based around knowledge or narrative structures rather than people.[11] It is these narrative structures that form the basis of the institutional message.

ISIS’s discourses combine to form a series of narratives that are in fact quite coherent. Researchers have consistently refused to label terrorists as psychologically ill or irrational, and social media posts indicate that while some of their aspirations (such as taking over the White House) are unrealistic, their overall narratives tend to be well-developed and internally coherent. [12]

Foundational to ISIS’s discourse are grievance narratives.[13] These contain a strong ethical focus on the many injustices that Muslims have been forced to endure. Importantly, these grievances are not isolated in a single geopolitical context. Each situation forms part of what is perceived as an overarching attack on Islam.[14] ISIS insists that it has the right and duty to set up an Islamic state ruled by strict Islamic (Shariah) law. Whether due to past or current actions or inaction, Western powers are generally highlighted as the primary oppressors, the United States in particular.

Islam is a religion with an embedded political dimension. This fact has been exploited by extremists to cultivate among their recruits a sense of obligation to take action. Jihad is then centralized as the expression of this obligation. Jihad is explicitly portrayed as a military struggle, and this stance is supported by many forms of evidence—including the Qur’an, the Hadith, statements by prominent radical scholars, and fatwas that relate to specific political situations such as the Syrian revolution.[15] Social media evidence indicates a constant narrative highlighting the centrality of jihad within the life of a “true Muslim.”

Joining any form of armed struggle is by definition a high-risk act. Rather than attempting to analyze, avoid, or minimize this risk that comes with militant jihad, ISIS employs a discursive strategy that embraces risk and even encourages recruits to seek out death. Not only is the concept of martyrdom emphasized; it is used to explicitly contrast Muslims with those in the West who avoid death.[16] A natural progression from jihad to martyrdom is thus outlined, with the willingness to die portrayed as a form of strength, an advantage possessed by Muslim warriors.

The process through which these narratives are circulated enhances their power. Traditional media sources are producers of information that provide their product to consumers. In contrast, social media uses a much more informal, network-based approach. Each user operates as both a consumer and producer of information. Many extremists collect “data” around the main narrative themes of grievance, jihad, and martyrdom. While this narrative data is widely collected from many sources, including mainstream media at all levels, formation of discourses relating to jihad and martyrdom tends to be more restricted.

Extremist Islamic discourses, which have been widely circulated on social media since 2001, intensified with the outbreak of war in Syria. While the Syrian conflict provided opportunities to act in a resistive context, with the formation of the “Islamic State” in Iraq, ISIS branded itself a “creative”—not merely reactive—jihadi movement. As depicted online, the newly established “caliphate” becomes a powerful form of “theater" that reinforces the ultimate jihadi fantasy. In other words, social media has become a means of institutionalized socialization, drawing in new recruits by dispersing potent narratives around the globe. While YouTube is the key delivery mechanism for ISIS’s imagery and “theater,” it is social media platforms such as Facebook that allow for interactions and socialization, including the delivery of extremist narratives. By better understanding these mechanisms of radicalization, authorities around the globe can develop more effective strategies for countering ISIS’s highly successful recruitment campaign.

[2] Eryk Bagshaw, “Timeline: How the Islamic State Grew to Be a Local Threat,” The Sydney Morning Herald, September 18, 2014.

[3]  Bagshaw, “Timeline: How the Islamic State Grew to Be a Local Threat.”

[4] Bagshaw, “Timeline: How the Islamic State Grew to Be a Local Threat.”

[9] John B. Thompson, The Media and Modernity: A Social Theory of the Media (Stanford: Stanford University Press, 1995).