Is ISIS the real winner of Hifter’s Tripoli offensive? 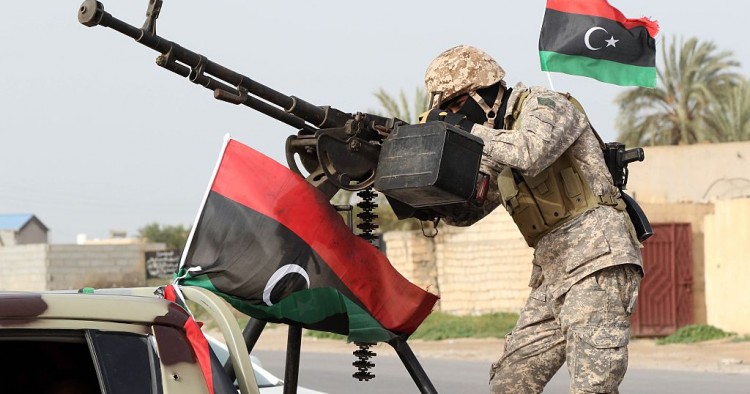 The launch of General Khalifa Hifter’s campaign to retake Tripoli in April has intensified Libya’s political upheaval and created the conditions for a potential resurgence of ISIS. The onset of the Libyan civil war in mid-2014 gave rise to a power vacuum that enabled the group to establish a presence in Libya, and while ISIS was eventually driven out at the end of 2016, the current political instability could give it an opportunity to regroup and re-establish itself — with major ramifications for the country and the broader region.

Until a political settlement is reached, the ongoing cycle of violence in Libya will continue. As was the case in other Arab states such as Iraq, Syria, and Yemen, extremists are the best positioned to capitalize on the chaos in Libya to gain influence. As more Libyans are killed, injured, or displaced by fighting, there will be more grievances that radical forces can exploit for political, social, and ideological purposes. As a result, ISIS has a stake in playing a “spoiler role” with respect to efforts by the UN and other players to seek a peaceful resolution to the conflict.

The rise of ISIS in Libya

The outbreak of civil war in mid-2014 split Libya between two main power centers in Tripolitania and Cyrenaica with rival governments in Tripoli and Tobruk, and this upheaval gave ISIS an opportunity to set up a local branch, replicating the model it used in Syria and Iraq. The fighters who joined its ranks included battle-hardened Libyans, many of whom had previously fought for Ansar al-Sharia, an al-Qaeda offshoot that established itself in eastern Libya after the 2011 revolution, as well as ISIS’s franchise in the Levant. Yet ISIS in Libya was mostly a foreign force: Almost three-quarters of its fighters were non-Libyan, mainly from Tunisia and other North African states, and its leader, Abu Habib al-Jazrawi, was a Saudi national.

Throughout 2015, ISIS took over Sirte and established governing units elsewhere too, such as Derna, Benghazi, and Sabratha. At its peak in 2015-16, the group had 4,000-7,000 members and controlled around 200 kilometers of coastal territory. At the time, ISIS’s chief goals were disrupting Libya’s hydrocarbons exports, consolidating its military gains, and expanding its territorial control. After a seven-month-long fight, in December 2016, the U.S. military and its local partners on the ground — mainly Muslim Brotherhood-linked fighters from Misrata in the al-Bunyan al-Marsous — “defeated” ISIS in Sirte, removing the extremist group from its last stronghold in Libya, at least for a time.

The resurgence of ISIS

Fast forward two and a half years and Libya’s deep political divisions have once again given ISIS an opportunity to establish itself in the country. Just as in 2014-15, when its enemies were too busy fighting one another to confront it, the conditions in Libya are again ripe for ISIS and other extremists to exploit.

To be sure, after its defeat in Sirte in late 2016, ISIS did not disappear from Libya. Instead, it shifted to waging a “war of attrition,” fighting guerrilla warfare in the lawless desert, using sleeper cells, and carrying out symbolic attacks on state institutions, rather than seeking to govern territory as a de facto state. Between March 2018 and March 2019, ISIS carried out suicide attacks and bombings in Tripoli, targeting Libya’s Foreign Ministry, the National Oil Corporation (NOC), and the High National Electoral Commission. The group was responsible for a total of 25 attacks in Tripoli and the south of the country in 2018, all of which targeted the internationally-recognized Government of National Accord (GNA).

By March 2019, Libya’s interior minister was issuing warnings about ISIS again, noting that a lack of help from Washington would increase the odds of the terrorist group capitalizing on the chaotic conditions to regroup. The following month, events made clear how real the risk was.

In April 2019, General Hifter and his Libyan National Army (LNA) forces launched a westward offensive to “liberate” Tripoli from Muslim Brotherhood-linked groups and other Islamist factions that have controlled the city for years. Since the campaign began, ISIS has carried out four attacks against the LNA, marking a shift in the extremist’s group’s strategy and priorities from last year, when it focused its operations on the GNA.

On April 9, four days after the launch of the LNA’s assault on Tripoli, ISIS reportedly attacked Fuqaha, a town controlled by Hifter’s forces in central Libya, kidnapping one person and killing three. Afterwards, Amaq, ISIS’s official media outlet, put out a statement claiming responsibility for the attack, ISIS’s second in Fuqaha in six months. In May the tempo of attacks increased sharply. On May 4, ISIS militants claimed responsibility for an attack on an LNA training camp at the Tamanhint air base in Sabha, in the Fezzan region, which killed nine people. On May 9, it carried out a hit-and-run attack during daylight hours in Ghadwa, the largest city in southern Libya, killing three, kidnapping one, and destroying a number of houses. On May 18, ISIS struck again, killing two guards and an LNA solider at the Zella oilfield, 470 miles southwest of Tripoli, and kidnapping four others.

Despite the real threat that ISIS poses to Hifter’s forces, the eastern commander may prove successful in capitalizing on the extremist group’s attacks for political purposes. As Hifter continues to portray the LNA as the sole force in Libya that is committed to combatting terrorist groups and militant Sunni fundamentalism, ISIS’s focus on attacking the LNA will only help his narrative.

As the crisis in Libya worsens and the prospects for diplomatic resolution dim while violence intensifies, the odds are good that ISIS will continue to carry out attacks from the shadows. The fighting in and near Tripoli will likely create new power vacuums that the group will try to fill and grievances it can exploit. Much like in 2014-16, with both the Tripoli and Tobruk governments channeling their resources toward the fight between GNA and LNA forces, ISIS will have freer rein to operate. If Tripoli-based militias are focused on fighting Hifter’s forces, they will likely have less success tracking down ISIS sleeper cells. Having said that, on May 26 the Ministry of Interior in Tripoli said that GNA forces had arrested an ISIS commander, Amir al-Hisbah, the previous month.

The stakes for Libya and the region

The resurgence of ISIS presents a grave danger for many parties with stakes in Libya’s civil war. Doubtless, Libyans themselves have the most to lose from the re-emergence of a violent group that has repeatedly committed atrocities and grave human rights violations. When ISIS first established itself in Libya, it caused international alarm by carrying out public executions, beheadings, floggings, and amputations, including the barbaric killing of 21 Egyptian Coptic Christians in a propaganda video.

The group’s re-emergence would also have wider repercussions for the region, unsettling neighboring Tunisia, where the group’s Libyan branch had operational reach in 2015-16. For Europe, too, the stakes are high. Not only would an ISIS presence in Libya pose a direct security threat to EU member states, but it could also trigger a rise in migration across the Mediterranean and disrupt the flow of oil, while further complicating international efforts to make peace in the war-torn country.

For international actors seeking to help stabilize Libya, preventing the resurgence of ISIS is key. Doing so will require addressing the underlying root causes, but that seems impossible as long as fighting persists and the LNA seeks to achieve a military victory. Hifter’s offensive against Tripoli and fight with the GNA-linked Islamist militias have created new conditions on the ground that are heating up the conflict, resulting in myriad security, political, economic, and social problems that give ISIS fuel to sustain its fight. More Libyans may become vulnerable to the trap of radicalization if they begin to see ISIS as more likely or able to create stability and order than either the ineffectual GNA or Hifter’s forces. Thus, ISIS may prove to be both a cause and effect of the Libyan parties’ inability to reach a peace deal to resolve the civil war.

Giorgio Cafiero is the CEO and founder of Gulf State Analytics, a geostrategic consultancy based in Washington, DC. The views he expresses are strictly his own.