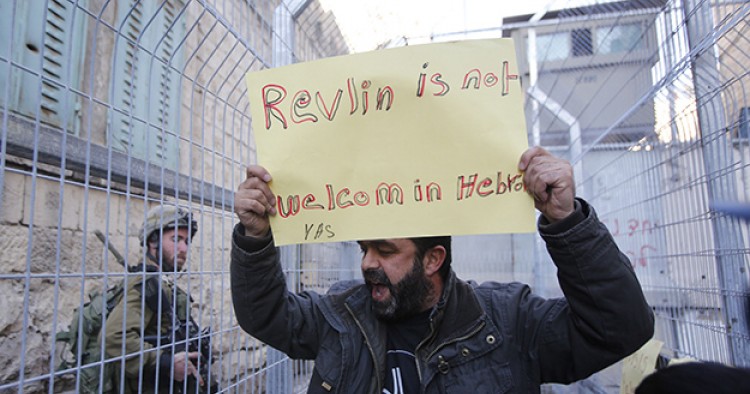 Israeli President Reuven “Ruby” Rivlin was recently asked about the prospects for a two-state solution to Israel’s long conflict with the Palestinians. He described this concept for building a future between Israel and its neighbor as “irrelevant.” Indeed, he claims to have said as much to President Barack Obama when they last met.

What does “irrelevant” mean in this context? The dictionary lists as its synonyms “immaterial” or “beside the point.”

Rivlin, in the mold of his ideological and political mentor Menachem Begin, has made no secret of his preference for Israel’s outright annexation of the West Bank and the continued maintenance of Gaza in permanent political limbo. But supporting annexation as a preferred option for resolving the conflict is one thing; declaring the subject of two states as irrelevant is something else entirely.

Rivlin is all too aware of the extraordinary importance of his statement. He does not merely oppose the search for a consensual diplomatic solution along the only lines able to win formal international backing. More significantly, he sees such an effort—supported by an international consensus, however brittle—as outside the scope of realistic possibility, akin to colonizing the moon.

Rivlin has spent a political lifetime pursuing the goal of removing the option of Palestinian sovereignty in Palestine from the realm of possibility. This objective—creating ‘facts on the ground’ that friend and foe alike will have no choice but to recognize and accommodate—is at the heart of Rivlin's political worldview, first articulated by the father of the Zionist Betar nationalist movement, Ze’ev Jabotinsky, a century ago.

Next year, Israel will celebrate, and the Palestinians will mourn, half a century of occupation and settlement. Rivlin’s dismissal of a negotiated solution is a declaration of victory. And indeed, Rivlin and others, like Minister of Agriculture Uri Ariel, are focused on how to manage Israel’s integration not only of West Bank territory but also its 3 million Palestinians.

“We have to aspire to the annexation of Area C; these are areas where there are no Arabs at all,” Ariel said in early June. “We would remove a few thousand, who do not constitute a significant numerical factor.”

The diplomatic front pursued by the international community is an unreal world apart from this sober reality. The Netanyahu government wears with pride the fact that Israel’s soon-to-be longest serving prime minister has spent only some few inconsequential hours in discussions with P.L.O. chairman Mahmoud Abbas.

This parched diplomatic landscape engulfs every player. For the first time in modern memory, there is no U.S.-led process of diplomatic engagement, let alone a substantive dialogue where hard decisions are made. The Obama administration is out of ideas and out of energy. There is no Rogers Plan on the table or even in the diplomatic refrigerator. Egyptian President Abdel Fattah el-Sisi has caused a stir by some impromptu remarks in favor of dialogue; ditto for Netanyahu’s wink in the direction of the Arab Peace Initiative. With all due respect to these and current French efforts, there is presently nothing resembling a serious discussion on the model of the post-October War or Madrid models. There is not even a hint of Washington’s interest in emulating Jimmy Carter's aggressive shepherding of an Egyptian-Israeli peace treaty or in resurrecting the false promise of a U.S.-mediated bilateral dialogue a la Oslo, which died with Operation Defensive Shield and Israel’s reoccupation of Area A in April 2002.

The last agreement between Israel and the P.L.O. remains the unexecuted Wye Plantation agreement of 1996, close to a generation ago. The best that the Obama administration can muster in response to the ongoing news of settlement expansion, the latest being 82 new dwelling units in the East Jerusalem suburb of Ramat Shlomo, is what one reporter humorously described as the State Department's “robotic” response:

“Our longstanding position on these kinds of actions in East Jerusalem as well as in the West Bank,” explained deputy spokesman, Mark Toner, ”is very clear. We view this kind of settlement activity as illegitimate and counterproductive.” End of story.

To the extent that there are hopes for the remaining months of the Obama administration, they are currently focused on a diplomatic Hail Mary—a set of ‘Obama Parameters’ to guide, if not commit, the incoming administration.

In contrast to the diplomatic efforts that have fallen woefully short, the drive of occupation, permanent rule, and settlement has proceeded apace, creating a reality that Rivlin, and not he alone, sees as far more instructive about the future than the half-hearted attempts to revive an inaptly named ‘peace process.’

And with good reason. The sustained opposition of the international community, not to mention Arab protagonists, has been to borrow and repeat words, which are all but irrelevant to the single-minded, day-to-day conduct of Israel’s settlement policies, undertaken by governments Left and Right without pause for close to five decades.

In the face of unanimous but ineffective international opposition, wars, and intifadas, Israel has settled close to 600,000 Israelis, 8 percent of its entire population, into areas of the West Bank and East Jerusalem, where its sovereignty is not recognized. To international applause, Palestinian consent under the Oslo Accords placed close to 60 percent of the West Bank (Area C) under Israel’s exclusive jurisdiction, creating a huge land reserve for settlement expansion and removing the territorial basis for Palestinian sovereignty in the West Bank.

Except for Gaza, where Hamas now rules uneasily, this reality grows and prospers.

President Rivlin has thrown down a formidable gauntlet—to the Arabs, the international community, and not least of all to the Israeli people themselves—placing the burden of change on those seeking to end decades of occupation and settlement, rather than upon those, like Rivlin, who revel in its achievement.