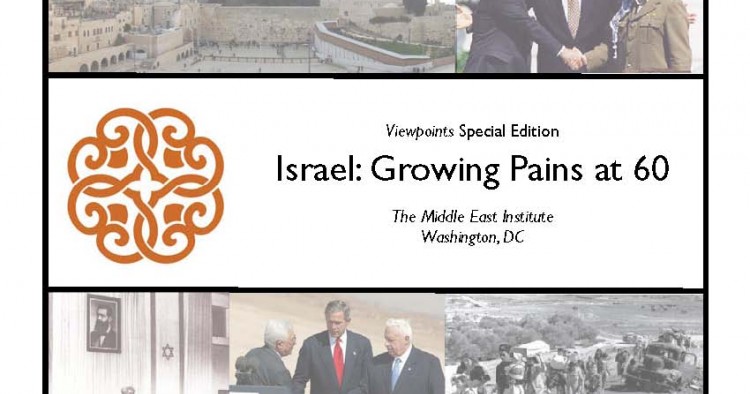 Within a mere few years after World War II the Middle East was remade. The creation of the State of Israel in 1948 and its consequences helped propel that part of the world to what seems to be a permanent and unenviable spot on any list of world crises.

Shortly before that momentous year, two other events of rather lesser moment that have nonetheless had a continuing impact on the Middle East occurred, namely, the establishment of the Middle East Institute in 1947 and Don Peretz’s arrival in Palestine the year before, to begin his studies in the then minuscule field of the modern Middle East. The two have been associated for almost the whole time since, both providing an eclectic perspective on the Middle East, but each starting from a very different point. MEI was founded by Arabists (back when the word had some meaning), most of whom had served in the State Department, and some of whom had grown up in the Arab world themselves. Don Peretz, in contrast, was the scion of an old Middle Eastern (Sephardi) Jewish family, whose interest in the region was piqued by his Jewish connection.

Much of Don’s work throughout a lifetime of teaching and publications has been dedicated to the Arab-Israeli conflict and its ramifications. What particularly distinguishes his contributions is his hard-headed empathy for both sides — a quality that was (and in some respects still is) rare and refreshing. From almost being tried for espionage by Palestinians in 1948 (when they discovered he was Jewish) to being regarded with suspicion by much of the Jewish establishment for most of his career for being too open to Arab viewpoints, Don has put forward a perspective informed by the conviction that recognition of the real grievances of both sides is essential for successful peacemaking, an insight that is still the key to any possible settlement. MEI is proud to have been associated with Don Peretz through its entire history and his distinguished career.

MEI’s contribution has been to provide a forum for responsible, yet widely diverging views through policy-relevant scholarship and education. From its beginnings, and more fully from the 1960s on, The Middle East Journal has published Israeli and Israel-oriented scholars on any number of topics related to the country and its issues as part of its mission to cover the entire region. In the last few years, it has hosted as Resident Scholars such distinguished Israeli academics as Moshe Ma’oz and Yoram Peri, while also providing an intellectual home for me when I returned from Israel, as well as for many others.

This collection of essays follows in that tradition by presenting a variety of subjects and viewpoints from a distinguished group of scholars to mark Israel’s 60th birthday. Most, quite properly, are directed at issues other than “the conflict,” but its presence, of course, informs almost all of them, as it does so many aspects of life in Israel. And, no one could reasonably claim that they represent a limited perspective on anything. As the field of Middle East scholarship is shaken by political and methodological rifts, and as many academic institutions are establishing separate “Israeli Studies” and “Middle Eastern Studies” institutes, MEI maintains its insistence on providing a variety of viewpoints on issues. While by no means any longer the sole institution in Washington focused on the modern Middle East, it has preserved its mission to provide different perspectives to inform policy, scholarship, and the education of the general public, as the region has become ever more visible to Americans.

My first visit to the country before it became Israel was in 1933 when I was eleven. My family had lived there for generations, since the expulsion of Jews from Spain during the Inquisition in 1492. By the 20th century, just a remnant of Ladino-speaking Sephardim remained in the Ottoman Empire. Today only a handful can remember the Ottoman era. When my father came to America in 1915 his immigration papers identified him as a Syrian refugee from Jerusalem, Turkey. During the short-lived era of the British mandate all residents of the country, Muslim, Christian, or Jewish, Arab, Armenian, or Greek were called “Palestinian.” The large Jewish fundraising organization in America was the United Palestine Appeal (UPA). Not until 1948 did leaders of the Yishuv (Palestine Jewish community) decide to call their new state Israel.

During the latter years of the Ottoman Empire members of the Yishuv and a few Jewish immigrants established the first small Jewish settlements (called colonies) outside towns and cities like Jerusalem, Jaffa, or Tiberias. My grandfather was among them, a muktar of Beer Tuvia and Gadera. An important function of the muktar was to maintain relations with the nine surrounding Arab villages like Faluja. During World War I, my grandfather, like many of the Jewish and Arab muktars, was imprisoned in Damascus by the Ottoman authorities. After the war his family settled in Tel Aviv where he was in charge of issuing various kinds of licenses. When I visited in 1933, his house was among the first on Hayarkon Street, then a sandy beachfront, now a site of fancy boutiques, restaurants, and nightclubs. The road from the Haifa port to Tel Aviv, at the time not much more than a one-track rural camel path, is now a major several lane highway.

I next visited two years before mandatory Palestine was divided into Israel, Jerusalem, and a proposed Arab state, as a student on the G.I. Bill at the Hebrew University in Jerusalem. The day I arrived for classes, Menachem Begin’s Irgun Zvai Leumi (ETZEL) blew up the King David Hotel. Thereafter not much studying was done! Many Jewish students volunteered or were drafted into the Haganah, Etzel, or Lehi (Stern Gang) outlawed by the British Mandatory authorities. When fighting between Jews and Arabs intensified I became a “stringer” (local reporter) for NBC, working with its Middle East correspondent, John Donovan. As the date for partition approached, Tel Aviv and Jerusalem became the gathering place of the world’s leading reporters and journalists — George Polk, Homer Bigart, I.F. Stone, Robert Capa, and others. Although classes at the University on Mount Scopus were irregular and uncertain, I became acquainted with several professors who influenced my thinking about the situation — Norman Bentwich, Alfred Bonne, Ernst Simon, and Edwin Samuel (son of Lord Samuel, the first British High Commissioner of mandatory Palestine). Among those who helped shape my perspective on the impending conflict were Martin Buber and the president of Hebrew University, Judah Magnes, both ardent proponents of conciliation between the country’s Jews and Arabs. Their proposal was to establish a binational (Arab-Jewish) state rather than separate ethnic enclaves. The bi-national approach to a solution seemed more credible then and was supported by Hashomer Hatsair (later Mapam), one of the larger Jewish Zionist parties.

Although nearly all contact between Jews and Arabs was severed as a result of the conflict, I was able to maintain some connection with the “enemy” as a journalist. One of my best sources was Said Jundi, a commander of an Arab military unit and a former football star. He often had played against Jewish teams and had a Jewish Yemenite girlfriend with whom he remained in close touch despite the conflict. As fighting intensified and increasing numbers of Arabs either fled or were driven from their towns and villages, it soon became obvious that the partition of the country created a refugee problem that was to become a major, if not the major obstacle to any resolution of the conflict. I wanted to make a contribution by helping to alleviate the refugee plight. Having returned to New York during the first truce I became a volunteer with the American Friends Service Committee (Quakers) as one of their UNRPR representatives, before UNRWA was formed. The Quakers had a large unit working with thousands of refugees in Gaza. I joined a small outpost in Acre distributing UN rations to Arab refugees who fled from one village to another within the newly established Israel. Israeli military authorities were ambivalent about the work of AFSC. Some, like the military governor of western Galilee, were sympathetic, even helpful. Others, like Baruch Noy, the appointed mayor of Acre, resented what they perceived as Quaker interference in their affairs.

My association with Palestinian Arabs and Jews drew me into academia and graduate work in Middle East studies at Columbia University where I wrote my Ph.D. thesis on Israel and the Palestine Arabs supervised by Professor J.C. Hurewitz. While researching, I became acquainted with the Middle East Institute in Washington, DC which published my thesis as Israel and the Palestine Arabs. As one of the first books on the subject it was rather controversial. Lebanon once banned it; Israeli officials were none too enthusiastic about it. Since then many others have written on the subject, notably Benny Morris, whose works often have been disputed.

During the next 50 years The Middle East Journal printed nearly a score of my articles on developments in Israel and the Middle East. Several election articles were prepared in collaboration with Israelis, Sammy Smooha of Haifa University and Gideon Doron of Tel Aviv University. Doron was also co-author of my Government and Politics of Israel (Westview Press).

In 1998 the AFSC sent me and my wife, accompanied by former Haaretz Arab affairs correspondent Atallah Mansour to survey villages in Western Galilee where the Quakers had worked in 1949. According to the UN partition plan, this area was to have been part of the Arab state. However, as a result of the 1948 war, it became incorporated into the new state of Israel. In the half century since AFSC began relief operations there, the region has been transformed into a relatively modern site of Arab and Jewish cities, towns, and villages. Sixty years ago cities like Haifa and Acre had large Arab populations that effectively made them bi-national. There were few Jewish settlements in western Galilee. Acre, then mostly an Arab town, as well as the bi-national Haifa, though still “mixed,” have become Jewish rather than Arab. Now, there are nearly as many Jewish as Arab settlements in Galilee, a result of the government’s campaign to “Judaize” the region. Formerly small Arab villages have turned into towns, and towns into cities, largely because of population increase, from about 150,000 in 1949 to several times that today. Overwhelming construction, paved streets, electrification, municipal water and sewage facilities, and paralyzing traffic jams caused by thousands of motor vehicles of all kinds evidence “modernization.” Whereas 60 years ago horses, donkeys, mules, and even camels were widely used for transportation, today they are as rare as the automobile half a century ago when the Quaker jeep was often the only motor vehicle to be seen. Now multi-lane highways with connecting roads have considerably shortened distances between population centers. Signs on shops and offices appear in both Hebrew and Arabic, and often in Russian, due to the large Jewish immigration from the former Soviet Union.

The changes over the last 60 years are too numerous to count. In this special edition of MEI’s Viewpoints series, we have asked Israelis, scholars of Israel, and members of the Diaspora community to reflect on Israel’s beginnings, growing pains, and future prospects. This anthology asks Israeli intellectuals to turn their lens on Israel — an act of self-reflection in a precarious and important time.