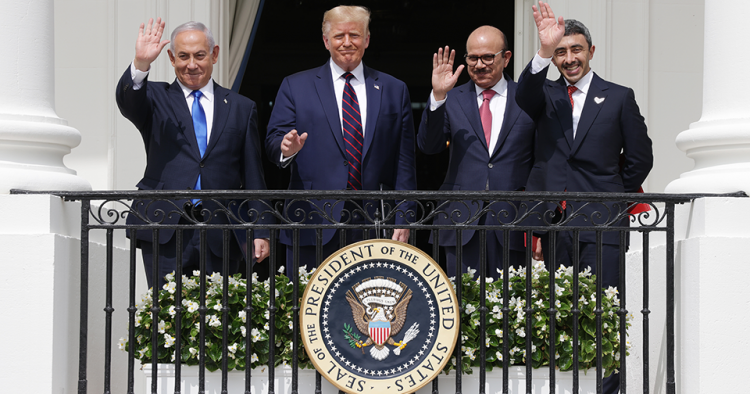 In an Aug. 13 tweet, U.S. President Donald Trump celebrated the Israeli-Emirati accord to normalize relations as a “HUGE breakthrough.” Israel’s integration into the region has been a goal of U.S. and Israeli foreign policy for decades, and the mid-August announcement was the first major official step in that direction in over 25 years. But is this really a game changer for Israel’s strategy in the Middle East?

Before assessing the potential ramifications of this development, it is important to examine why Israel and the United Arab Emirates (UAE) chose this particular moment to make official their long-standing, under-the-table, bilateral cooperation. U.S. and Israeli motivations require little explanation: The leaders of both countries have sought to promote better relations between Israel and the Arab world for decades because it is in their nations’ interests as well as their personal political interests.

The more intriguing question is why the UAE opted to change its longstanding position and become the third Arab country — after Egypt and Jordan — to establish formal ties with Israel. The UAE had previously abided by the 2002 Arab Peace Initiative, which conditions normalization on a two-state peace agreement between Israel and the Palestinians that accepts the pre-1967 boundaries and guarantees the right of return for Palestinian refugees.

There are two main reasons why Crown Prince Mohammed bin Zayed (MBZ) broke with the policy of years past. First, the Arab Peace Initiative has failed to yield progress toward Palestinian statehood. Second and more importantly, the changing strategic environment increased the benefits of normalization while reducing the risks.

The ostensible impetus for the agreement, based on MBZ’s tweet following its announcement, was “to stop further Israeli annexation of Palestinian territories.” Over the summer of 2020, Abu Dhabi made it abundantly clear that it was seeking to halt Israel’s plans to unilaterally annex parts of the West Bank, a step which has the potential to unleash domestic unrest across the Arab world, ignite conflict along Israel’s northern front, and deliver the coup de grâce to the two-state solution. Emirati opposition to annexation is unsurprising because as a status-quo power the UAE is invested in maintaining stability and order in the region. Abu Dhabi was likely also driven by two additional (and perhaps more important) motives that have more to do with Washington than Ramallah.

The first is the reinforcement of bipartisan support for the U.S.-UAE relationship in Washington to ensure its durability for the future. Among Democrats, Abu Dhabi’s close identification with the Trump administration and participation in the war in Yemen have hurt the country’s carefully cultivated image. At the same time, hawkish Republicans may raise their eyebrows at the UAE’s close cooperation with China on technological and defense issues — perhaps the most sensitive points of contention in the U.S.-China rivalry — as well as the Emirates’ discussions with Iran about how to cope with the COVID-19 crisis and calm tensions in the Gulf. The normalization agreement with Israel is a double-insurance policy for the UAE vis-à-vis Washington: The deal is labeled “the Abraham Accord” in order to portray normalization as a triumph of inter-faith peace and tolerance. This framing is meant to restore favor for the UAE among moderate Democrats who support Israel and have been perturbed by the wide gap in values between the U.S. and its Gulf allies, while also providing an electoral boost to an incumbent Republican president over a Democratic challenger who may be less forgiving. And if the deal helps to reelect Trump, he will likely be even more favorably inclined toward Abu Dhabi.

Second, with U.S. interest in the Middle East at a nadir, the UAE must become more self-reliant and reduce its dependency on long-standing U.S. security guarantees. The Emirates’ most important regional ally, Saudi Arabia, cannot be expected to provide for the UAE’s defense as it is struggling with considerable challenges of its own, chief among them its ill-fated campaign in Yemen. Thus, it is no surprise that “Little Sparta,” as the Emirates is known among U.S. generals, has decided to seek out advanced weaponry, intelligence capabilities, cyber capacity, artificial intelligence, etc. The dilemma the UAE faces is as follows: The U.S. places strict limits on the quality of what it will sell to the UAE to ensure Israel’s qualitative military edge (QME). Russia and China do not place limitations on UAE acquisitions, but such purchases would likely be of lower quality products and create severe tensions in the U.S.-UAE relationship (potentially jeopardizing what is already seen as a dubious American commitment to Gulf security). One way for the UAE to square this circle is to establish formal ties with Israel so that the U.S. will reduce restrictions that safeguard Israel’s QME.

Despite the prevalent animosity toward Israel in the Arab world, the Emiratis were wagering that the negative response to their trilateral declaration with Israel and the U.S. would be muted. Since 2010, ongoing conflicts fueled by intensifying Sunni-Shi’a sectarianism and competition between Islamist, monarchist, statist, and jihadist groups, have killed hundreds of thousands of people in the Middle East. These deadly conflicts and their destabilizing second-order effects have taken opposition to Israel off the top of most countries’ agendas, as evidenced by Arab public opinion polls from Zogby Research.

The intention of the UAE and Israel to normalize relations should also be understood within the context of a relationship that has quietly grown for years based on shared political, security, and economic interests. Cooperation and some degree of coordination between the two countries have been constant ever since Israel refrained from objecting to the U.S. sale of F-16s to the Emirates in the mid-1990s.

Since then, Israelis with second passports and front companies in Europe have conducted business with Emiratis who were only too happy to look the other way when seeking out new cyber and defense technologies. Normalization could potentially broaden the scope of commercial cooperation, but a dramatic change in economic relations seems unlikely because, presumably, most of the major deals in areas of shared interest have been going through despite the minor inconvenience of finding a dual national and registering a company outside of Israel.

One area where formalization of Israeli-Emirati relations could have a much greater impact is Israeli and American export permits on sensitive military software and hardware. Because the Emirates is geographically distant from Israel, has never fought against it, and appears less inclined than ever to do so in the foreseeable future, a careful and closely coordinated U.S.-Israel expansion of UAE access to weaponry appears warranted.

While normalization may provide a firmer footing for defense cooperation, the UAE hardly intends to become Israel’s forward operating base against Iran. If anything the UAE has been deescalating with Iran; in the months leading up to the announcement on normalization, the Emiratis had provided coronavirus assistance and dialogued with high-level Iranian officials, such as Foreign Minister Mohammed Javad Zarif. While it is true that the UAE has generally taken a hostile political approach to Iran, with which it maintains a geopolitical rivalry as well as territorial disputes, Dubai is also a major commercial and logistical partner for Iranian imports and exports to the tune of more than $13 billion per year as of 2018. Abu Dhabi’s highest national security priority is not Iran but rather the Turkey-Qatar Islamist axis, which not only directly confronts Emirati forces and partners abroad but is also believed by the regime to be the foremost threat to its own domestic stability. Israel shares the concern about Islamist forces — especially in regard to the threats in Gaza, Egypt, and Jordan — but they are secondary to the nuclear and conventional threats posed by Iran.

On the regional level, Israeli-Emirati normalization has the potential to be a game-changer for Israel, but this appears unlikely. Certainly, if the rest of the Sunni Arab world (Saudi Arabia, Oman, Kuwait, Sudan, Qatar, etc.) followed Abu Dhabi’s lead, Israel would find itself in a more favorable strategic environment and better able to focus on the highest priority threats it faces from Iran and its proxies. Unfortunately for Israel, most other countries in the region, when contemplating normalization, either gauge the threat to their stability to be too great (Saudi Arabia) or can dispense with the additional political capital in Washington because bilateral relations are already secure enough (Oman).

Israel may ultimately find that the greatest benefit from this deal is the result of its own concession: Prime Minister Netanyahu’s agreement to hold off on annexation. The plan to annex swathes of the West Bank was ill-conceived and would likely have inflicted gratuitous economic, political, and security costs at a time when Israel is struggling to cope with a coronavirus crisis, the accompanying economic devastation, and the nuclear and conventional threats posed by Iran. Annexation would have been an unnecessary distraction at best, and the cause of a major backlash, or perhaps even an armed conflict, at worst.

Even before normalization was announced on Aug. 13, Netanyahu seemed to have realized that annexation would incur unjustifiable costs, but there was legitimate concern that upcoming elections in Israel or the U.S. could push the prime minister to follow through with his promise. That would have been foolhardy for the reasons mentioned above, as well as the damage it would have inflicted on Israel’s relationship with a potential Biden administration — all for benefits that none on the Right seem able to clearly articulate. So while the UAE-Israel agreement does not resolve any of Israel's core challenges vis-à-vis Iran, by offering an exit ramp from annexation it has helped to avert a self-inflicted crisis.

Ari Heistein is a Research Fellow and Chief of Staff to the Director at the Institute for National Security Studies (INSS). His research focuses on U.S. foreign policy, the U.S.-Israel relationship, Israeli strategy vis-à-vis Iran, and the Yemeni civil war. Dr. Yoel Guzansky is a Senior Research Fellow at the INSS specializing in Gulf politics & security. The views expressed in this piece are their own.