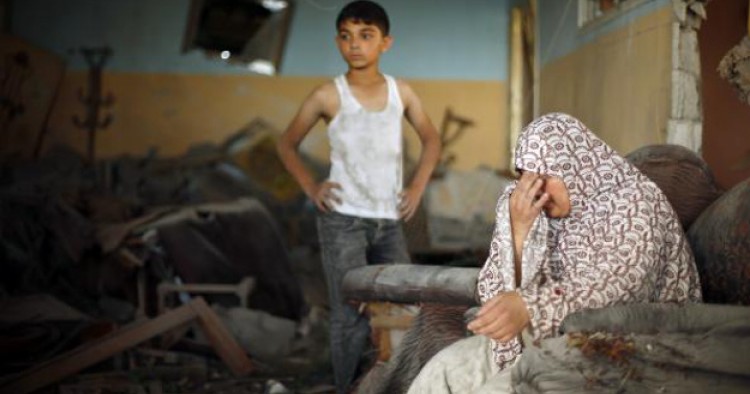 Amb. Philip Wilcox, MEI scholar and president of the Foundation for Middle East Peace, discusses the motivations that led to the current escalation of hostilities between Israel and Hamas, and why Israel decided to pursue a ground assault in Gaza.

Israel’s ground assault continues an historical pattern of dealing with threats from adversaries. How well has this strategy worked before?

It’s been a terrible failure in the past, and it has been carried out at great cost to Israel and of course to Palestine, which has borne the brunt of human death and injuries.  However, I don’t diminish the fear that Israelis feel with this persistent barrage of missiles.

The proximate cause of the war was the kidnapping of three Israeli teenagers and a draconian Israeli dragnet that rounded up about 400 Hamas operatives and sympathizers in the West Bank. And then there were missile attacks from Gaza, and Israeli responses, and it finally blew up.

Underlying these events, the current crisis is related very much to the Israeli government’s opposition to a two-state peace agreement.  Israel has worked against Palestinian unity for many years, and was determined to undermine the new unity government because, with Palestinians divided, it can continue to exercise hegemony over both the West Bank and Gaza.

The violence didn’t have to happen. It is a repetition of what has happened three other times in the last decade, all of which were futile. There was never any clear, strategic gain by either side, nor will there be this time.  Hamas cannot be destroyed now that it is an element of Palestinian politics, and the Israelis realize that even if they did, they would be faced with a much more dangerous adversary in Gaza, where there are Salafists and Islamic extremist elements.

For their part, the Hamas militants think they have no other recourse than to use these missiles.  I think they underestimate the anger and fear they are causing in the Israeli public.

How has Israel exercised control over Gaza without a military presence?

One of the means it has used since 2000 is a very tight closure of the territory’s land and maritime borders. This has choked human and economic development in Gaza. It’s a desperately poor, tiny little strip of land with 1.7 million people living on it.  They are unable to import anything more than a minimum of life sustaining food.

For a while they found some relief by building tunnels into Egypt, allowing an active smuggling trade.  After the fall of the Morsi government in Cairo, the new military regime, which opposes Hamas because it is an extension of the Muslim Brotherhood, shut down their border at Rafah.  Along with the closed Israeli border, this squeezed Gaza and put pressure on Hamas to find a solution.

The first cease-fire proposal failed because it was dictated by the Egyptians and it gave nothing to Hamas. It simply would have restored calm.  A workable cease-fire initiative would have to deal with the border closure issue in a way that Hamas could use to declare a victory.  Unless a cease-fire can offer something tangible to both sides, it will take longer to reach a solution, and in the meantime scores more people will be killed.

Israel’s strategy is to keep the Palestinian territories divided and isolated, so showing interest in easing the border crossings would be a significant shift in policy.

How far are Gazans willing to support Hamas as the death toll rises?

The Gazans have never been totally devoted to Hamas, but it did provide a level of governance which they had not had before 2007. It didn’t handle its new responsibilities very well.  It was an authoritarian government that tried to impose Islamic practices, which most Gazans despised.

But Hamas’s posing as the standard-bearer of Palestinian resistance has given it new stature and prestige, not only at the expense of Israel, but at the expense of Mahmoud Abbas, the president of Palestine, who until now hasn’t been part of a cease-fire effort. There were reports yesterday that Abbas had gone to Cairo to represent greater Palestine in negotiating a more viable cease-fire agreement.  That’s a very positive move because it would imply Hamas’s acquiescence to leadership by Abbas.  They supposedly had already committed themselves to that with the unity government deal, but I think that commitment has been an uncertain one.

Could a loss of public support impact Hamas’s willingness to continue its missile attacks on Israel?

Yes, I think it could because they’re a political organization.  They don’t feel obliged to scale back yet, but as the human toll rises, even Hamas would have to yield.  In spite of Israel’s extraordinary Iron Dome defense system, if one or two missiles get through and hit an Israeli school or hospital, there will be an even more violent reaction.

What motivated Netanyahu to move forward with the invasion despite the Iron Dome’s effectiveness?

I don’t think Netanyahu wanted the army to go into Gaza because he fears it could get bogged down and incur substantial casualties among Israeli troops. Some of his advisors on the Israeli right want a total reoccupation of Gaza. Netanyahu has experienced enough to know that would be a huge burden, and a recipe for chronic guerilla warfare. They’ve been there before and don’t want to repeat it.  They will avoid going so far into Gaza that it would be difficult to withdraw, but it’s still not going to accomplish anything. Netanyahu authorized the invasion solely for political reasons. He fears for his job.

Do you see any opportunity to return to a peace process after this flare-up has run its course?

No, I think it will be a while because both sides are so angry at each other. It’s also unlikely that President Obama would mount such an effort.  The United States has crippled itself by its inability to engage in direct diplomacy during this current crisis because its policy is not to talk to Hamas, a terrorist organization. That’s strategically unwise.

Traditionally when the United States doesn’t have a clear policy in a conflict like this, the official statement will be, “We call on all sides to exercise restraint,” and that’s effectively what Washington is now saying.  In the State Department briefing on July 17, there was a more critical tone in response to the killing of four Palestinian boys on the beach in Gaza, but for the most part, the United States has continued stressing the right of Israel to self defense. Of course it has that right, but to say that without further context or acknowledging the equal concern for the lethal violence that the Israelis carrying out on the Palestinians is not a wise policy. It should be more balanced if the United States wants to regain credibility as a mediator in the conflict.