Is it too late to save Lebanon from financial collapse? 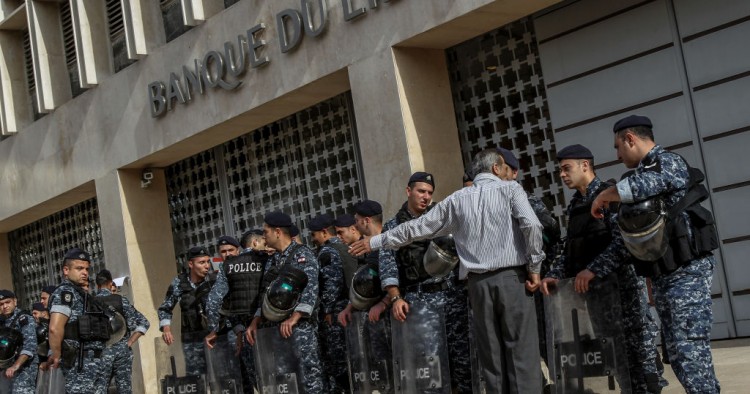 Things seem to be going from bad to worse for Lebanon's economy. On Aug. 23 Fitch downgraded the country's credit rating to CCC, meaning both it and Moody’s now rate Lebanon's bonds as junk. Ten days later, on Sept. 2, the country's top officials and bankers declared Lebanon was in a state of economic emergency and said emergency measures would be taken.

Although Lebanon’s political and security situation has been shaky for decades, its banking system and currency have so far withstood the instability. But economists and international agencies have been warning Beirut that drastic economic and financial reforms are needed. Lebanon now has the world’s third highest debt-to-GDP ratio, just behind Japan and Greece. The time is fast approaching when the Lebanese pound will be in jeopardy and the central bank’s financial engineering will no longer be enough to keep things steady, raising concerns over the long-term viability of the currency’s peg to the dollar.

In anticipation of the rating downgrade, the central bank’s governor, Riad Salameh, said proactive measures had been taken: “Nevertheless, [Banque du Liban] has, by anticipation, initiated actions to shield the financial sector from a downgrade of the sovereign risk.”

Meanwhile, a senior Finance Ministry official, speaking on condition of anonymity, warned that being classified as having junk bonds would create “a big problem” for the country.

In an interview on Sept. 4, Prime Minister Saad Hariri said, “Our strategy is to stabilize the problem that we have. Most important thing is not to deteriorate more, right?”

Historically, Lebanon has benefited from a large volume of inflows and remittances from the millions of Lebanese in the diaspora. These remittances poured into the banking system, helping to finance banks’ purchases of sovereign debt. With the Lebanese government continuing to run deficits and issue new debt, there was a constant need for large volumes of inflows, and banks were able to make outsized profits with little effort. The size of the banking system became huge compared to the overall economy, standing at around 425% of GDP.

This began to change a few years ago when economic problems in the Gulf hit Lebanese expats there hard, and they found themselves unable to send as much money back home as before. The impact was significant, as expats in the Gulf account for nearly a fifth of Lebanon’s GDP. The situation was further exacerbated by a political crisis that erupted as a result of the Syrian war, Hezbollah’s weapons, and Lebanon’s refusal to support the suspension of Damascus from the Arab League. Lebanese expats in the Gulf were targeted and hundreds were deported after Iranian-backed Hezbollah ramped up its verbal attacks on Saudi Arabia and the UAE.

The reduced inflow of remittances has raised major questions about the sustainability of this model and ramped up pressure on the central bank. To top it all off, the country has also faced “terrible” mismanagement in the public sector because of easy financing and corruption. Now, there is little to no economic growth, no job creation, and a huge twin deficit (fiscal and current account). There has also been a balance of payments problem from the time inflows took a hit. During his speech on Aug. 16, Salameh said that the total deficit for the period 2012-18 was $30 billion.

The main problem, which is discussed on a near-daily basis by economists, bankers, and government officials, is corruption. To dramatically reduce or eliminate corruption and tax evasion, which is estimated to cost Lebanon about $4.8 billion per year, change is needed at the level of both policy and the government. However, most of Lebanon’s current political class has been in power since the middle or end of the 1975-90 Civil War.

While the international community remains supportive of Lebanon and is vocal about ensuring its stability, security, and sovereignty, as long as it continues to support and work with the same officials who share responsibility for the corruption without any pressure to reform, little will change.

The pound and the peg

Just as Lebanon’s political and financial stability is at a crossroads, so too is the stability of its currency. According to the senior Finance Ministry official, it’s only a matter of time before the pound, which has been pegged to the dollar for years, depreciates. And although Salameh admitted that the peg is costly, he claims “floating the currency will undermine confidence and thus the inflows. It will also create hyperinflation.”

But how fast Lebanon hits what looks like an inevitable wall is key. A slow death is the most dangerous and one of the only solutions appears to be the intervention of the International Monetary Fund (IMF), even though Prime Minister Hariri has rejected the idea. President Michel Aoun hinted at the prospect of going to the IMF during a speech on Aug. 1, although his office put out a subsequent statement denying it.

Surely this would mean higher taxes, inflation, and the IMF’s hand on state institutions, but the current political class has proven time and again that it isn’t capable of implementing the necessary reforms. More importantly, a clear financial and economic vision must be drawn up and implemented. If not, any aid, such as the $11 billion in soft loans and grants pledged to Lebanon at the 2018 CEDRE conference, will quickly end up in the pockets of corrupt leaders.

One of the main costs draining Lebanon’s treasury are the subsidies for the state-run electricity company, Electricite du Liban, which total around $2 billion a year. The IMF and Lebanese officials have said this accounts for almost 40 percent of the annual budget deficit.

The Lebanese government and parliament have approved a new plan that is supposed to provide around-the-clock power by 2023. As of 2020, this will save the government close to $2 billion, according to Nadim Munla, Prime Minister Hariri’s economic advisor.

Hariri and his partners in government said “painful” reforms would be necessary to get the economy back on track, and the latest reports on the draft budget suggest ordinary citizens are likely to take a hit.

While the 2017 state budget ordered a hiring freeze in public institutions, it was revealed that around 5,000 people were hired in the run-up to the 2018 elections. An estimated 35 percent of the budget goes toward public sector salaries, and Salameh said that the public sector has grown to such an extent that it has become a liability for the economy.

Too little, too late?

Lebanon has not defaulted on its debt payments and its financial situation has remained relatively stable since the early 1990s, but a lack of supervision of state expenditures and increasing debt have led the country to inch toward the abyss.

The global economic situation, especially in the Gulf, means that the chances of a blind bailout or Riyadh coming to the rescue are slim. As of the end of August, however, reports were circulating in Lebanon that Arab states were preparing to place large deposits in the central bank. This would certainly help the situation in the short term, but it would also mean kicking the can further down the road without fixing the real issues.

The banks cannot be asked to bail the government out, while regular Lebanese are in no position to cough up the money to cover politicians’ wasteful spending. Backdoor deals, corruption, and tax evasion must be stopped, and this means that any loans or grants going forward must be made with the utmost transparency.

And as Salameh said, “Lebanon needs to strengthen confidence in its future. We have shown resilience in the face of adversity and negative campaigns, but now is the time to lay a vision for the future.”

Joseph Haboush is a non-resident scholar at MEI, the Lebanon & Online Desk Editor at The Daily Star, and a Middle East reporter for The Telegraph. The views expressed in this article are his own.