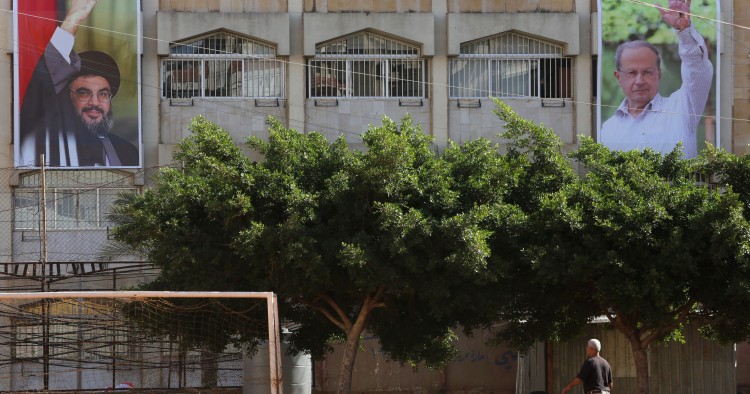 Lebanese President Michel Aoun and Hezbollah remain at loggerheads over the formation of a new government. The dispute has now entered its eighth month and the country is slowly tiptoeing towards a financial crisis.

The sticking point is the cabinet. The Iranian-backed Shi’a party is demanding representation for its allies, a group of six Sunni MPs who are generally pro-Assad. But President Aoun and Prime Minister-designate Saad Hariri have said the MPs don’t deserve a cabinet post since they did not form a unified parliamentary bloc.

Although Aoun offered to name a Sunni MP to one of the cabinet seats allocated to his party, the Free Patriotic Movement (FPM), in coordination with the six pro-Hezbollah MPs, he wanted this minister to be part of his share in the cabinet and vote in line with him and the FPM. The six Sunni MPs, however, want the minister to be an exclusive representative of their so-called “Consultative Gathering.”

The row between Aoun and the MPs is one of the first real tests of his strategic alliance with Hezbollah, established in 2006. Prior to his election as president in October 2016, the alliance seemed unbreakable. But since he assumed office and handed over the leadership of the FPM to his son-in-law, Gebran Bassil, tensions have surfaced.

Shortly before his election, Aoun formed an alliance with Hezbollah’s most outspoken critics, the Lebanese Forces (LF). On his first official visit abroad in January 2017, the president headed to Saudi Arabia in a bid to bolster ties with Riyadh, although these later soured after the detention of Hariri in November 2017. By contrast, Aoun has not visited Tehran, even though Iranian officials have repeatedly invited him. And now Hezbollah is demanding representation for its six Sunni allies in the new government. Aoun initially opposed the move, prompting Hezbollah’s allies to speak out.

Nearly eight months on from the May 2018 parliamentary elections, Aoun is still waiting for the formation of the second government of his term. Political sources close to Aoun and MPs from the FPM have said that Hezbollah is blaming the president for the delay, but Aoun has repeatedly played down the rift.

Hariri has cited his openness to Sunni representation outside of his Future Movement in allowing former rival Najib Mikati to name a Sunni minister as well as another Sunni minister to be named by Aoun.

For its part, Hezbollah is reluctant to give Aoun and FPM leader and foreign minister, Bassil, veto power or control of 11 seats in the 30-member cabinet. It is worth noting that the prime minister himself has veto power at all times as he can prevent the cabinet from meeting or resign and bring down the government.

There appeared to be a consensus candidate shortly before Christmas, but the candidate himself refused to exclusively represent the six Sunni MPs and wanted to remain independent. As a result, the Sunni MPs withdrew their support. Speaker Nabih Berri, who heads the Shi’a Amal Movement, and Hezbollah continue to demand the group be represented.

Allowing a pro-Hezbollah Sunni minister in the next government would do two things: further divide the Sunni community that has rallied around Hariri in recent months and give Damascus another ally inside the government. All six MPs are pro-Syrian and five of the six belong to other parliamentary blocs, mainly Hezbollah or Berri’s parliamentary blocs.

Hezbollah and Berri are also angry that Syria has not been invited to the Arab Economic and Social Development summit, set to be held in Beirut this weekend. Syrian outrage about the decision was evident on Dec. 10, when Syrian MP Fares Shehabi tweeted that anyone who rejects inviting it to the summit “will not dream of entering the Syrian economy in the reconstruction phase that has just begun.”

Following the reopening of the UAE Embassy in Damascus last December, Foreign Minister Bassil said in a televised speech on Jan. 4 that Lebanon must be involved in Syria’s reconstruction and the decision not to invite Syria was due to its suspension by the Arab League. He and Aoun have backed the Assad regime since the beginning of the Syrian civil war.

For a decade after the signing of the political agreement between Aoun and Hezbollah Secretary-General Hassan Nasrallah, the FPM-Hezbollah alliance was solid. This was one of the first such deals between major Lebanese Christian and Shiite parties. Among the points in the agreement was that political parties should distance themselves from regional conflicts, something Hezbollah has not abided by. Hezbollah has since received the FPM’s backing to retain its weapons and now enjoys political cover for those outside of the state’s control. In return, the FPM has had a major Shiite political partner — one that helped elevate its leader to the presidency.

But there are growing signs of cracks in the relationship. For instance, Bassil has made remarks on more than one occasion about not having a problem with Israel, much to Hezbollah’s displeasure. “To us, [Israel] isn’t an ideological cause. We are not against Israel existing with security. We are not against it,” Bassil said in a December 2017 interview. He reiterated his comments in September 2018, adding that when Lebanon accepts a peace agreement with Israel, “it means that you accept its existence.”

While the strategic alliance between Aoun and Hezbollah is unlikely to collapse, it shows no signs of returning to what it was like when Aoun headed the FPM.

Bassil’s ambitions of succeeding his father-in-law as president are no secret, but unlike Aoun he is not counting exclusively on the Shi’a, but also on the Sunnis. He built a close relationship with Nader Hariri – Saad’s cousin and former chief-of-staff – exchanging information, cooperating in areas like state energy projects, and forging an alliance between the FPM and the Future Movement in the 2018 elections.

This marks a major change for the FPM. Before becoming president, Aoun spent most of his time attacking the Hariri family and Sunni sect for what he claimed were moves to strip powers from Lebanon’s president – a Christian – and grant them to the prime minister instead. A Christian-Sunni balance long dominated Lebanese politics, but Aoun’s decision to ally with Hezbollah gave rise to a new Shiite-Christian axis.

Although its agenda is largely shaped by the personal motivations of Aoun and Bassil, the FPM is arguably Lebanon’s largest Christian party in terms of supporters. It has 29 MPs in its Strong Lebanon bloc, the largest in parliament, and more than double the number of MPs as the LF.

As the dominant party in the Christian camp, public and administrative institutions have been flooded with employees loyal to the FPM. Aoun and Bassil claim that they are restoring Christian rights once undermined during the period of Syrian hegemony. More broadly, Aoun and Bassil are eager to appear independent of foreign influence – be it American, Saudi, or Iranian.

The president and foreign minister have also supported Russia’s refugee return initiative under the argument that a majority of the 1.5 million Syrian refugees are of one confessional community, Sunni Muslim, and would thus upset the country’s delicate balance.

As the clock on his presidential term continues to wind down, Aoun is now trying to find a solution to the political impasse over the cabinet. He has not made any perceptible progress in his stated goals of strengthening the state and stamping out corruption. He desperately needs a government to take advantage of international aid promised last year at a donor conference in Paris and to show that his presidential term can bring some positive movement to the economy and the country. How this standoff over demands for additional Hezbollah and Syrian influence in the government is resolved will likely prove a turning point in his presidency.

Aoun owes Hezbollah for standing by him as its candidate during a two-year presidential vacuum, even though Berri refused to back him. But Aoun also owes the Lebanese people a president free from Hezbollah’s and Iran’s rule. This is a golden opportunity to prove he is just that and demonstrate to the West that Lebanon remains truly independent. In the meantime, Bassil will attempt to maintain his patchy relationship with Hezbollah, but his hardline Christian stance and personal political ambitions could result in a divorce with the group in the near future.