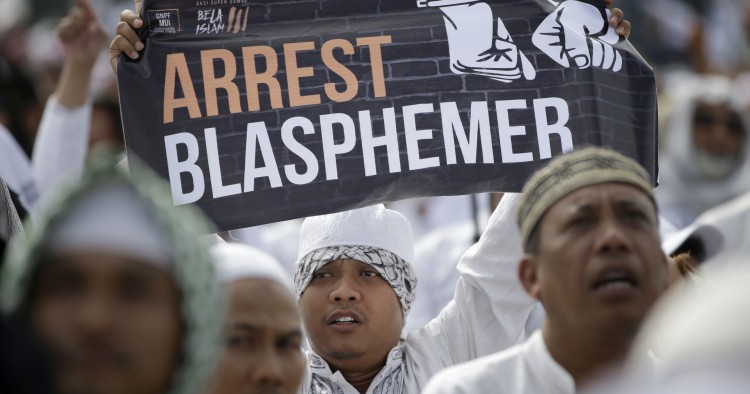 Until recently, Jakarta, the hub of Indonesian politics, was caught in the eye of a storm marked by two recent events. The first involved Jakarta’s ethnic Chinese Christian Governor Basuki Tjahaja “Ahok” Purnama, who was charged in November 2016 and later convicted of a criminal act of blasphemy against Islam.[1] There followed three massive protests — organized by a coalition of hardline Islamic groups[2] and calling for the governor’s prosecution — that paralyzed the city center and threatened to drive a wedge between the country’s Muslim majority and its three million ethnic Chinese citizens.[3] The second event was Ahok’s crushing defeat in a bid for reelection in April following a divisive campaign that gave hardliners the national stage, while those moderate Islamic organizations with far larger followings appearing, according to some commentators, as having essentially remained on the sidelines.[4]

These events raise several important questions regarding the current path and likely future of the world’s largest Muslim-majority nation. First, are the formative values and ideas of the Indonesian polity, such as separation of religion and state, the guiding national motto of Bhinneka Tunggal Ika (“unity in diversity”), tolerance and religious freedom seriously at risk? Second, to what extent is the process of democracy building in Indonesia being compromised by the growing power of Islamic actors in politics, especially hardline groups, which, though having managed to skillfully exploit democratic processes, do not necessarily share a vision of true democracy? Third, and perhaps most importantly, can Indonesia’s huge ‘Muslim mainstream’ be mobilized in order to help preserve the distinctive brand of moderate Islam and sustain the country’s transition to democracy?

Robert Hefner has argued that since the late 1980s reform-minded Muslim democrats — not secular nationalists — have been the largest, most receptive audience for democratic and pluralistic ideals.[5] This phenomenon was interwoven with the emergence of an Islamic revival in Indonesian society that produced among many Muslims a progressive understanding of Islam[6] and facilitated the emergence of a burgeoning “civil pluralist” Muslim constituency.[7] The main organizational pillars of this constituency  are the traditionalist Nahdlatul Ulama (NU) and the Islamic modernist Muhammadiyah, with a combined membership in the tens of millions.

Indeed, throughout the recent tumultuous period in Jakarta a certain degree of support and empathy for Ahok was evident within civil society, including expressions of concern about the growth of extremism and intolerance and their negative effects on social harmony, the state’s formative values of pluralism and unity, and democracy. And both  the NU and Muhammadiyah voiced disagreement with the anti-Ahok rallies.[8]

Overall, however, democratic voices seemed to be relatively subdued and their moderate pluralistic counter-messages looked somewhat feeble in comparison to the massive, robust, influential street politics of the hardline Islamists. Though much smaller in number and far less influential nationally, it was the hardline groups, in particular the Front Pembela Islam (FPI, or Islamic Defenders Front), and not the dominant, mainstream Islamic organizations which enjoyed the spotlight in recent months. Thus, wrote one Indonesian commentator following the Islamist-led protest of November 4, 2016, “we woke up to the disturbing reality that we haven’t progressed very far from nativism and tribalism.”[9]

But is such a gloomy assessment warranted? To be sure, Indonesia’s democracy is not yet fully developed. However, the country has covered a considerable distance since beginning its democratic journey in 1998, since then, especially during the early years, surmounting many hurdles, not least sectarian violence, religious extremism, and militancy. During the transition to democracy, the leading Islamic organizations, the NU and Muhammadiyah, have proved to be strong partners of democratic governance, including by joining state efforts to struggle against extreme religious ideas and doctrines.

There are preliminary indications of a growing awareness within the huge moderate Muslim mainstream of the risks and challenges represented by the recent events that shook the nation's capital. Since April the NU has spoken more loudly about the growing challenge of extremism and has taken a more proactive approach to advancing a moderate, inclusive, and moderate vision.[10] Fatayat NU, the women’s branch of the organization, has called upon women to unite against radicalism  and terrorism, including by providing their children proper religious guidance and gaining greater knowledge of technology so as to observe and supervise their children’s use of the internet, which is thought to be the main tool for spreading radical ideologies.[11] In addition, the NU announced its intention to intensify efforts during Ramadan to curb the spread of radicalism via social media and sermons in mosques, by delivering messages that also support religious diversity.[12] The  NU’s youth wing, Gerakan Pemuda Ansor (GP Ansor), also joined efforts fto counter  extremism. Three weeks after Ahok’s jailing, GP Ansor released the Gerakan Pemuda Ansor’s Declaration on Humanitarian Islam — a roadmap for re-contextualizing Islamic teachings for the modern era.[13] Luthfi Thomafi, a member of the GP Ansor board, identified the group’s larger objective as being the development of  “an international network leading to the emergence of a global movement which shall be dedicated to the well-being of humanity as a whole — and to the fostering of a truly global civilisation — inspired by ‘humanitarian Islam’ …”[14]

Since it is the traditionalist NU in particular which has been strongly identified with Indonesia’s distinctive Islamic identity, it will be interesting to watch for its next moves. Recall that about two years ago, the NU launched a new initiative to promote globally, and to the Middle East in particular, the concept of Islam Nusantara (the Islam of the Indonesian Archipelago) — as a multifaceted message of a tolerant, moderate, peaceful Islam for curbing terror and extremism. This initiative seemed to reflect also a  conviction that joining forces to tamp down the flames of conflict, violence and religious extremism in the Middle East would likely reduce the risks of extremism and terror in the archipelago itself.[15]

To date, however, there is no evidence that Islam Nusantara has made inroads into the discourse in the Middle East. Certainly the NU’s initiative faces some intrinsic difficulties, significant among them being the nature of Indonesian Islam, which is deeply anchored in the particularities of the local context. However, the NU leadership seems to rightly realize that, both because and in spite of the extremism and widespread conflict that has gripped the Middle East, diverse state and society actors   in the region are seeking solutions to this predicament, including by reforming Islamic discourse in the Sunni Muslim context, embracing tolerance, solving conflicts peacefully, and advancing religious co-existence and interfaith dialogue.

Therefore, it is possible that the NU will find partners within the diverse religious circles of the Arab world, including among ruling elites. In Egypt, for example, it is President ‘Abd al-Fatah al-Sisi himself who has called upon Muslims to realize a “religious revolution,” that is, a renewal of religious discourse in accordance with the tolerant Islamic religion. He also urged the religious establishment to do more to combat extremism and militancy, including by promoting a moderate interpretation of Islam.[16] Another potential partner for NU is Egypt’s Al-Azhar University, the chief center of Islamic and Arabic learning in the Sunni world. Potential allies in the struggle against extremism and for advancing religious moderation and tolerance can also be found in Jordan, including within the Hashemite royal family itself, as well as within the Moroccan monarchy. Yet another possible partner is Tunisia, which conducted with Indonesia a dialogue on transition to democracy and whose prospects for achieving true democracy are higher than any of other countries affected by the Arab Spring. The Al-Nahda Party — which has exhibited moderation and a willingness to collaborate with others to build democracy — might cooperate with the NU. In fact, Rachid al-Ghannouchi, the party’s founder and the head, has praised  Indonesia for having built a model that combines Islam and modernity.[17]

But it is important to emphasize that NU’s initiative is aimed not simply at ‘exporting’ the moderate message of Islam Nusantara to the Muslim world. It is aimed above all at responding to local threats of extremism. Indeed, the recent developments in Jakarta further illustrate that these threats are real. One Indonesian scholar, for example, delivered a stinging rebuke to pro-pluralism supporters, whom he accused of limiting their involvement to  social media discussion on democracy, intellectual seminars and television commentaries, while avoiding a strong activism on the ground to counter the Islamist-led mass protest against Ahok of last early November.[18]

Ideals should be translated into action through vigorous, robust action. Leaving the mass protests and campaign against Ahok unchallenged places Indonesia’s formative values, national identity, and democratic project at risk. The NU is not the only Indonesian civil society actor seeking to promote a moderate Islamic message to the Muslim world with the aim of curbing extremism. Muhammadiyah, too, has ‘gone global,’ promoting ideas and projects aimed at fostering democracy, pluralism, interfaith and inter-civilizational dialogue, and conflict resolution. But such activities are likely to be more effective when combined with others’ efforts. Indeed, by joining hands and acting in tandem, Indonesia’s two largest mainstream Muslim organizations stand a better chance of countering extremist elements at home, and partnering with like-minded groups and governments in the Middle East and elsewhere.