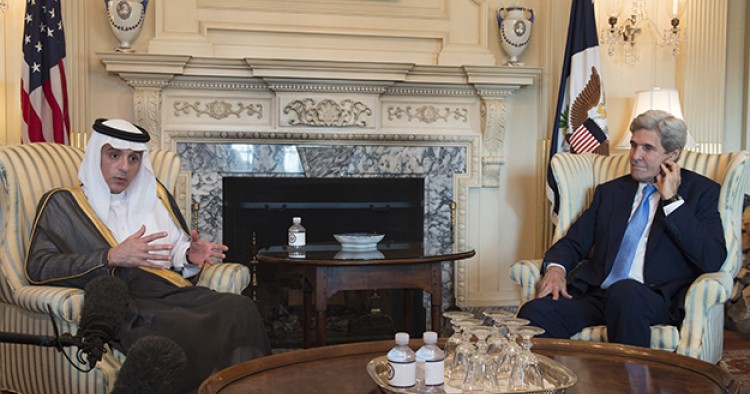 When Osama bin Laden carefully recruited a number of Saudis to carry out the 9/11 attacks, his intention was to drive a wedge between his two enemies, the United States and the Saudi government. Fifteen years after the attacks, the JASTA legislation appears to be doing just that.

The Saudi government reacted rapidly after Congress overwhelmingly voted to override President Barack Obama’s veto of the Justice Against Sponsors of Terrorism Act (JASTA) last month, as evidenced by foreign minister Adel al-Jubeir’s trip to Washington last week. After making the circuit of Hill offices, Jubeir came to the State Department for a meeting with Secretary John Kerry, but what he heard there could hardly have been reassuring. In their press availability, Kerry volunteered that the two had discussed sovereign immunity and the importance of finding a fix to JASTA “that respects and honors the needs and rights of 9/11 victims but at the same time does not expose American troops and American partners and American individuals who may be involved in another country to the potential of a lawsuit for those (sic) activities.”  For two countries that have been partners in the fight against al-Qaeda and ISIS, the statement was decidedly one-sided.

It must undoubtedly have been jarring for Saudi Arabia’s most senior diplomat to listen to his American counterpart as he described the negative effects of the legislation entirely in terms of U.S. interests, without mentioning at all the impact it could have on Saudi Arabia or U.S.-Saudi relations. Indeed, the import of the secretary’s words were not lost on the Saudis. At a panel discussion on JASTA sponsored by the Arab Gulf States Institute (A.G.S.I.W.) the next day, Prince Turki Al Faisal expressed anger over Kerry’s emphasis on fixing the law so that U.S. personnel and interests could not be targeted. The secretary’s remarks will only reinforce Saudi displeasure over what they long assessed as inadequate administration efforts to defeat JASTA in Congress.

Despite the sweeping Congressional rejection of the president’s veto, the question remains whether JASTA can or will ever be enforced in a court of law. Panelists at the A.G.S.I.W. discussion noted that the legislation appears to infringe on the president’s constitutional power to conduct foreign policy, particularly as it does not include presidential waiver authority. While it appears unlikely that the Obama administration will challenge the legislation in court, the next administration may decide to adopt a more assertive position in protecting executive branch foreign policy prerogatives.

Moreover, there are evidentiary hurdles. Stuart Newberger, a partner in the law firm of Crowell & Moring, with experience representing victims of terror attacks, wrote in The Hill, October 24, that JASTA imposes a higher standard of proof than the previous standard for State Sponsors of Terrorism. For example, it now requires victims to show “that the foreign state actually ‘conspired’ with the terrorists, or ‘aided and abetted’ their conduct.” This, Newberger concludes, “may be difficult.”

In fact, although advocates for the JASTA legislation, like former Senator Bob Graham, insist that the famous 28 pages contained in a Congressional report on 9/11 (not to be confused with the official 9/11 Commission chaired by Lee Hamilton and Thomas Kean) provide “a sliver” of the truth about alleged Saudi official involvement in support of the 9/11 hijackers, those assertions are far from dispositive. Indeed, Hamilton and Kean wrote in an op-ed piece in USA Today that their commission review of all of the relevant evidence, including the 28 pages, concluded that there is “no evidence that the Saudi government as an institution or senior Saudi officials individually funded al-Qaeda.” They also noted that a second, independent panel created by Congress reviewed the evidence and similarly concluded that there was no evidence against the Saudi government.

Undoubtedly, lawyers for the plaintiffs are well aware of the obstacles that they will face even getting the case a hearing in court, let alone actually succeeding in proving beyond reasonable doubt official Saudi culpability in the 9/11 attack, when US government investigations have concluded otherwise. Years or even decades of litigation may proceed any hearing on the merits of the case. Why then did they press for the legislation so vigorously with their friends in Congress? The most likely explanation is that they have no expectation that they will need to take the case to court. Instead, they see JASTA as yet another lever, along with the 28 pages, to force the Saudis to agree to a multi-billion dollar settlement out of court. For their part, however, the Saudis could not have been clearer in their declarations that Saudi Arabia is absolutely innocent of the charges of involvement in the 9/11 attacks, and, therefore, will never agree to such a settlement.

Unless the next administration pushes back aggressively against JASTA, the net result is likely to be a new point of friction between the United States and Saudi Arabia. This will offer no relief to the 9/11 victims, but instead will complicate the ability of the two countries to cooperate on critical issues related to regional security and stability.