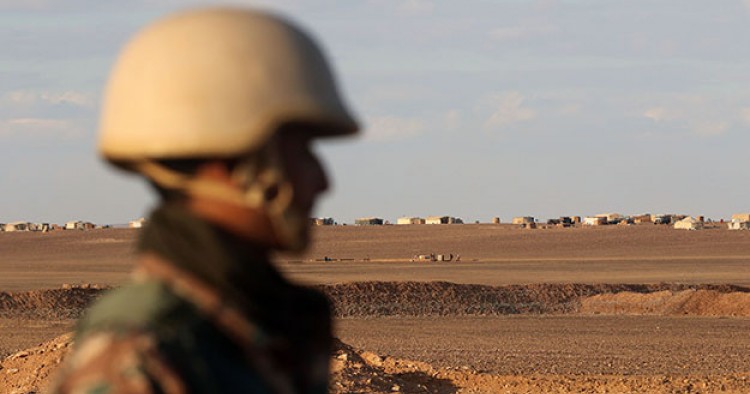 Two major events in the past few weeks have come into play regarding the future of a de-escalation zone in southern Syria from a Jordanian perspective. The first was the Western coalition’s missile strike on April 13 against Syrian regime positions in retaliation for an alleged chemical attack in the besieged Eastern Ghouta that took place on April 7.

Even though Jordanians remain unevenly divided between those supporting the regime of Syrian President Bashar al-Assad and those against it—with the majority belonging to the latter group—the strikes were largely seen by Jordanians as unjustified and as a blatant act of aggression. Public opinion is becoming suspicious of U.S. and Israeli objectives in war-torn Syria. While the government avoided commenting on the strike, Jordanians expressed opinions on social media outlets that mostly denounced the strikes, which came few days after Israeli jets bombed a Syrian airbase in southern Syria.

The second event was the success by the regime and its allies in reclaiming most areas in eastern and southern Damascus, thus raising concerns that the government’s next military target would be the rebel-held southern province of Daraa along the Jordanian border.

The de-escalation zone in southern Syria was agreed upon by Jordan, the U.S. and Russia last November. It has beenpraised repeatedly by King Abdullah and senior Jordanian officials as the most successful cease-fire agreement in Syria.

A change in public mood in Jordan and concern over the future of rebel-held southern Syria may compel the Jordanian government to reconsider its policy on Syria. There are signs that Amman is moving to improve relations with the Syrian regime. On April 8, Speaker of the Lower House of the Jordanian parliament, Atef al-Tarawneh, told an Egyptian newspaper that Amman and Damascus are engaged in security coordination along their common borders and that Jordan support efforts to allow the Syrian regime to take back its seat in the Arab League.

And on May 8, a Jordanian business delegation arrived in Damascus for the first time in five years to discuss ways to restore commercial and industrial ties between the two countries.

In addition, Jordan has put pressure on Syrian rebels in Daraa to hand over the border crossing between the two countries, closed since 2015, to the Syrian government. Meanwhile, Jordan maintains diplomatic ties with Syria and has allowed the Syrian embassy to remain open.

The shift in Jordan’s position towards the regime may even accelerate following statements by a number of Western and Arab leaders that regime change in Syria is no longer a goal. The latest concession came from Saudi Crown Prince Mohammad Bin Salman who told Time magazine on March 30 that Assad “will more than likely remain in office.” The Saudi pivot has vindicated the Jordanian position, which dropped demands for regime change early in the crisis and adopted a moderate stand that called for a political solution to end Syria’s civil war. Jordan openly backed the Russian intervention in Syria in 2015 believing that Moscow had the means to put pressure on the regime to adopt a political settlement.

Jordan’s keenness on preserving the cease-fire in southern Syria takes top priority as a national security goal. The kingdom has made it clear that it has reached a saturation point with regard to hosting Syrian refugees, now numbering over 600,000. Furthermore, Jordan has insisted that its support for moderate rebels in southern Syria is not directed at the regime, but at preventing Islamic State fighters and pro-Iran militias from coming close to its borders.

More recently, Jordan’s Foreign Minister Ayman Safadi, who was in Moscow on May 3, denied Russian accusations that military aid to the rebels was passing through Jordanian borders, or that attacks against Syrian targets were carried out from Jordanian bases. Forhis part, Russian Foreign Minister Sergey Lavrov assured Safadi that Moscow remained committed to the de-escalation zone in southern Syria.

A similar assurance was made earlier by Secretary of State Mike Pompeo during a visit to Amman on April 30.

But Amman remains worried that Assad might have other plans. After the regime’s success in Eastern Ghouta, some reports suggested that Assad will order his forces to march to the south, where moderate rebels occupy a number of enclaves in Daraa and Sweida provinces. Al-Qaeda’s Syria affiliate holds pockets in Quneitra, along the Golan Heights, while an ISIS proxy, Jaish Khaled Ibn al-Walid,is lodged in the Yarmouk River basin, close to the Jordanian and Israeli borders.

Israel, which has criticized the cease-fire agreement for not doing enough to push back Iranian militias, has escalated its military operations in southern Syria. An open confrontation between Israel and Iran in Syria will threaten the future of the southern zone and complicate Jordanian goals.

For Amman, the ideal solution would be to reach an agreement with Damascus where moderate rebel groups would strike reconciliation deals that would allow a peaceful takeover by the Syrian army of the borders with Jordan. This would allow the borders to open and normalize ties with the regime. But with so many players in the south, each with its own agenda, and with a polarized Jordanian public, this may prove to be easier said than done.