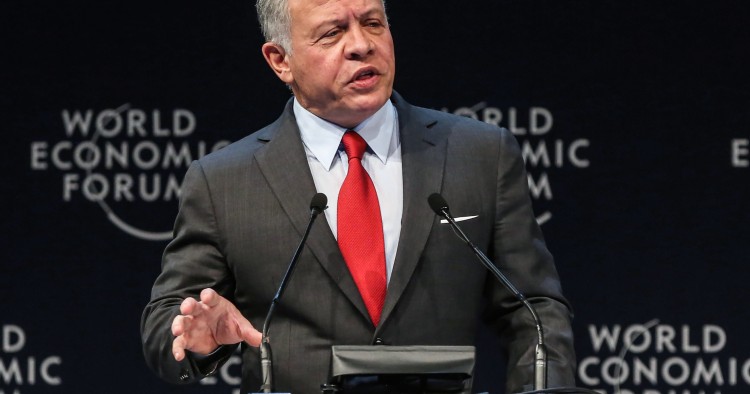 Jordan’s King Abdullah is mobilizing his people ahead of the expected June unveiling of President Donald Trump’s much touted Middle East peace plan, which aims to put an end to decades of Arab-Israeli conflict. Since returning from a working visit to Washington in March where he met with Trump’s peace team, led by his son-in-law Jared Kushner, as well as US lawmakers, King Abdullah has been unusually vociferous in his defense of his position on the fate of East Jerusalem, especially the Hashemite custodianship of the Muslim and Christian holy places in the Old City, and his rejection of any plan that would undermine Jordan’s stability.

The king has been holding regular meetings with local officials, heads of tribes, and media figures at the royal palace and visiting provinces across the kingdom. On March 21, while visiting the Zarqa governorate outside Amman, King Abdullah vowed to keep protecting Islamic and Christian holy sites in Jerusalem, calling it a “red line.” He also revealed that he was under pressure to alter Jordan’s historic role as custodian of the Jerusalem holy sites. While he did not specify what kind of pressure he was facing, he declared that “I will never change my position toward Jerusalem in my life,” adding that “all my people are with me.”

In addition to his position on Jerusalem, the king voiced his rejection of attempts to settle Palestinian refugees in the kingdom, thus sacrificing the right of return, and to turning Jordan into an alternative Palestinian state — the so-called Jordanian option. The last two issues hit a raw nerve, especially among East Bank Jordanians, who over the decades have feared that a final resolution of the Palestinian issue would come at their expense.

Far-right Israeli politicians have often claimed that Jordan, where millions of Palestinians reside both as citizens and refugees, is a de facto Palestinian state. But by signing a historic peace treaty with Israel in 1994, Jordanian officials declared the so-called Jordan option was buried for good.

King Abdullah has been an adamant backer of the two-state solution, even as Trump’s election in 2016 signaled a major departure from decades of official U.S. policy on the Israel-Palestine conflict. Initially, the king believed that his close ties with U.S. lawmakers, on both sides of the aisle, would rein in the White House while sustaining international support for a negotiated settlement that will deliver an independent Palestinian state with East Jerusalem as its capital.

But Trump, with his strong backing for Israeli Prime Minister Benjamin Netanyahu, was quick to distance himself from the two-state formula. Then he took the controversial and unilateral decision in December 2017 to recognize Jerusalem as Israel’s capital and to relocate the U.S. embassy there. For the Palestinians, and King Abdullah, the fate of East Jerusalem lies at the heart of final status issues that would be resolved through negotiations. Trump’s unilateral move had effectively taken Jerusalem off the negotiating table — something that previous U.S. presidential candidates had vowed to do, only to back off when elected.

Despite Jordan’s reliance on U.S. economic and military aid — about $1.5 billion annually — King Abdullah did not shy away from openly and strongly criticizing Trump’s moves. Jordan took the lead in rallying international support for the UN Relief and Works Agency for Palestine (UNRWA), which is responsible for Palestinian refugees, when the U.S. suspended financial contributions to its budget in 2018. Defunding UNRWA was seen as another step by the U.S. to take the fate of Palestinian refugees off the table. More seriously, it meant that Jordan and other host countries would be forced to settle Palestinian refugees and accept them as citizens with full rights.

In the early stages of putting Trump’s plan together, the king tried to influence Kushner and his partner, U.S. Middle East envoy Jason Greenblatt, by meeting with them repeatedly when they visited the region. While officially Jordan says it has not been informed of the details of the so-called “Deal of the Century,” it is clear that the king’s meeting with Kushner last March did not go well.

Diplomatic sources say that the king complained to members of the Senate’s Foreign Relations Committee of the level of consultation with the White House. He sounded pessimistic over the prospects of the success of Trump’s offer, describing it as more of an economic deal than a peace plan. He also expressed disappointment that he was not briefed on aspects of the plan that concern Jordanian interests.

By mobilizing his citizens, King Abdullah is sending a message to the U.S., Israel, and even to those Arab states that might be tempted to consider Trump’s proposed plan. Since his Zarqa speech, Jordanians have been holding marches in support of the king. His meeting recently with lawmakers from the Muslim Brotherhood was seen as a step toward solidifying the domestic front. He has also been on the receiving end of support for his role in Jerusalem from Turkey, Greece, Cyprus, and Qatar, as well as from the Arab League.

While his fears of what the plan would contain are real, the king also worries that it would polarize Arab states and divide the international community over support for the two-state solution. And he views Netanyahu’s recent electoral victory as an added risk. Netanyahu had vowed to annex parts of the West Bank and his relationship with Jordan, especially in relation to the kingdom’s role at the Temple Mount and al-Aqsa Mosque, has always been tense.

By rallying his people now, King Abdullah is preparing for the difficult days ahead. Aside from the Palestinians, Jordan stands to lose the most if the proposed plan does affect the king’s role in Jerusalem or the fate of more than two million Palestinian refugees residing in the kingdom.

But the question remains: How will he react to the plan once it is officially released? The proposed timing of its unveiling could not be worse for Jordan economically. The kingdom is battling an 18 percent unemployment rate, 15 percent poverty rate, slow economic growth, a rising cost of living, and more than $30 billion in foreign debt. It certainly cannot afford to find itself at odds with a temperamental U.S. president who does not like to be opposed.

And it appears the White House is seeking to assure King Abdullah ahead of the release of the plan. On April 24, Greenblatt put out a tweet that was basically addressed to the king. It said: “@KingAbdullahII & #Jordan are strong US allies. Rumors that our peace vision includes a confederation between Jordan, Israel & the PA, or that the vision contemplates making Jordan the homeland for Palestinians, are incorrect. Please don’t spread rumors.”

This should go some way in allaying Jordanian fears.