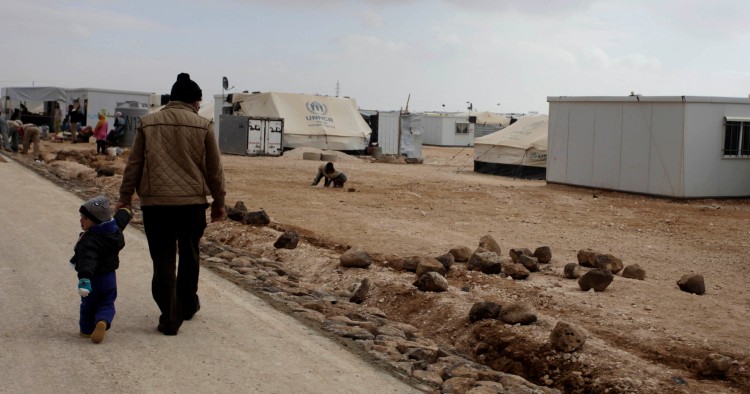 At a time when Arab governments across the region unveil grand economic reform ‘visions,’ Jordan has launched its own bold scheme to revive its faltering economy. Jordan is looking for a cure to what many Jordanians consider an economic burden: over 1.2 million Syrian migrants due to the war next door.

Jordan is in the midst of trying to grapple with the influx of Syrian refugees, while staring blankly into the very real possibility of a major debt crisis. Jordan’s public debt has nearly doubled from $18.9 billion when the Syrian crisis began in 2011 to $35.2 billion this year. The Hashemite kingdom is set to run a $1.27 billion deficit in this year’s budget, which, combined with the over $600 million deficit run by subsidized electricity and water services, places the total deficit at $1.8 billion.

Alarmingly, Jordan’s debt-to-G.D.P. ratio has risen to 90 percent. Other indicators of economic health have been just as worrying. Official statistics peg unemployment at around 14 percent—unofficial estimates place it around 20 percent—with youth unemployment hovering at 30 percent.

While the Syrian influx has added strain to the economy, the root causes of Jordan’s economic ailments are not Syrian refugees. In 2011, the kingdom ran a $1.44 billion budget deficit, well before the first Syrians began fleeing over the border. Jordan’s $1.27 billion in received foreign aid in 2016, combined with additional humanitarian aid and the budget of aid agencies, is expected to help offset the $2.5 billion cost of hosting Syrian refugees in 2016 as estimated by the World Bank.

Jordan’s current economic crisis is largely attributable to structural constraints and domestic policies, including a bloated public sector and a failure to find durable energy solutions, which have only been exacerbated by the Syrian crisis.

Jordan can trace the jump in public debt to instability in Egypt, which had since 2002 under former President Hosni Mubarak provided the resource-poor kingdom with natural gas at below market rates in return for political support. Following Mubarak’s ouster in February 2011, a series of monthly acts of sabotage on the main gas pipeline running through the Sinai to Jordan forced Amman to end its reliance on Egyptian gas, and for the first time in decades, purchase oil at international market prices to generate electricity.

The Arab Spring politically constrained authorities from raising electricity prices on a population already hitting the streets in weekly protests, prompting Amman to pay the difference in fuel import costs and the subsidized electricity given to Jordanians.  In 2016, Jordan’s budget set aside $2.8 billion—a staggering7 percent of G.D.P—in subsidies for electricity, water, bread, cooking gas and fodder, and has averaged an unsustainable $2.8-3 billion subsidy bill over the past three years.

Over a five year period, from 2011-2016, NEPCO, the national electric power company, accumulated $7 billion in debt—a sum the government is unlikely to recover. To avoid antagonizing protesters, the government instead enacted a gradually increasing tariff in 2014 where the largest electricity consumers were charged the highest rates—a move that penalized industries, large companies, mines, hotels and the banking sector.

Complicating matters further, the Jordanian government has capped the limit individuals and companies can generate from renewable energy, blocking several factories and foreign companies from installing solar panels to generate their electricity needs.  The intention is to force companies to rely on NEPCO to ensure the power company receives the needed revenue to cover its debt, as opposed to allowing companies to generate their own electricity. Power costs have hindered the competitiveness of companies, leading several foreign companies to privately threaten to pull out of Jordan.

It is against this backdrop of soaring debt and stifling growth that Amman is opening discussions with the International Monetary Fund for an Extended Fund Facility this May, viewed by Jordan as critical to its near- and long-term economic plans. Under the facility, the I.M.F. would release $700-$800 million to the Central Bank of Jordan. Critically, the Facility will aid Jordan in securing badly-needed concessional financing over the next few years, which would be used to close its growing debt gap.

In return, the I.M.F. is seeking a series of reforms ranging from cutting public spending to raising the percentage of women in the labor market. The I.M.F. is requesting Jordan to cut its debt-to-G.D.P. ratio from 90 percent of G.D.P., to 80 percent of G.D.P. by 2021. Perhaps most ambitiously, the I.M.F. is requiring Jordan to post a growth rate of 5-6 percent annually over the next five years. This is a tall order given that Jordan has averaged a 2-2.8 percent growth rate over the past 15 years and is set to come in at 2.7 percent in 2016, below expectations. Under current economic trends, Jordan will not be able to meet its reform benchmarks.

Tapping into the Refugee Economy

The government has found, what it believes, to be the answer: put Syrians to work. The idea, once seen as politically untenable, culminated in the Jordan Compact, an agreement reached by the international community and Jordan in London in February. Under the compact, the international community agreed to provide a $2.1 billion aid package to Jordan from 2016-18 on the condition Amman creates jobs for Syrians, who for the past five years have been barred from legally working in the kingdom.

In return, multilateral development banks have offered as much as $1.9 billion in concessional financing, and the E.U. has agreed to wave taxes and quotas, and revise rules of origins to receive for products created by Syrians.

As part of the agreement, Jordan, through private investors, will set up several industrial zones across the country to produce goods to send to E.U. markets free of taxes, customs and quotas. Their goal: to create as many as 200,000 jobs over the next five years.

The scheme, as Jordanian officials like to say, aims to ’turn a refugee crisis into a development opportunity,’ or to put it more precisely: to take economic lemons and make lemonade, and then sell it onto European markets without restrictions. Jordanians, they say, are free to join Syrians in the industrial zones, although many envision citizens taking up managerial posts. As a second, parallel track agreed upon in the London conference, Jordan will allow legal employment for the hundreds of thousands of Syrians outside the zones, without putting them in direct competition with Jordanians.

Jordan will do this by opening up sectors dominated by foreign labor to Syrians, gradually phasing out foreign workers who send the vast majority of their remittances home, such as Egyptians, with Syrians settling into a more permanent stay in Jordan. Jordan is already granting work permits for Syrians in agriculture (7 percent of positions held by Jordanians), construction (3 percent Jordanians), and manual labor services such as cleaners and gas station attendants (less than 1 percent). Meanwhile, the government is allowing Syrians to formalize and register their grey market businesses.

Steady and secure wages for Syrians, so the thinking goes, will lead to increased consumer spending within the Jordanian economy. The regulation of Syrians working in the grey economy, over half of whom earn less than the minimum wage of $210 per month, would drive up wages across the board. But more importantly for the government, Syrian workers and their employers will pay permit fees and taxes, generating badly needed revenue for a government looking to cut into its debt.

Jordan is betting that the Syrian employment scheme will pay for its grander development plan, Jordan Vision 2025, which calls for building an investment-friendly climate and the overhaul of the country’s water, health, energy and transport sectors. Furthermore, the government believes revenues and the economic growth spurred by job creation will help Jordan meet its I.M.F. benchmarks.

There remains, however, certain variables with the Syrian employment scheme, such as whether the country can succeed in attracting the private investment needed to generate production in the industrial zones. The other unknown is whether Jordan will be able to transition Syrian workers from the grey market to regulated employment, and how long such a process will take. Authorities also need to be mindful of any social tensions such a policy could instigate should local Jordanians, themselves suffering from high unemployment, view the strategy as favoring Syrians over Jordanians.

Jordan’s Syrian employment scheme is the country’s boldest plan in years, but its main shortcoming is that it once again relies entirely on the generosity of the international donor community, which has kept the country’s economy afloat for years. It is this very reliance on international aid—Gulf, American, European or otherwise—that has enabled the short-sighted decision-making, refusal to reform the energy sector, extension of unsustainable subsidies and investment-crippling tax policies that has led Jordan to its current debt crisis.

To believe that the international community, which has failed to live up to Syrian refugee pledges in the past (only 37 percent of Jordan’s Syrian refugee response plan was funded in 2015), could be counted on to help transform an economy in need of deep-seated reform, is optimistic.

Jordan’s clearest path to a sustainable, investment-driven economy runs through the Gulf as well as Europe. Should Jordan provide tax incentives and a business-friendly environment, the kingdom can become a leading destination for a growing number of Gulf states building sovereign wealth funds to divert their oil wealth to long-term investments abroad.

Jordan has already taken steps to attract the Saudi Arabia’s Public Investment Fund by forming a joint coordination council with Riyadh in April to oversee billions of dollars in long-term investments and mega-projects in Jordan. As part of these efforts, Amman is pushing through the establishment of the Jordan Investment Fund, a semi-governmental body that would facilitate investments from sovereign wealth funds in national projects such as the national railway, the country’s electricity grid, uranium mining and crude oil pipelines. The Fund will also have the power to grant incentives and exemptions in mega-projects.

While this is a welcome development, Jordan must also look beyond mega-projects and Syrian employment schemes if it is to boost economic growth to 5 percent annually and build its private sector. Megaprojects can take several years to get off the ground and may have to wait until sovereign funds, such as Saudi’s Public Investment Fund, build their capital.

Amman must shift focus to find ways to boost small- and medium-size enterprises (S.M.E.s), which account for nearly 95 percent of the Jordanian private sector and 40 percent of G.D.P. By and large, S.M.E.s are penalized by paying larger electricity bills and steep customs and import taxes, which are waved for special economic zones and megaprojects. Amman should find a way to extend some of the incentives granted to the economic zones to S.M.E.s, and use some of its concessional financing to help would-be Jordanian innovators and business owners.

Instead of its ongoing reliance on customs duties and taxes for revenue, Jordan can trim its deficit by cutting the number of independent public entities—the 64 commissions, bureaus and other public bodies with overlapping duties that cost Jordan $2.6 billion each year. In the end, Jordan must do the inevitable, and raise electricity tariffs to more accurately reflect generation costs and review its water subsidy.

As the kingdom teeters on the brink of a debt crisis, Jordan should neither look to Syrian migrants as the root cause nor the sole solution to the country’s economic woes. If anything, the Syrian crisis has only exposed the structural flaws in Jordan’s economy that are unsustainable and urgently need repair.